What do the below values mean?

FYI, the tubes sound great. Just wondering if these numbers mean they’re not balanced or low-noise. 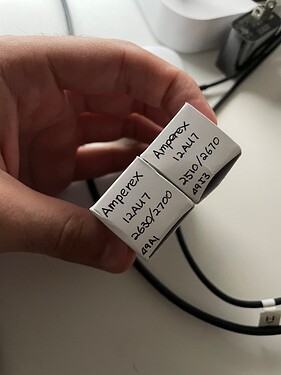 thaqts the results of the tubes being tested to see how close to new they still are.

Thanks, I think that would make more sense if the denominator on each box were the same.

tubes are rarely the same. the process to make one and the end result isnt the most precise.

edit: NoS tubes are typically 60+ years old at this point. variable amounts of degradation over time as well.

The 12AU7 is a dual triode.
Like having two tubes inside of one glass bottle. Well it is!

These measurements tell you how close the two sections are matched.

Thanks for the thorough explanation! Is it safe to say these tubes don’t have balanced triodes?

The tubes when made have both sets of internals in there.
When measured for gain and performance even though they are made at the same time
from the same “stuff” there are small differences. These show up in these measurements.

“IF” the tester has tested correctly and carefully the measurements will show how close these two different internal structure perform.

There are no “balanced tubes”. Closely matched sections is as close to what your probably thinking.

A tube is a tube, with one or two structures like in you 12AU7.

Balanced in audio vs SE is a different thing all together.

It sure does, thanks again

there are tubes with 2, 3, 4, and 5 internal cathodes. single cathode tubes dont seem to be used in audio i am aware of. a cathode is a positively charged material. you heat it up to release the electrons and turn them into a signal. over time, less and less electrons are released and there are less and less to release. once used, they are turned into audio, or more likely, just heat.

when they test, thats what they are testing for. how many of those electrons are left to be used.

edit: and not literally

thats the value given not literal translation

The heated cathode is the source of electrons for sure, but the heat alone doesnt make them flow to the plate.

It takes a properly charged voltage applied to start the emission or flow of electrons.
The grid then can act as a gate to increase or decrease this flow…
hence “amplification”…

Simply simple devices!
Its all a vacuum to me!