This question is actually regarding the Schiit products, but I am also wondering in general. My Schiit product should be the new USB 5th gen.

Which connection is better? USB or optical? I’ve heard arguments for both. Some expert mentioned that optical is horrible by design/implementation.

I would say for the schiit usb tbh, but realistically you won’t hear a significant difference

How can I tell if I have the 5th gen USB? My sound control on my PC states “Bifrost 5” does that count?

Yeah I think so. My main reasoning for using USB is because schiit touts it as being improved, so they put care into their usb.

All 2 (arguably 3) connections are digital protocols, so no signal loss along the way (it either works, or doesn’t).
Unless you are working in an RF lab, then toslink wins.

USB and SPDIF are more rugged connector wise than Toslink. Does not matter.

Some expert mentioned that optical is horrible by design/implementation.

ADAT is a common system for audio in studios (same connector as Toslink), Fiber connects modern data centers (400Gbit/s ftw), so either the SPDIF protocol is bad (doubt that) or someone does not know their stuff.

I mainly use AES/EBU for my stuff

The main complaints with optical is jitter/time domain issues for some reason. Also people don’t like how the clock and stuff like that are in a combined signal that has to be separated by the device. That’s why I2S was created

I actually recently discovered my TV was sending out a SPDIF signal with bad jitter (Or something). I noticed it when I plugged my phone into the D70 DAC though USB and tried playing music through it and noticed things were sounding noticeably cleaner than what I’m used to…
Thought it might be placebo so I ended up testing things by doing USB direct to my PC and then back to toslink through the TVs output… Then I tried an HDMI Audio extractor I already had from the TVs ARC HDMI output, which converted the signal to SPDIF itself… and the issue was gone. Could not longer hear a difference between Optical and USB. So I’d say it’s worth being at least slightly wary of possible jitter issues with SPDIF outputs.

That’s what I heard in a podcast, that optical by nature has terrible jitter.

Right, the breakout box I used that converts the ARC HDMI signal to optical sounds fine and 1:1 with the USB as far as I can hear. It was only the optical output directly from the TV that had the issue.

That’s what I heard in a podcast, that optical by nature has terrible jitter.

From some devices it does.
The reason devices like this exist
https://www.schiit.com/products/eitr

Is because some DAC’s have such terrible USB implementations that they work better through SPDIF, and you need something external to get optimal sound out of USB.
But generally the Schiit products are pretty good.

Depends on your use case. If connecting to a PC, you always run the risk of USB noise, in which case Optical would be a better choice. You also are limited to 24 bit 192 on Optical.

When a DAC takes noise from the power rail in USB, it is shit. Simple as that. Those 6.08€ (litterally) worth of components to clean up noise on a 5V rail are not too much to ask for on a >80€ DAC

Noise on the Datarails will be ignored due to how USB error correction works.

My understanding with the issue with USB vs SPDIF, is that it’s noise from the USB decoder.
I don’t know when people discuss noise like this if it’s actual RF Noise from the decoder chip, or if it’s the inability of the off the shelf decoders to accurately clock the output the samples to the DAC.
There is an interesting note in one of the Schiit user manuals about using a none audio USB cable, because some of the audio specific ones don’t support USB2. Which is pretty scary.

Either way some DAC’s do perform measurably better of specific inputs.

I agree with you mostly, but it’s not always the case. Noise can be for many different reasons not related to the DAC such as ground loop, damaged cables, etc.

If it was really clock jitter, someone gimped on having an external crystal (which all semi-conductor manufacturer recommends for timeing sensitive applications).

Just like Schiit has it:
(arrow marks the quartz-oscillator/clock source) 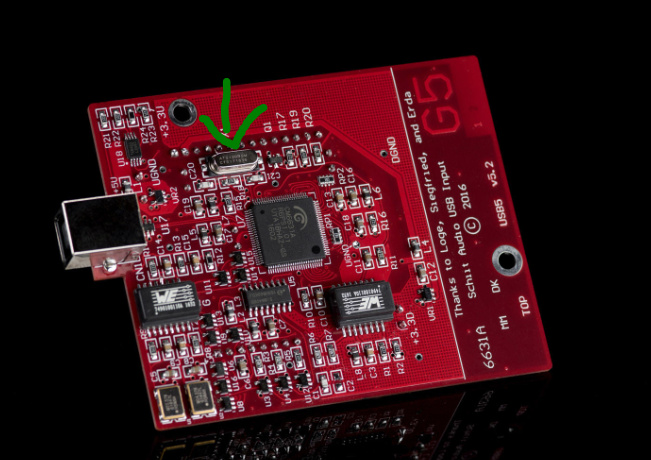 Either way some DAC’s do perform measurably better of specific inputs.

Would be interesting to open up a bunch of DACs where Toslink vs USB makes a difference and take an oscilloscope to them.

Different ground potential is indeed a problem for USB anything. Then again, why not put a GND-screw on the device?

Majority of ground issues related to PC are from people plugging the PC and other devices into separate surge protectors or outlets introducing multiple grounds. I can’t tell you how many times I’ve corrected that for friends and family.

Would be interesting to open up a bunch of DACs where Toslink vs USB makes a difference and take an oscilloscope to them.

I’d be interested in where the noise is coming from.
But it’s interesting how much work Schiit has put into it’s USB solutions, with the new Bifrost-2 having an in house designed USB solution using a PIC uController rather than an off the shelf solution.
I know their big selling points for Gen 5 was isolation, both electrostatic and electro magnetic, so maybe it’s just as simple as additional ground noise and EMF from the decoding solution.