Using speaker amp for your cans?

Was planning on getting a GSX-mini but now I’m considering a speaker amp. Not because of hard to drive cans but just for the hell of it. Curious if/what anyone is using. I’m vacillating between something cheapish like Aegir and something more expensive like a Pass.

you can, but they’re usually an afterthought to the design and poorly implemented.

I don’t mean using a headphone jack on an integrated. I mean running directly off speaker taps with a resistance network.

I remember Zeos showing one of those quite a while ago, it converts speaker amp outputs to a headphone output but I don’t really see the point, besides just cause.

I don’t really see the point, besides just cause

I have multiple speaker and headphone amps that I rotate. What I don’t have is a smallish class A speaker amp and figured it makes sense to use on cans as well instead of spending even more money by buying yet another hp amp.

Generally I personally wouldn’t pick up a sub 1k speaker amp for headphones unless you had to, I think once you start getting into the 2k used range (perhaps like a first watt or something) there are worthwhile speaker amps for headphones, but even then depending on the headphone I might just rather have a headphone amp of the same cost

If you have a he6 or something I might prioritize a speaker amp (or a susvara or raal sr1a for that matter) but otherwise it might not make sense and a headphone amp might serve you better. You also have to decide if you want to grab something like a black box speaker amp adapter from ampsandsound or go directly from taps to headphone, with the ladder giving a slight edge in sq but at the cost of potentially killing some things if it fails

I’d say get a Pass Amp Camp kit and enjoy it coming and going while getting pretty damned good sound out of it. Updates September 10th 2020 Update All current production batches have now sold out. The next batch to be produced will be shipping January 2021, and is available for pre-ordering now. Please ensure you are familiar with how our pre-orders work....

They only make sense for a very small fraction of headphones.
Most people driving say Susvaras off a speaker amp aren’t doing it through the resistor box, they are relying on the amps ability to drive a 64 Ohm load directl, some amps won’t , and those that do will be Voltage limited, so a 100W speaker amp is about 12.5W into a 64 Ohm load.
Still lots, but not much more than higher end Headphone amps.
That’s actually worse with a resistor box, since most of the power has to be converted to heat.

The PSU’s are probably better in decent speaker amps, and that might make a difference for very hard to drive loads like the HE6 or Susvara.

Your basically talking about taking an amp designed to drive 8 Ohms or less and making it drive load well outside that (or converting all that extra power to heat).

Personally I’d use a headphone amp unless you have a specific difficult to drive headphone like a Susvara where a speaker amp might make sense.

Been thinking about the ACA for over a year. But I always end up with the conclusion that if I were to buy 2 ACA, I might as well just get an Aegir.

Yes that’s the problem, generally only the higher end speaker amps are high quality enough to drive a headphone load without issues like the amp crapping itself, and also having high quality enough power to satisfy, since hooking a headphone up to a speaker amp will kinda show more flaws of the speaker amp that wouldn’t be as apparent driving speaker amps, so the bar for quality will end up being higher. At some point when you go past the 10k mark for speaker amps, mostly all of them will end up driving headphones really well, but for the mass majority of headphones you could have spent 5k on a headphone amp and gotten similar if not slightly better sound quality

Honestly I would only peruse driving headphones with a speaker amp if you have the aforementioned headphones that actually need it or could benefit from it, or if you were already really big into 2 channel and had high end enough amps where it would just make more financial sense to take advantage of what you already have (but if you wanted to fully transition to headphones it could still make more sense just buying a headphone amp)

Also to clarify on the susvara point, imo given the headphone amp is actually up to the task, I like the susvara off speaker and headphone amps about equally, if you have 2k to spend a speaker amp is going to be a clear winner but once you get to the 5k mark you can get some nice headphone amps that can drive them just as well as if not better than some speaker amps. Although strangely with the he6 I’ve always favored speaker amps regardless, but that’s most likely because I want the most possible slam and impact out of them, whereas with the susvara that’s not really the main focus (and the susvara is much more sensitive to amp quality along with it’s power hungry nature). For the raal though you really don’t have much choice outside of a select few specialist amps lol (will say though that the hsa-1b is pretty excellent and the jot r outperforms most sub 1k speaker amps for the raal so even then the idea of using a speaker amp isn’t fully advisable but again it all depends)

Speaker Amps are for Speakers.
On a lot of them, the headphone out is an afterthought. Just to tick that one of the feature list.

The Speaker binding posts are also not a good option, for two reasons:

If you absolutely have to tinker arround behind your amp, this is for a speaker amp that can deal with 8 Ohm load:
It is crucial the resistors can handle the power. For a 50W per channel amp, this works (2x 25W = 50W) spreading the power dissipation. The resistors would get pretty toasty over time though. 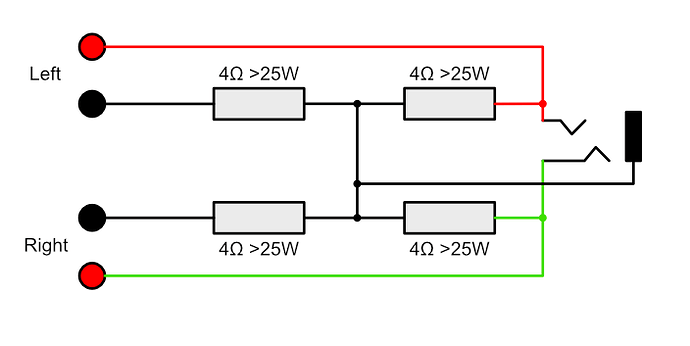 Never planned on using a hp out on an amp. Also all my cans are using balanced cables so the ground is not an issue. And, building the proper resistor network is easy-peasy.

However, I appreciate your thoughts

I am currently using a speaker amp for my HEKv2, but as M0N mentioned, I am constantly double and triple checking my connections before I turn on my amp. I am personally using the ampsandsound black box as well. It wasn’t cheap, but it gives me another layer of protection and I just use my normal headphone cable.

Using Decware 341.5 with ZMF and Sennheiser cans. Works excellent in my set-up and most importantly no hiss or noise. Since the amp spends most of her time powering speakers this is only a set-up i do out of boredom. If i only had these headphones i would make a more permanent solution of this But that’s not the case so i don’t need to bother. This particular amp though can be had w/ a HP output if you wanted so it has always been a good match. YMMV, happy listening.

I say just get the Emotiva BasX A-100. You can put in jumpers that give you the power of the speaker amp directly to your cans if you need it.

The Emotiva is fun and has a fairly pleasurable Warm sound signature but the hiss and fuzz WILL remind you of 50’s HiFi more than anything else, at least that is the way I experience it…

It’s not about the power. It’s about dual purposing a speaker amp and saving money in the process. Not a big fan of Emotiva (no particular reason, no bad experience with their products).

Basically this would be a small class A solid state amp that I would use from time to time on my main rig (its intended purpose) but will likely sit idle a lot of the time so I figure it can do SS amp duty on my cans.

Come on…you know you want one…

LOL, i’m curious to see what you finally pick and go with…I like class A and almost decided to try my hand at building the little pass labs thing…Now i’m looking at the big pass labs amps…lol…

seriously i need a different hobby.

First watt f8 or j2 are very reasonable (around 2k ish used at this point for the j2, f8 is too new to tell) for driving headphones imo, and would fit your role nicely @A_Jedi. Also you know you want one lol