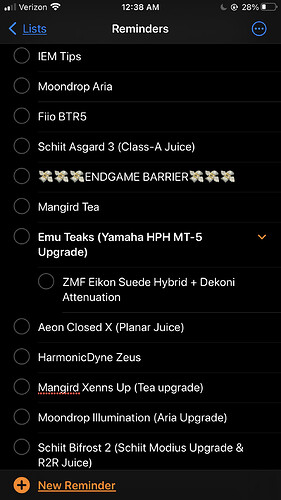 In order to NOT feel distracted in this expensive rabbit hole, I made myself a wishlist of all the things I want to buy in the future.

So far, this has become a very powerful motivator for me, because if I do well in a semester for college, I would like to reward myself with a new IEM. If it’s my birthday then I’ll perhaps indulge myself with new HiFi gear.

The endgame tier, however, serves as a barrier to prevent major impulse-buying (thank you adhd). In other words, this is where I can daydream all I want, but my money is better spent more practically. Like my dog, or perhaps some investments.

the best laid plans of mice and men…LoLoLoL!

as new products come out, or opportunities to get expensive gear for a great price on the used market, you will soon find yourself deviating from any plan and the logic behind them, LoLoLoL!!!

that said…right now, I really want a good R2R DAC, a good OTL tube amp and the Senn HD600’s. at least, that is the more realistic list of what I’d like to have. I have heard totl gear and it corrupted me. I want the Focal Stellia and the HFM HE1000se…they are simply PHENOMENAL! buuut…I can’t even afford a $100 DAC / Amp right now, so no chance I’m getting $3K headphones let alone a stack of the quality they are due. LoLoL!!!

My wish list is all over the place, lol.

It probably starts with a new SS amp to move up from the Jot2. Something like a GSX-Mini or XI Audio Broadway. Now before last week, after the amp upgrade, I probably would have said that the next thing on my list would have either been a nice planar like the Arya, or a ZMF headphone (not a planar, to avoid someone pointing it out). But I’ve now been bitten by the IEM bug, so now I’m torn on whether I still want to go that route, or go exploring IEM next. Because there are several of those I really want to try. The Starfield, the Monarch & Clairvoyance, the Mest MKII, the Variations. And those are just the ones I want to try the most.

Moving on though, after I satiate my curiosity with the various headphones and IEM’s I want to try, a DAC upgrade would likely be next on my wish-list. No idea what it would be. Would probably rely on advice from the community here. Now, ideally, and since this is a wish-list this is where it’s going, after the DAC would be the Focal Utopia. That is the headphone I currently more than any other, outside of possibly the HE-1. But the only way that’s happening is if I win the lottery.

It’s at this point that things start to blur a bit. Tube amps, more headphones, more IEMs, possibly continue moving further up the price ladder DAC wise…who knows. But is any of this going to be happening soon? Not right now, no. I’m hoping to get the new amp sorted by the end of the year, but we’ll have to see how that goes.