What do you do about Zoom/Discord/Work calls?

People with setups involving your computer. You’ve got a fantastic setup for listening to music, movies, games, professional recordings; do you change anything between that and when you know you’ll be listening to your coworkers through their laptops for meetings?

What do you do to flatter voices and cut out rooms on poor recordings?

I have a tube just for that. Vali 2+ is wonderful for that.

Anything voice related (Discord, Teams, WebEx, etc.) goes through onboard audio into my mixer (set to 75Hz Low cut, 15dB cut at <80Hz and >12kHz).
In the mixer it also joins with music, game sound, etc.

Microphone wise, I use a Superlux S241 feeding into my Maya 44eX (soundcard with phantom power FTW!) held on a dirt-cheap table-clamp mic arm.

I don’t mix my gear with work related stuff.
They separate things in my mind. Plantronics headset for work.

I have a separate computer for work from my regular listening setup.

On my work machine I have a Blue Yeti for the microphone. Audio is being put through a Schiit Modi 2 Uber and Lehmann Audio Rhinelander. These are older components that I have upgraded from in my main machine. Usually I pick a pair of headphones that are comfortable and ok for long listening periods for calls.

I just make sure of two things:

I personally don’t feel like I need maximum fidelity for online meetings, so I just use my Arctis Steelseries 7 wireless gaming which I bought some time before I went full audiophile. It’s wireless so I have the option to pace around the room or stretch during long meetings. And the audio is clear enough while my mic is good enough for people to hear me loud and clear. Plus there are several neat features like a mute button on the headset so I can mute at a moment’s notice if I need to.

I also keep work separate from Hi-Fi. I bought AirPods since I always join meetings on a Mac. Unfortunately, I think this was a mistake, because they don’t “just work” as one would expect from Apple: I frequently have to select them manually and occasionally have to entirely re-pair them.

I think I’d get a cheap bluetooth mono headset if I had to decide again.

I’m working from home so I use the same rig:

Laptop microphone boosted to max in windows seems to be enough and people say they hear me just fine. I don’t keep the laptop close to me, hence the boost.

To switch between work laptop and home PC I have the following:

For headphones I just plug them into the Emotiva A-100 for calls where I need to also talk, the big jack can take the constant abuse. It’s also a bit far from me, so I keep it at about 50% volume and control volume from the dedicated button on the keyboard (steelseries apex 3)

Until I find a single unit with a HP amp, that can handle multiple inputs and switch between speakers and headphone without touching the cables, I don’t have much of a choice without complicating it even more.

Also for some reason Windows doesn’t want to use the microphone in the BTR3, not sure if Fiio didn’t do their job properly, or just windows being windows.

I am on my headphones / mic all day. If it’s not a work call, I have music or something else playing.

My input is a Shure SM58 plugged into a Cathedral Pipes Durham MkII plugged into an Audient iD14. This was extra I had from doing some voice recordings.

My output is a Topping D70 DAC to a RebelAmp to Beyerdynamic DT1990’s. I have a couple things input to the D70 so I can switch between meetings / calls and music. The Beyers are super comfy on my head and I can wear them all day with no problems.

I’ve been fully working from home for the last year, and I’ve gone back and forth on using my HiFi with my workflow (calls, video chat, etc). After getting blasted in the ears a few times by a MS Teams call coming through while listening to music, I’ve settled on keeping them separate. (yes, I could use exclusive mode, or various settings to control what can ring and when. but it just became another thing to manage, and quickly wasn’t any fun.)

For work I use a Jabra speaker phone while sitting at my desk, and a Jabra wireless headset when I need noise isolation (or want to roam around while on the call).

I don’t have a home computer in my home office (just the work laptop and a bunch of monitors). To keep my HiFi separate from work computer I use network streamers, and then play from Roon (controlled via phone, tablet, or laptop).

That said, I’ve been tempted to put a mod mic on my HD6xx’s and use that for calls…

After comparing a bunch of different options for video calls, including the Jabra Evolve 2 75, Apple airpods max, Bose, Sony, etc. my very favorite video calling headset is actually the Koss Porta Pro Headset with boom mic… It has by far the best sound, much better than any bluetooth option, best mic (mic has a very clear deep rich bassy sound and is super easy to adjust), and in my opinion its the best looking headset I have seen, super lightweight and simple and clean professional look (not huge on the head).

The Jabra is runner up, sound and mic is not as good as the Porta Pro, but its nice to be able to walk around and it mutes when you turn up the mic, and its a sound isolating mic… But the porta pro headset mic sounds way superior imho. Comparing the mic on the Jabra to the porta pro, the Jabra despite being great for sound isolation sounds more electronic and hollow to me.

That comparison was just with it plugged directly into my laptop, but I have ordered a Schiit Hel, I like that the amp has a mic gain knob, going to use the Porta Pro for gaming and music as well while at my desk, and I figure I can also sometimes use other hard to drive cans if I dont need the mic. Nothing fancy here to be honest, to this day I am still using my Audio-Technica ATR-2500 USB Mic, old as hell, worn and beaten but it still works, though I think a change is need once it hits the bucket. Its blue LED indicator can be annoying to my eyes and more annoying that you cannot turn it off. When it comes to not picking up sound in my room while using the mic, I tried NVIDIA Broadcast, it works sure but it’s not as impressive as they showcase it in their videos, or perhaps I am doing something wrong on why the sounds of mine are more or less average than spectacular as some other users of it claimed.

Overall though it works fine during Discord calls, though I wish it could have been better. Just my trusty ifi Zen DAC and that mic gets the job done for me, but I think a better audio interface and a mic will make things better for I am still a novice when it comes to involving mics and stuff.

Not too fancy either. I have a main computer with my typical setup to listen to music/audiobooks and videos, with my amp/dac and headphones. I’m an artist, so I use this computer for work on Photoshop and CS Paint as well. Then I have a laptop for its camera/mic (late 2015 macbook) for meetings.

Neat little trick:
I connect a 3.5mm male to male 10ft cord from the macbook’s jack over to my main computer’s Line In (blue port). This enables me to listen simultaneously to both without having to switch plugs when I attend meetings. Works when plugging in my switch, PS4, or phone as well. Though you have to enable “listen to device” in Sound Recording settings.

I don’t mix my gear with work related stuff.
They separate things in my mind. Plantronics headset for work.

Still no mixing work and pleasure gear.
But the update is that Plantronics are casual home use headset for calls
Sennheiser EPOS 660 are work phones now. Also pretty decent for music use if office noise is too much.

What are some of the options for taming the incoming sounds from work calls and stuff?
Like removing harsh notes and stuff. I am using PipeWire and EasyEffects if it helps 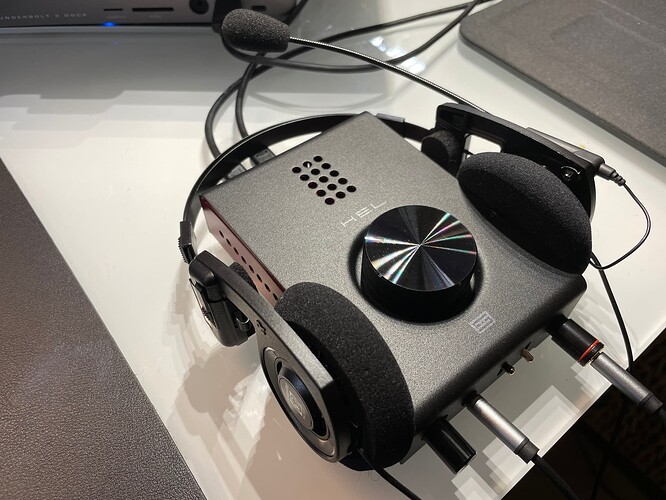 image1920×1440 263 KB
Finally received the Schiit Hel, works great with the porta pro headset, sound on mic and audio are amazing, you have alot of power for harder to drive cans as well, and I really like the two knobs for controlling mic gain and audio volume… Can confirm that if you turn gain on mic all the way down it mutes it
2 Likes