What happened to McIntosh headphones

A few years ago McIntosh dipped a toe into the waters of headphone manufacture with a very expensive model (MHP 1000) which would probably have been great if sold for a fifth of the price but at the SRP seemed to be way North of what they were worth. Given the provenance of McIntosh it was a rather odd move, and now it is almost like the headphones never existed as they’re seldom discussed, rarely seem to be available to buy and given they came from such a distinguished manufacturer (the Rolex of audio, a high end brand normal people outside of audio might have heard of) it seemed a dismal failure. Does anyone know what happened to them? I’ve read rumours that they were a variation of Beyerdynamic (the styling was certainly very Beyerdynamic like), have they any plans to have another go?

Admittedly McIntosh has kinda transitioned into a lifestyle brand with their newer stuff, and it’s not really the best for money nor the highest preforming out there. The headphones were largely mediocre when I heard them, really not worth imo. I don’t know if they would actually have another pair that would be competitive, if they did have another go I would assume it would just be another rebrand

McIntosh do seem to sell on image, but in fairness I think most luxury brands rely on image and an appeal to what their name means to people than objective quality. Very stylish though, although I think their current gear isn’t like the McIntosh of old it still has a certain style and looks gorgeous. I never heard their headphone sadly but reading reviews it struck me that it would probably have been a good, competitive design at $500 (which is still hardly cheap) but $2K+ was crazy (even with the McIntosh name as a selling point).

If they were $500 they would be the cheapest thing McIntosh sells.
Most of their modern stuff is still pretty good, it’s just very overpriced, your very much paying for the Brand recognition.

My brother in law owns a McIntosh sound system. It cost him around $8,000 but he’s rich. When I heard how good it sounded in person, I then asked him for the price and was flabbergasted.

I mean, you can buy something for half the price or even less that still sounds just as good. One of my best friends has a sound system using mostly NAD and Martin Logan parts and it sounds better, IMO.

When I heard how good it sounded in person, I then asked him for the price and was flabbergasted.

Yeah they aren’t leaders in price to performance lol

Yes they were never that, even in the 90’s when they made really good stuff.

In fairness you hit a point of diminishing returns in audio as with most things, and in many cases that point isn’t that high. High end audio performance is often divorced from price.

In my younger days I dabbled in boutique audio gear and read magazines avidly until one day I started questioning why even entry level Sony, Pioneer etc gear had much better fit and finish, then I also started looking at the internal build which was quite eye opening. Since then I have been somewhat sceptical.

Here is a story about my father (63 going on 64). He was big into audio in the 70s. He was buying, using and when tired of them, selling audio equipment like ESS EMT1A, etc. Not sure about everything but hear me out. He worked up his money to buy the best of the best at the time. A Pioneer SX-1250. Big honking 65 LB 160 watt per channel beast in 1976. When it first came out, $950 with tax. HMM, that about $4326.71 now. Paying that much on an amp now is about right for a really good quality amp. He had the amp for a while and then he went to a friends house (electro/mechanical engineer) lets call him Tom. He had something called a Heathkit AA-1515. Only 70 watts per channel, but man it sounded soo much better then the Pioneer. Better dynamics, imaging, etc. So he wondered how much it cost. First Tom said it was a kit he put together. My father couldn’t believe that. Then Tom said that is cost $300 (still about $1,366 now). He was astonished. He asked Tom if he buys all the parts would he build it? He said yes with no labor cost (Shows how people were back then to now). About a month later he had a Heathkit AA-1515 connected in his house and was blasting away with his ESS EMT1a speakers. He never found another amp that sounded like it. Comparing it to McIntosh, Audio Research, etc. Now 44 years later his son (ME) has the Heathkit that is still working perfectly as his main amp. Shows you that dollars don’t mean everything, quality components with the right implementation might be cheaper then something pretty and has a big name. Now I bought another heathkit, the AA-1640 which was built around the same time period. Speaking of lots of power, this one has 200 watts per channel and sounds just as good as the AA-1515. Cost about $489 when it was built. (Would cost $2227.11 now). Sounds expensive to me… But got it for a good price. Love that thing, silent, great sounding, and weights about 60 lbs. Lesson in big company’s vs smaller company’s with more passion than filling their pockets with lots of money.
PS…
Here are the brochures for both of them. (Same year)! 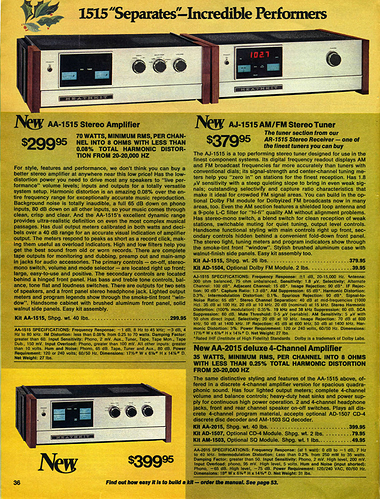 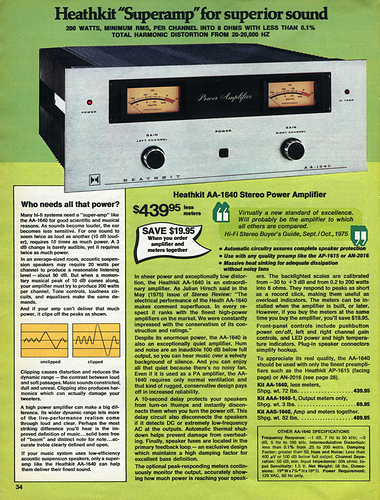 Those headphones were definitely rebranded Beyers.