Ive been on the hunt for a pair for a few months now, preferably second hand now the Drop price has gone back up to $450 when you include import taxes too the UK etc. Were there relatively few released in the first couple of waves or are they that good most people are hanging on to them ?

Im kind of trying to work out if I need to just accept its going to be $570 to import new or I should be looking at other closed backs for around the $300-$400 mark. I am disabled so I spend maybe 90% of my day at my desk listening to music or playing games. I recently purchased a THX 789 amp so I ‘should’ be able to drive most things.

Any help or advice would be hugely helpful!

because Drop failed in their attempt to break into the EU. they had EU specific options, but it didn’t gain the traction needed to sustain itself.

it seems to be an issue for NA companies. a lot of EU members on here lament the shoddy service Schiit offers as well.

your best bet is to get a friend in NA to buy them n send them over as a gift. just arrange to reimburse them before shipping…

Im kind of trying to work out if I need to just accept its going to be $570 to import new or I should be looking at other closed backs for around the $300-$400 mark.

because Drop failed in their attempt to break into the EU. they had EU specific options, but it didn’t gain the traction needed to sustain itself.

it seems to be an issue for NA companies.

Getting from a market you know to a vastly different market is much more difficult.
The “easiest” (but still difficult) options are to find a retailer to stock their products (and there are many to choose from here).

1770 had quite an issue with sibilance, driver rattling, among some other supposed issues. 177x is the refined version and fixed everything. Can confirm that the only real issues I had when I was trying the 1770 was just my right side driver had some rattle and it was pretty sibilant after switching to the 177x it sounds a hell of a lot better to my ears. Though, could have been a bad copy of the 1770s

177x is the refined version and fixed everything.

Thats kind of the impression I got from reviews and browsing forums. Returning items can be a little tricky with my disability which is why I am reluctant to try the 1770 Pro with some of its weak points, especially when the 177x exists.

I mean, heres some comparison. 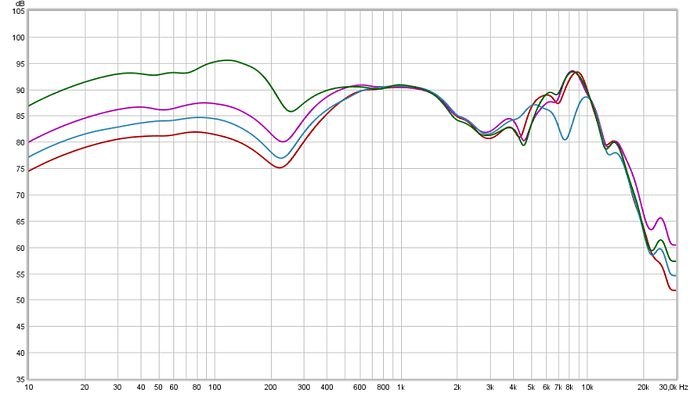 thats a graph of the 1770s frequency response using different pads Green is the 1770 velours, Purple is the DT 1990 Balanced pads, Blue is Dekoni Elite Velours, Red is DT 1990 analytical. Adding the pleathers extends the bass more and lowers the treble

I think those graphs confirm what, in my head, the differences would be with the major difference being the peaks in treble on the 1770 pro. Does make me a little nervous.

Are there any other highly recommended closed back headphones around that price point to keep an eye out for? Like I said, the use would be primarily music and games. Maybe the odd TV show/film thrown in so fairly ‘General Use’.

Does make me a little nervous

To be fair I did really like the sound it just was a bit sibilant though I never tried a proper pad swap like the dekonis to sort out the treble I could have also bought a cable filter which definitely would have sorted that one out. I do think it sounds great it’s just one of those that isn’t for everyone and beyer isn’t very well known for huge quality control issues like Hifiman is.

So an all rounder in the $500 range then? Depends on the type of sound signature you want. Do you by chance know what sound you prefer? Like stated 1770 is a brighter headphone it’s more of a U or V shape type of headphone depending on your pad choice.

Well I use the 58x’s right now and, although I do like their level of detail, I do find myself wishing they had a little more oomph in the low end. The soundstage is great as well but as far as I understand it I am unlikely to get a sound stage as wide due to the nature of closed backs ?

as wide due to the nature of closed backs ?

Not necessarily as the 58x has a pretty small soundstage in comparison to quite a few other headphones. I would say since you like the 58x jubilee maybe try the HD 558s these have more in the low end frequency. However, since you want a closed back it will depend on what type of sound signature you want. It’s hard to make a suggestion when someone only wants detail and a bit more low end considering that the 58x is relatively a pretty balanced sounding headphone, as is the sennheiser brand. Since it’s for gaming and you want low end though maybe try the MMX 300s from beyerdynamic… good bass well rounded sound and comes with a nice quality mic for your gaming.

Edit: is there a reason you really need a closed back? Just isolation? You can get quite a bit of low end on open backs and they tend to have a more airy wider soundstage to them.

There are some pretty wide sounding…Elegia is very open sounding with a good stage. Dan Clark also does closed very well. It doesn’t take much to get a bigger stage than the 58x, tbh.

Yeah but I am pretty sure those are unfortunately outside of budget in this case. Sounding like a more $500 or under range for the budget here. Though I will agree that Dan Clark’s aeons are gorgeous sounding I love mine to death I don’t think I will ever part with it and still working on an audition for the elegia. For aeons though I don’t find them very great for competitive gaming, for casual gaming and listening though they are great.

Well…Aeon closed RT is $499 and Elegia has recently been $429, so thought they’d be close enough

It doesn’t take much to get a bigger stage than the 58x, tbh.

Thats really good to know, obviously I was speaking from my relative lack of experience with headphones in general. The only other closed backs I have tried for a reasonable amount of time were the Beyerdynamic 770 80ohm and I found them really lacking.

I found them really lacking.

Mind if I ask how you found them lacking?

Well…Aeon closed RT is $499 and Elegia has recently been $429, so thought they’d be close enough

Are those new or second hand prices ?

Mind if I ask how you found them lacking?

I found the low end to be a bit muddy and overpowering and even though the treble sounded ok it also sounded like it lacked detail for me? Mids also seemed very recessed even for a U shape signiture headphone. Again this is all from my limited experience so forgive me if im not using the right terms!

Those are new prices

You explaination is just fine no worries. That’s rather interesting. So you don’t particularly like recessed mids which is fine. 177x and the 1770 aren’t as recessed and have a better bass with more detail to them so your definitely looking at a good headphone I can go ahead and confirm that for you. If it is possible for you to somehow audition the 1770 I would start there whether by an audio store or just find a good return policy this will give you a very generally close idea as to what the 177x sounds like and you can decide yourself if this is worth the money. Aeon Closed are gorgeous headphones very luxury build quality with thick extremely soft sheepskin pads. Due to the Retune it really brought out a lot of good qualities in this headphone and now since that retune is a good purchase, since originally it didn’t sound all that great. Aeons are generally a small V signature, though in closed the bass is much more in the mix as they raised it in the rt version, and the treble has a roll off adding a very nice sound in my opinion alongside a pretty good wide sound to them. The biggest issue with that is some people state it lacks dynamics or that it sounds rather boring and that the bass has compression. I didn’t really find that in these headphones but I balanced mine during auditions to a liquid platinum and bifrost 2 which may have cleared up any issue or I had a special copy or my ears are defective lol. The elegia is supposedly fantastic, and the others can tell you more than I can on that one as I have yet to audition it. MMX300 I recommended since argons aren’t necessarily closed back, less you mod them or have the T40rp converted, and they aren’t easily obtainable since they take so long to get. MMX300 are an actual gamers headset from beyerdynamic that really doesn’t sound like one. They sound close to the argons wide and bassy which may suit your preferences for a well rounded use just fine. If your a bass lover you can always go with an Emu Teak which is a bit of a V signature or one of the discontinued MASSDROP X FOSTEX TR-X00 models, purple heart, mahogany, ebony, provided you can get your hands on them.