I recently purchased an ifi zen dac v2 in combination with the hifiman he400se.

I’ve always used gaming headsets prior, so I wanted to invest in a decent audio setup

however upon plugging it all in, it’s very underwhelming, not just that, i’m also having volume and clipping issues.

I initially thought the HE400SE had a defect, so I returned it and got a new pair, same issues. Then I thought the zen dac was defective, so I returned that and purchased a new, this time i got a hifiman sundara along with it in hopes of it being better

I am having the exact same issue again.

Im using the maximum volume possible. and it’s very quiet to me. It’s like having 50% volume while having it directly plugged into your pc, the audio quality is also not amazing me, i suppose it’s because the volume is so low

i’ve tried:
reinstalling windows
reinstalling ifi usb driver multiple times
different usb a to b cables
flashing newest firmware
tried every port on the back of my msi mag z390 motherboard (and reinstalled the usb driver after doing this)
multiple 6.3 to 3.5mm converters included with the zen dac and headphones
trying it on a mac book, windows laptop, 2 different desktop pc’s
disabling my onboard audio in bios
disabling every other audio source on my pc apart from the zen dac

when i turn on powermatch on the dac, it’s still quiet, not only that, any type of bass and the sound goes insanely distorted
i experience clipping aswell with powermatch off at max volume on the dac, but it’s not as bad as with powermatch on. for example i was watching a twitch stream and the ingame voice lines were distorted, along with gunshots

from what i’ve seen, this combination should run fine and it should also be plenty loud at around 60%

has anyone experienced this before or know any possible solutions? ive been down the rabbithole for almost 2 weeks trying to figure this out and i ran out of ideas. i doubt the zen dac or sundaras are faulty, i’ve had 2 units of the zen dac, and 3 seperate hifiman headphones

Fairly low sensitivity planars tend to draw a lot of current and I’m guessing that’s what you’re running into. I’d say get a beefier amp. Asgard 3 or SMSL SH-9 are a couple that’ll run 95% of planars pretty well, Asgard for a little warmth, SH-9 for neutral.

Hi, welcome to the forum, sorry you are having some issues.

A question I have is are you using an external PSU with the Zen Dac or getting power from the USB. I remember with mine I used a pretty inexpensive unit from ifi to keep the USB pure data and provide distinct power, and typically more reliable/consistent than depending on the USB power

Also, have you tried from another USB source, not just another port on your PC but like from laptop or another PC etc. PC’s are notoriously noisy electrically some worse than others and you may be picking up something from the PC you are using. Would not hurt to check that out.

The HE400se is 25 Ohm with 91 dB sensitivity not Susvara hard to drive but not what I’d call easy. So that too is also something to consider - you may just need an amp that provide more current.

Just some things to try if you haven’t, good luck!

Schiit is very hard to get in EU, also, other people seem to drive the sundara with the zen dac just fine except for me.

I’m getting power directly from the USB, I’ve used every port on my motherboard, I’ve tried a different desktop PC, and 2 laptops. Nothing seems to work.

I’ve tried numerous USB cables which doesn’t make a difference, also used numerous headphone cables since I had 3 of them at one point.

That is probably where the distortion stems from.

it’s very quiet to me. It’s like having 50% volume while having it directly plugged into your pc

One thing to check:
Rightclick the speaker icon in windows, there select sounds. 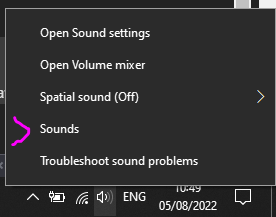 Select the playback-tab, there rightclick the ifi and select properties. Under levels → Balance, make sure both sliders are at 100% 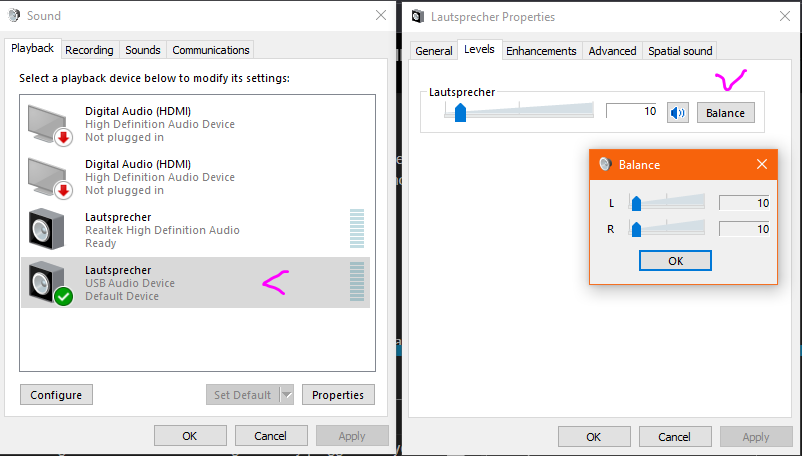 Also check under Enhancement (if available) the box to disable all fuckeries is checked, and set spatial sound to off as well. 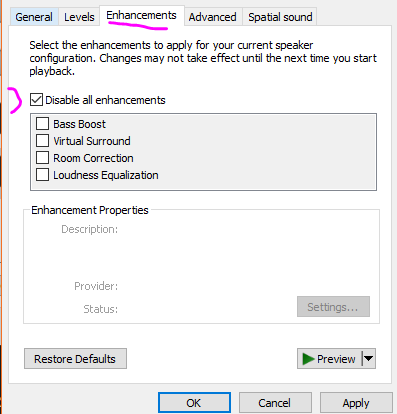 Thanks for the suggestion, however this was already set correctly, I got a zen can today to pair with the zen dac and it works well now. seems like the zen dac v2 cannot power the sundara properly atleast in my case somehow.