So, in a effort to learn something and maybe look at my next gear purchase, I have been kicking around a question in my head for a bit. Is Amp/DAC pairing a thing? Cause I have heard the DAC does not matter that much. To a point obviously. There is a huge difference between say a JDS Labs El DAC II and a Denafrips Terminator. But should one worry about pairing an amp with a DAC?

Example: I like the Topping a90. Might get one one day. it’s a great amp. But I like the Lake People G111 as well. What are the big differences in the two? I have no clue what I am looking at in specs. What DAC would go good with either of those? Does it matter?

Help and opinions most appreciated.

FWIW I was looking for a Soekris DAC to pair with my Lake People G109 Amp because one of the regular posters with lots of experience said that the Lake People/Violectric and Soekris pair very well together/ make excellent synergy.

I couldn’t get my hands on a Soekris so I can’t really say from experience (and even then it would be a very limited experience anyway) but in answer to your question it would appear that the pairing does matter to an extent.

Just a heads up, Soekris will be releasing their new updated DAC lineup within the next 2 months, according to a very trustworthy source. The remaining Soekris inventory will probably be very hard to come by.

@Kierkegaard Soekris looks like a good Ladder DAC but it’s a bit out of my price range. Do you think there is one sub $500 that would pair well with the Lake People G111?

I can only speak from my experience of course. I’ve listened to my Lake People G109 with both the ifi Zen dac ($129) and an Audio-gd R2R11 ($349) - both of which I found really enjoyable. I mainly listen to classical music but I also like folk, bluegrass and stuff. So lots of strings and lots of guitar plucking and lots of choral.

The zen is smooth and sounds good with everything, to me, but, I feel, doesn’t have the punch and edginess of the Audio-gd. The audio gd is much more powerful and I find that everything is more detailed and wider, bigger, sharper. I enjoy it more than the zen and I’m thinking of buying it. It’s been reviewed favorably by some (Zeos, DMS, and some others although I don’t recall them) and negatively by others. Take a look at the R2R thread. I don’t have the experience of most on this forum and the ones who’ve not been too favorable to the Audio gd are people according to whose judgment I’ve bought or tried to buy stuff (The G109 and the Soekris, for example) that I’m very happy with. However, I’m willing to venture that the audio gd could be hit and miss due to quality control. I haven’t heard the lack of precision that others have heard with it and that can be due to me having lucked out with a good copy or my far more limited listening experience.

What I can say is that the Audio gd / Lake People pairing sounds really enjoyable to me on everything I listen to. Even solo piano music which I find is the hardest thing to represent realistically and without distortion for some reason.

It could also be the case that the Lake People sound smooths out or refines any rough edges the Audio GD might have.

So just in case it wasn’t clear, the ifi zen isn’t a ladder dac but I mention it in order to transmit what I can in terms of the difference I felt between listening to my G109 with it and with the Audio GD R2R.

I would suggest trying the Audio GD out and returning it if not satisfied. What could you lose. If anything you gain more perspective to judge other R2R/Ladder DACS.

If you must have a fun DAC/amp on the go that just works or works surprisingly well for the pairing, Dragonfly Red or Cobalt. $200 or $300 and it drives the majority of single ended headphones in the $500 range without issue.

I personally have to say my Bifrost 2 and Modius literally work damn near all the time on everything for USB (abuse on linux QUITE often). Bifrost 2 literally is my all around is either good or excellent at everything I throw at it (after it warms up for an hour) and even plays nice (enough) with the THX 887 I own. If you get an amp that focuses on measurements, I got a sneaking suspicion you want to avoid ladder DACs (e.g. THX 887 works best with my modius).

My only note would be one pairing that did not work for me: SMSL SU-8 and SMSL SP200. I did NOT like that combo with any bright or bright leaning headphones. However, I have used the SU-8 with several other amps and had no problems at all.

I hope they update the look a little bit. They come across very server rack equipmenty

The look doesnt really bother me, but I like an understated look. The white case top is something that I don’t care for, but I can deal. It does stack well with the G111. 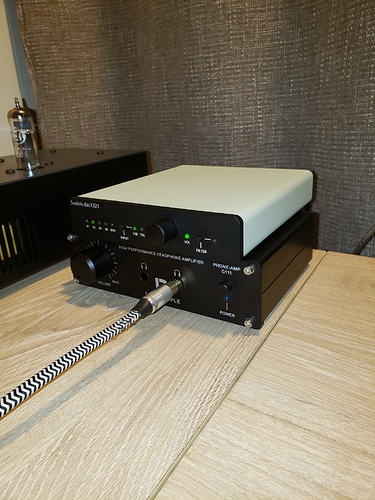 I think its the white sides and green lights that look like they would be better in a telecomm rack. No comment on their sound as im sure its great but i can see that and the LP racked up

I hate the color red, so the fact there is no red anywhere is enough for me to be happy, lol.

but I agree Haz…red paint is bleh.

ah. well, things will change shortly…but my office is in my bedroom. blue LED’s light everything up badly. I really dislike the blue LED’s on my ENOG2 Pro

I know personally, DACs for me HAVE to be under the amp. The amp needs space above it for cooling purposes.

It depends…what is your current DAC and is it an enjoyable enough listening experience? If so, then logically I’d say hold off. But if the dac is a sore point of your experience, then maybe consider looking at some solid alternatives.

My G111 hasn’t ever gotten warm to the touch, so it’s not an issue for me. If I was using something like a Schiit amp, then yes it would be an issue. The G111 is much wider than the 1321 too, so it would look goofy af stacked that way, lol.

I’m in no hurry since the past month i got the clear pro and g111. However DaC’s being used are smsl m100, topping NX4 and Hiby R5. Nothing excels obviously, but i can wait. When i purchased the g111 i had planned the soekris to wrap up my desk set up but i saw ur posts about new stuff so I holding off for now.

I have a Hiby R5 too and I like the dac considering it is a DAP. If you dont mind the wait, then I’d say hold off for now. My source said the Soekris 2541 should release in about 7 weeks, but could change due to the current covid19 situation. He couldn’t tell me if only the 2541 was releasing, or if it was releasing along with the other models, so that also should be considered. In the meantime, if you want an affordable dac that sounds better than the 3 you currently own, I’d suggest the Topping e30 as I think it is a steal for the price as it sounded great when I owned one, and is a very solid DAC performance wise.