Best Concerts You've Ever Been To?

Lots of talk is had about replicating sound and getting as close to a true ‘live’ experience as possible here. However, having not seen another thread on this stuff, I’m wicked interested by what concerts you all have been to and which ones were your favorites?

Best show?
Dropkick Murphys + Flogging Molly double header in Providence, Rhode Island. The amount of energy was insane. DM’s playing their cover of M.T.A. - Kingston Trio was fucking amazing. Might not be to everyone’s taste, but fuck it was great.

And for shits and giggles…

Which show do you wish you could’ve seen?
Bob Marley - Live at the Lyceum

I hope EDM counts because I REALLY enjoyed a show that Zomboy did in OK. Thought the floor was gonna collapse on the venue we were popping so much. Other notables were Manhattan Transfer and Blue Oyster Cult(had a kick ass Guitar solo where dude shredded-will never forget the passion)

Would have loved to see Pink Floyd and now Rush

Tom Petty & THB bar none was the best show for me.

The show was at the Blossom Music Center (20 miles south of Cleveland, Ohio) in 2003. It was a 6 hour show. Motorhead played about 45 minutes, Dio played for 2 hours…the rest was Iron Maiden.

I went to the show to mainly see Iron Maiden, but I went from a casual fan of Dio to putting him/them into my top 10 favorites. Ronnie James Dio had the best voice live that I have ever heard. Specifically, the song “Sacred Heart”.

Probably Coheed & Cambria for me.

Yep I saw them in 2013 @ SPAC… They played for 3 hours straight with great energy which was great for a group of 60 year olds. I assumed they supplemented with some substances to get up for that long.

the video does not capture the mood… german rap had a really unique vibe at that time
I have been to many concerts after that but none of them had such a special energy.
Ohmboy May 20, 2020, 4:58pm #8

Edit: Any of the times I saw Elton John as well.

Metallica, Children of Bodom… for now!

I definitely will go to jazz festivals when possible, too.

Oh fuck yeah thanks for the jazz poke

Hand on my heart never been that close to such an intense music experience…yeah maybe “cooler”?..more stoned ones but that was like whoa…Woosh.

Kamasi Washington, Vienna, 2018. HANDS DOWN. I left the venue literally thinking I’d just seen some of the best musicianship in the galaxy (and yes, I was thinking in galaxies, not worlds.)
What made it even better is that the band apparently told the sound guys to play some hardcore hip-hop before the set in order to loosen up the snobbish Viennese concert-house atmosphere

Everybody go listen at least to his song Truth

like many this is probably my favorite track by him https://youtu.be/LdyabrdFMC8

I would also add

I haven’t been to alot of really good concerts but do run into a lot of live music hard to remember my favorites but I think I had the most fun was in highschool at the local hipster cafe who had a little stage and a not so Great metal band my friends were in used to play just the atmosphere of random passerbys and regulars chilling to some kids yell and thrash their guitars was a great juxtaposition is super unique and oddly fun. Was gonna go to Osheaga this summer with this monster of a lineup sadly they got postponed 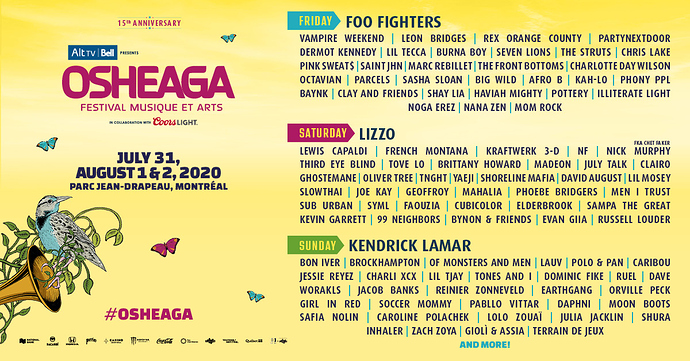 Annnnnnnd Kamasi Washington has been added to a good chunk of my playlists.

Goddamn this is smooth.