This is the official thread for the Beyerdynamic A20. This thread is for discussion and reviews. 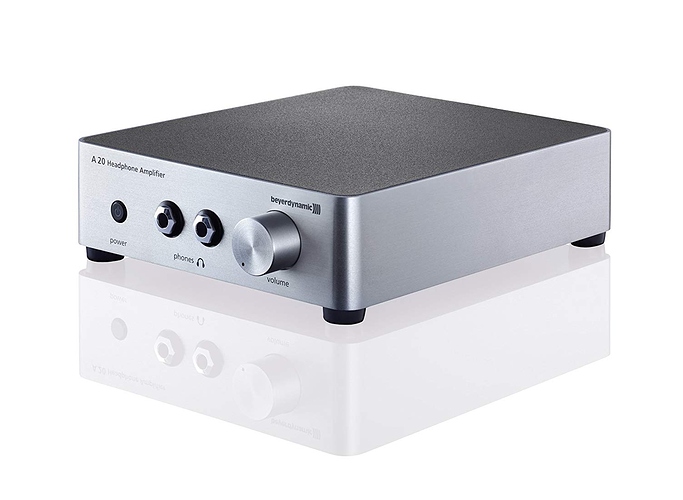 I don’t have much to add here, just irrational love of this amp. And this weirdness I had going in an effort to eliminate the electrical noise issue I was having. 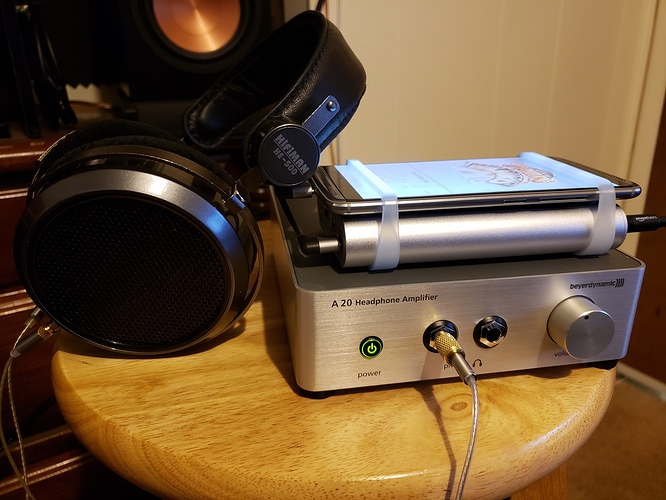 I never jumped on the 789 hype train, so I can’t really compare to it, but in its own right it’s not especially great.

The main DAC I used to feed it was my Marantz HD-DAC1, but I’ve also used a Schiit Modi 2, as well as a Sound Blaster X AE-5. This amp carried the same issue across all these: very loud electrical noise. I tried a number of things to eliminate it, including using different cables, power strips, power outlets, sources, etc, but I could never get it to disappear. I just assumed it was the amp and shelved it.

Out of nowhere I had the thought to test my Sony PHA-2A DAC/AMP, figuring having a battery-powered source might eliminate one more variable. To my amazement, the noise was completely eliminated. Even on very sensitive headphones like my Sony MDR-CD900STs I only got a little noise at maxed volume.

This issue is my main reservation in recommending this amp. I’m almost certain anybody else running this will have the same issue, and it makes no sense to recommend it when there are better spec’d, better sounding amps out there, for less.

That being said, there are some strengths to it as well. Build quality is phenomenal, it looks, in my opinion, very striking, the dual headphone-outs are neat, and the amp even attempts to volume match them when two different headphones are plugged in. There is a gargantuan amount of gain in this thing. I could pretty much blow out my ear drums even on my low-sensitivity headphones.

Actual sound quality is somewhat of a mixed bag. It’s very picky about the headphones you pair with it. I think maybe it comes down to refinement in the treble. It seems to be down in level somewhat, with maybe a little extra distortion. The overall sound actually kind of reminds me of an entry-level tube amp. If you can get something that really plays nice with this, though, it can sound very musical and lovely. For whatever reason, the Beyerdynamic DT770 Pro 80 really sings with this. It seems like a no-brainer that a Beyer headphone would sound great out of it, but it’s hard to nail down why it is exactly. Maybe Beyerdynamic tuned these together.

At any rate, I sure as hell wouldn’t pay $300-$400 for it. If it was regularly priced at sub-$200, and they could eliminate the noise issue, I think this could be a real winner. I was lucky enough to get this as part of one of those Beyerdynamic bundles that pop up on Amazon from time to time. I got this, the DT1770s, an extra carrying case (?) and an SD card (???) for only $100 over the retail price of the 1770, so I got it effectively for free at the time.

Like I was saying on the Patreon, this amplifier has a really high output impedance. It shines with Beyerdynamic’s own high impedance dynamic driver headphones, as well as a number of Sennheisers and ZMFs, but it should never be paired with low impedance (i.e., sub-250 Ω) cans or planar headphones. I was pretty disappointed to see Zeos not pull out his HD 600 for this review. The A20 is completely lacking in versatility, but, as someone who loves his DT 1990 Pro, it’s an amazing amplifier. I love its simplicity and its build.

As for the above post, I have noticed that the A20 seems highly sensitive to any source noise. It is unusable if connected directly to my PC with an RCA to 3.5mm cable and as useless connected to a number of DACs. Somehow though, it sounds perfect for me when connected to my Schiit Gungnir Multibit w/ Gen 5 USB or to the Schiit Bifrost Multibit w/ Gen 5 USB. I figure it has to be something with Schiit’s newer USB implementation, but I really don’t know. Picking up a Topping D70 from Massdrop and I’ll see how that does in a month or so.

I recently heard, and I’m not sure how true this is, that high output impedance is really only an issue if the impedance of the headphone you’re driving is variable. So a planar magnetic might actually be a more ideal headphone, as they aren’t reactive loads on the amp. I’d be interested to know how true that is.

Either way, apparently the most ideal setup has the headphones being at least 8x the impedance of the headphone out. Not really an issue with 99% of amps, as they usually sit at 1ohm or lower. So knowing that it’s a curious decision on Beyer’s part putting the 100ohm resistor on the headphone out. It would mean that basically the only ideal headphone to run off of this is the T1, as it’s impedance runs between 600ohms and 1400ohms.

Has anyone tried this amp with the DT880 600 ohm headphones? 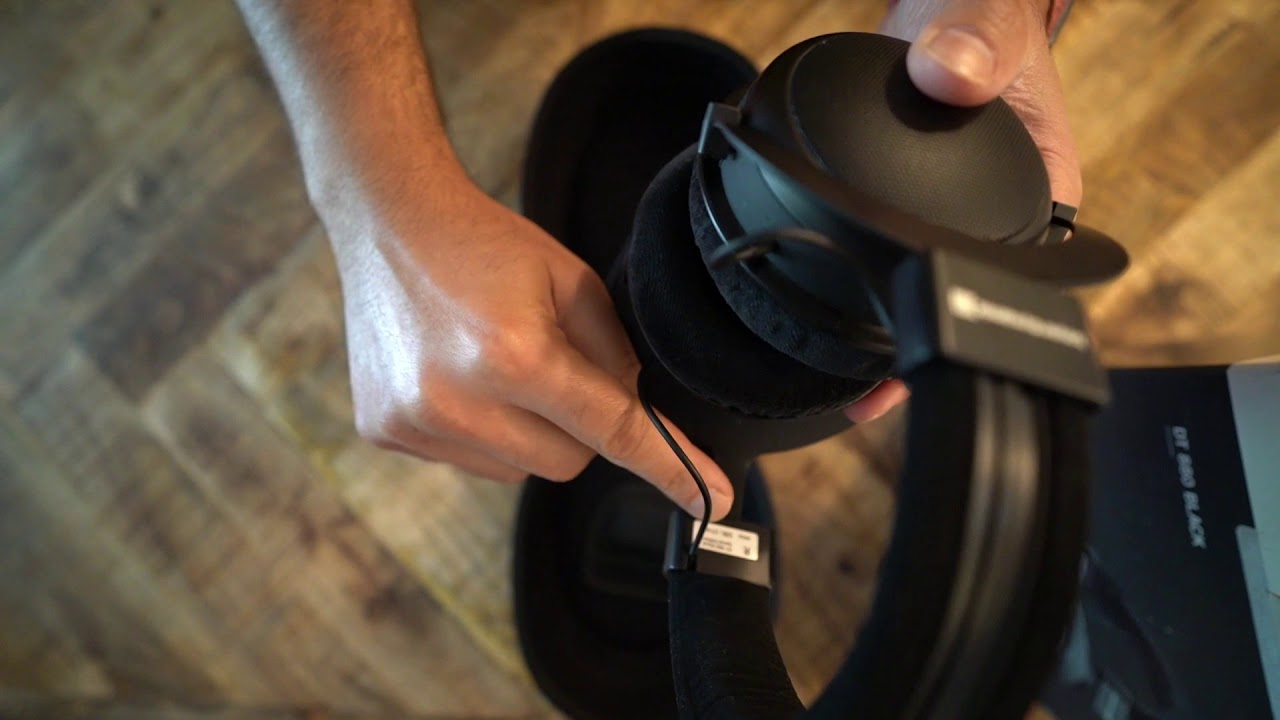 The A20 is rated at 100mW for 600 ohms and it can drive them. Good lord this boy gushes quite a bit in his review lol. Though, I actually didn’t notice a special black edition of the 600 ohms existed. Those do indeed have a different tuning. I might have to pick those particular headphones up sometime to try them out. This guy should probably sit down with the T1 or 1990s if he gushes so hard over the 880s lmfao

Would recommend just grabbing a Magni 3+/Heresy, JDS Atom, Liquid Spark, or something from topping like the A30 which all will be fine lol. If you want that 600 ohms to sound it’s best though of course an amp in like the $200 range powers it to it’s full sound potential but the $100 margin can drive them just fine.

Good lord this boy gushes quite a bit in his review lol.

Yeah, I noticed that along with a few other things that I didn’t particularly like. He seems fairly intelligent and I like his curiosity but he still has some “room for improvement” (as noted in the DT880 600Ω thread.) lol.

This guy should probably sit down with the T1 or 1990s

Yeah, he should! He might be new to the Beyerdynamic lineup (as am I) so maybe he hasn’t made it that far yet? He has a lot of expensive hardware sitting around, so I doubt cost is holding him back.

@Falenkor What did you think of his argument about the 1/8 rule (dampening factor) for these headphones? Could that be why Zeos liked the Emotiva BasX A-100 so much? (Output impedence of 220Ω)

What did you think of his argument about the 1/8 rule (dampening factor) for these headphones? Could that be why Zeos liked the Emotiva BasX A-100 so much?

I do think this may be the case. This is a general rule with quite a lot of headphones and it works. The general issue here is that people think that just because the headphone gets “loud” means that this is okay however, when it comes to amps some just are a bad pairing. While he didn’t compare the asgard as far as his comments on the spark pairing that is precisely what I got dead on. Though his comments on bass rumble and slam are something I never found while using the asgard or spark in fact it just felt rather lacking in general though this could have been that I was using the regular edition and not the black, as if you seen my other post, which is seen in the frequency to supposedly have more bass presence. I’m not really surprised that the amp from beyerdynamic pairs great with the beyerdynamic headphone.

Yeah, he should! He might be new to the Beyerdynamic lineup (as am I) so maybe he hasn’t made it that far yet?

i connected mine to my Yamaha Aventage RXA810 on zone 2, and had the same electrical noise, it doesn’t bother me too much as i use it mainly to watch movies without having to disturb my neighbors.

its a simple, solid amp and i love it.

I wanted to post my impressions here regarding the A20.
There was a discussion on the DT880 thread and didn’t want to deviate it.

So at some point I had the A20 and an Asgard 3 with a Schiit Modius Dac.

I’m inclined towards the Beyer family for several reason, after all these years I felt like i just kept coming back to them.

At the time I kept switching between the Asgard 3 and the A20.
The A3 was the warmer amp of the two but when comparing the A20 had more clarity, detail and tightened up the bass.

I spent hours swapping between the two and after a while i kept using the A20 over the A3. There is just something about the A20 that I liked but I felt that it was a bit over priced in 2020 with all the options that we have now.

For $100 dollars more you could get the RNHP which is what I did after returning the A20.

Both the A3 and the modius were sold which funded the BF2 dac.
I had the intention of purchasing the A20 again at a used price and may do so still.

I know that alot of people complain about the treble of the beyers but for me its a not an issue. I really enjoyed the DT 1770 Pro and the Amirons both in sound and comfort on the A20.

Now that I have the T1.2 i wonder what the A20 pairing would sound like.

Also the pairing of the Modius and the A20 is a great fit and would recommend it as a dac in that price range.

Thanks for the impressions. The more I read about the AssGuard the less I feel it can be justified as a viable amplification option for its price.

For its price the A3 is great especially if you like a warm sound but it can’t compare to the next tier of amps like the RNHP or the LP. Its not even fair to compare really.

If i had not listened to the RNHP or the LP I would have been happy with the A3 but curiosity got the best of me.

Both the A20 and RNHP can drive a 250 ohm hp with ease. I just plugged in the 1770 Pro into the RNHP and they are plenty loud at almost 9am.

From what i remember the A20 was about the same.

The only issue with the A20 was if you had two headphones plugged in I would have to increase the volume to 11 almost 12 but i guess thats normal if an amp is driving two 250 ohm HPs right.

Theres no wrong answer really its just a matter of finding what floats your boat.