As the title states, I recently bought Sendy Aiva’s and a THX 788. The issue… All audio is inverted when it’s plugged into the console. Making it impossible to play any games with as there is no directional audio.

I would still like to use it on my PC for music and movies, but no matter how I connect the 788 the Audio is broken. (Optical or USB)

Can’t you bypass the PS4 but connecting to the TV instead and then send the signal from the PS4 to the TV via HDMI or am I over simplifying it?

Inverted audio meaning? Sound a bit odd if things happen even with USB audio from PC.
Wondering is there some setting in the THX that f’s things up.
Same with all headphones and even if THX is reseted?

I also use HDMI with PS4 -> AV Preamp that can change audio back to TV -> optical to another Pro-ject Preamp and sound’s are just fine.

Can’t you bypass the PS4 but connecting to the TV

This is what I actually do, since I connect my PS4, Switch & occasional PC / phone. All my consoles & devices connect to my TV via HDMI, then optical out to my DAC - AMP for speakers.

Check when possible what gives the Soundoutput from the Tv.
Maybe you see on your Dac how many Khz is possible.
On the Ps 4 pro give just 48 khz,when this ist better on the Tv for example 96 khz keep the connection.

I’ll give that a try. (Just woke up, sorry for the late reply)

From what I have read it’s not specific to the 788. It is an issue with the way Sony sends the sound to amps. Some DAC/AMPs invert all the audio. So, with directional sound any noises in an FPS are flipped. If someone is shooting you from North, the sound is coming from the South. Above, sound from bottom. It’s nutty… I feel like Helen Keller when playing anything sound driven lol…

It is an issue with the way Sony sends the sound to amps. Some DAC/AMPs invert all the audio.

Just by based on this, it would not even seem to be Sony issue.
I would assume audio is coming out correctly at any case. If the input device inverts the audio for some reason… it’s that devices issue. That also would be strange…?
If you connect headphones with to TV or TV plays sounds correctly that kinda test’s that.

Turn headphones around or upsidedown?

Could it actually be headphones cable polarity thing. Left is right and so on.

If my first solution doesn’t work, then I’d say flip the tv upside down and learn to play inverted… 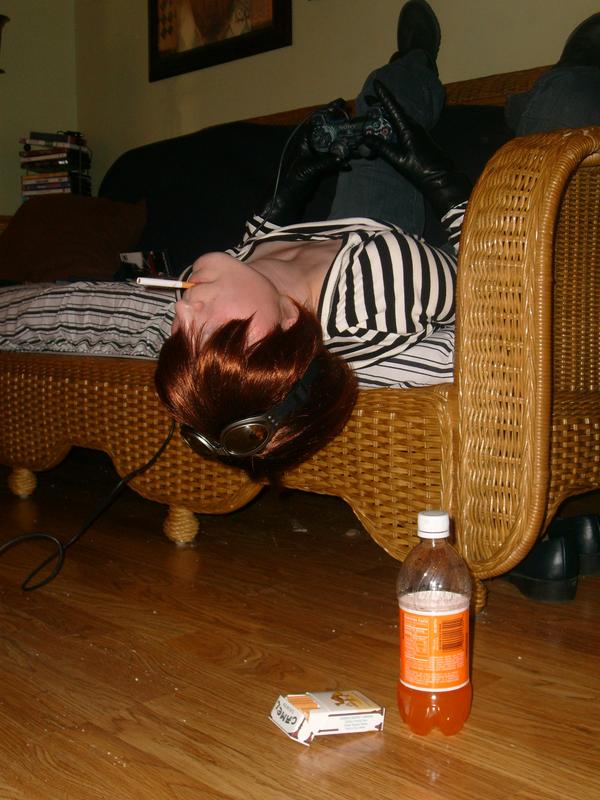 Since issue is in sound… flipping the picture is not a solution that works.
But but changing the cable or DIY / solder modify cable, should actually work.

So I have figured out one issue, but led to another. There was a setting in the PS4 options that I needed to change from Dolby to Linear PCM. USB inputs on a DAC cannot decode the virtual surround sound. This is fixed, but now… The following: 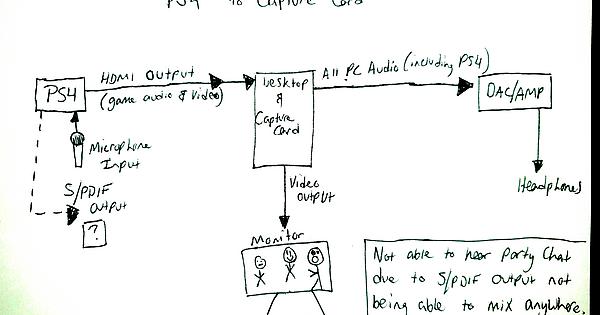 The way I have it now:

PS4 Outputs the game audio and video via HDMI into the Capture Card (Th capture card is in my desktop.)

I cannot hear party chat due to the HDCP Protection needing to be turned off in order for the Capture Card to work. So, the party chat will then be sent via SPDIF cable through settings in the PS4. With my current setup using the THX, I have no where to use the SPDIF cable in order to hear the Party Chat. (They can hear me fine, since I am using a USB Mic plugged directly into the PS4)

On the Astro A50 amp, it will automatically process the SPDIF from the PS4 to the A50 amp due having an SPDIF INPUT. That is blended with the audio being sent from the PC. Still following? Great…

Since you have gotten that far at the first place… but did not mention that.
You should have done tiny bit more research how people capture audio and video + party chat to
a streaming PC with PS4. With that knowledge. You should know what to do with THX.
There is a lot info with subject… took like 8min of research to figure the hardware setup.
Bet you can do it to.

Would you care to enlighten me then? Being condescending is a waste of everyone’s time and contributes nothing.

The issue of recording everything was a nonissue with the A50s - which I finally want to replace. I have been doing what I can in order to rectify the issues.

I am new to using higher end media, hence why I have asked for assistance. This is all new to me. We all start somewhere… I don’t even know what to type in Google to begin searching.

If you mention using Elgato’s chatlink, that is not an option. There is no point in going into a long explanation, as this is simply not compatible with my set-up.

So, currently where I am at with figuring it out, is how to blend audio from SPDIF from the PS4 and an Audio Output from my Desktop. If I can mix/blend/combine these 2x Digital Outputs to then come out of a single source, then I have resolved my issue.

This is a solution I think may work: 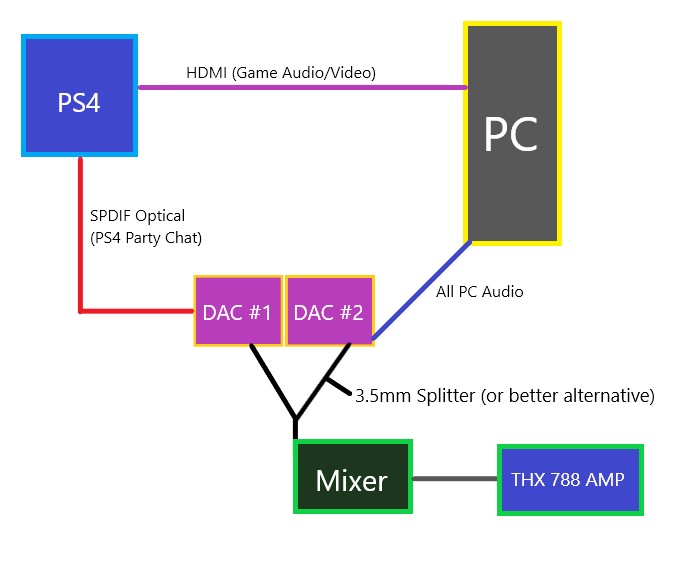 Does anyone see why or how this may not be an option?

What’s the purpose of the mixer?

Edit: Never mind. Saw previous post. I haven’t seen anything like that but would be cool if it existed. My concern with that is it will probably distort the signal before it hits the THX amp.

Maybe the answer lies in figuring out a way to get the party chat (no idea what that is) past what’s blocking it your pc?

Hmm. I’m not very sure how this works really, but have you checked out some of the streamer’s setups? Might help to understand how they do it. Otherwise do you think a Bluetooth mic would work to separate the in game chat from the audio?

So I ended up getting it to connect and work flawlessly without needing to buy more hardware. I needed to change a setting in my recording device to listen to the SPDIF input on my sound card. That way it was treated like an Input Mic. Thus passing all sound from the cable through my output (the amp).

So after many many hours of tinkering. It works. sigh of relief