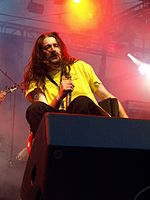 Optional discussion topic: Is death metal the most exciting genre in music today? Jeff Becerra of Possessed thinks so! https://youtu.be/-LEBZrV-594?t=660

He’s definitely biased, being one of the founding members of the first death metal band, but his soundbite on the topic is fairly compelling: “I think it’s equivalent to the golden age of jazz. It’s one of the, if not the most exciting genres in music today. To the trained ear, it’s going in so many different directions. There’s so many flourishes and creations, to tech death metal, to the gothic, the Viking, there’s just so many different kinds of death metal. There’s so much to pull from on resources. It’s really exciting.”

Post some exciting as fuck death metal regardless of if you agree. I’ll bump this thread with both favorites and 2019 favs.

I GUESS I’ll start with the OG. It still hasn’t clicked with me as a masterpiece yet, but on paper it’s perfect and undeniably one of the most influential recordings of all time.

Alien, strange, atmospheric, brutal, progressive, catchy. This record has it all. The full package from where I am. Perfect.

I definitely have a type! This album is cursed as fuck. Absolutely godawful production & no catchy songs to speak of. But what an atmosphere! It’s like a grainy cassette recording of a rock ‘n’ roll band playing in hell. Am I in the right forum?

Finally a favorite of mine for the audiophiles! The magic word ‘remastered’. Chaotic as hell, but tightly controlled. Imagine yourself in a mech battle to this.

And I’m more into melodeath, so:

Another “remastered”. Don’t know how, but they made a metal zone pedal or a boss HM-2 pedal (or both!) sound like a boosted Peavey 5150/6505 with the remaster. Heh.

What up!!! I also love SweDeath / some melodeath! Dismember is my fav out of these lads but the rest are great too. What’s your take on Slaughter of the Soul vs Blood in the Sky? I’ve listened to both equally little but currently have the ‘boring’ Slaughter preference.

Here are my top albums, though keep in mind I’m more of a prog and core kind of guy so apologies if these aren’t that obscure.

No apologizing in this thread! Commercial and widely acclaimed death metal is welcomed! It isn’t a death metal discussion without Death themselves so thank you for popping that cherry. My fav Death is Leprosy, but I love their proggy era too.

I challenge your supergroup match with Brujeria (cheating? idk their lineup has a crazy history and I love them): https://youtu.be/hk21JZw6AUM

Yeah Death doesn’t really have a terrible album. I don’t listen to Scream Bloody Gore much but it has it’s moments. Human is a close second for me though.

Early Death imo came pretty close to reaching metal perfection. Human was absolutely a necessary pivotal moment in their career, and it’s a record I respect, but I think I feel towards it what you do to SBG.

I think like Human so much because I’m a big Cynic fan. (Like I said I’m more of a prog guy)

Let’s prog it up baby! I really need to revisit the prog/death greats like Cynic and Atheist- it’s been a while

Don’t listen to a lot of Death Metal, but I do love Deathcore. Check out Suicide Silence or Thy Art is Murder

Very much anticipating this one. Their last record didn’t floor me but got my attention. The preview track for this one is immense.

Dunno who these guys are but this is the most evil, cavernous thing I’ve heard all year

Is Code Orange death metal? (Bad with genre) If so, their album Forever is pretty great. https://youtu.be/1-Ka0YhwegU

Code Orange are metalcore, but that’s definitely a notable record worth mentioning somewhere! Hopefully someone better with the genre than me starts a metalcore general thread.