Welp, I’ve always had bad luck with amps I don’t build myself, and this is no exception…

The Phonitor 2 Decided to Die on me in less than half a day, and I believe it’s due to 2 open diodes in the circuit. I have extremely bad luck If I don’t build things myself, so lucky day for you all, you get to see a Phonitor 2 on the inside, I’mm post a pic now. 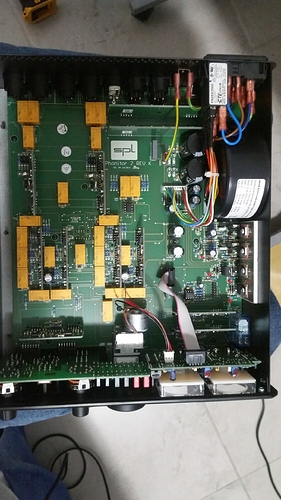 Oh it also took out My IEMs while it was at it. Time for some repairs I guess.

Thankfully it seems as I predicted and disassembly will be easy. I’ll post the individual boards when I’m done.

Well, this is interesting. Again not making me happy overall about the product but curious to see how hard the fix will be.

atm, it’s 2 Diodes that are open, and they are not Zenner, just regular diodes, 13 cents each, I’ll also check the amp for any other issues, other than that, the fix should take just the time the parts take to get to me, and the time it takes me to remove the board.

Oho, but I’m NOT just going to fix it, I’m going to mod it too, make it better, faster, harder, stronger, cuz why not you know?

That makes me happy to hear. This way if mine comes in broken or whatever I’m calling you for help!

Thanks for the DIY Forum @M0N

My DIY RNHP has its parts stuck in shipping (because lead time on low volume of high quantity parts, go figure). This thread is perfectly timed!

Not a fan of the board layout.
If I was to design that PCB, I would put anti tracking slots here: 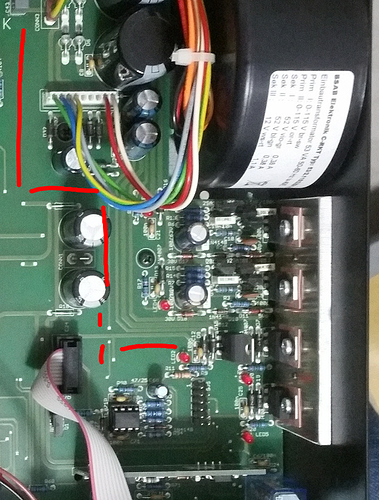 Oho, but I’m NOT just going to fix it, I’m going to mod it too, make it better, faster, harder, stronger, cuz why not you know?

Thanks, almost done disassembling it.

Ok, so I finally dismantled it, and it’s a bit more than I can deal with with being awake over 30 hours already, Ima go sleep, and regroup, gonna test the transistors first, already go their schematics, then I’ll test the vertical boards, then I’ll test the resistors, and then the LED/Diodes for last. It’s not that complex honestly, but I need to sleep.

I’ll Post more in the morning. Hopefully it’s only the two 1N4007 Diodes that have failed, since I really don’t want it to be too broken. Idk, maybe replace the Op Amps for starters once I fixed it and start to mod it (I think they’re Op Amps, the two 8 pinned chips on the board).

Here’s a Picture of the Board, Transformer, and VUs. 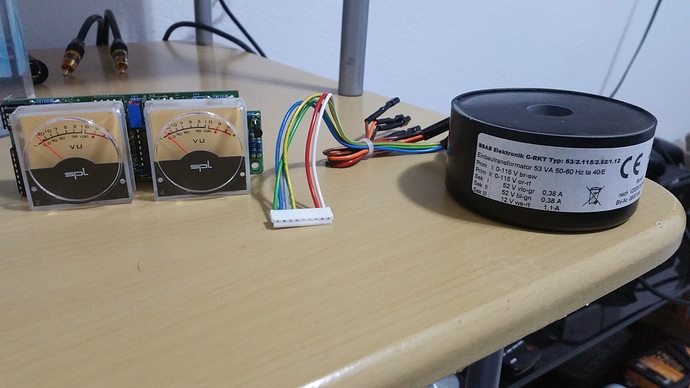 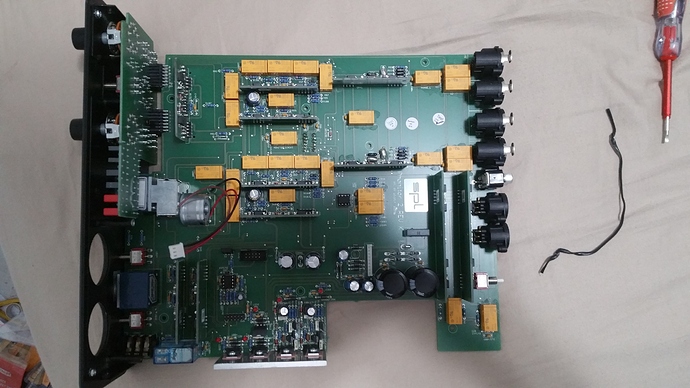 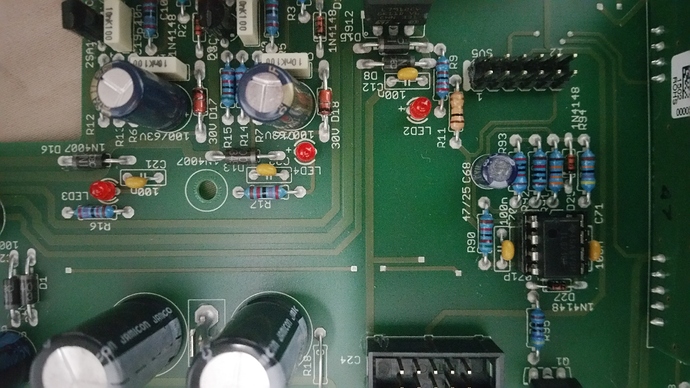 From what I can tell from a quick Diode check, D13 and D16 in the last pic are Open, so I have to assume they’re broken since Diodes tend to block one way, and have a Vf in the correct direction.

I’ll test the PNP/NPN transistors on the Aluminum Heat Sink and the Vertical Boards tomorrow, and check the Relays to see if one hasn’t failed, just in case.

Can’t wait to see this!

OK so I can’t sleep at all, kinda thinking, what if the diode isn’t bad, and it’s more like, the circuit returns to both ends somehow, so while soldered on the PCB it LOOKS open with a diode test, but is actually fine and it was all a fluke with the fuse/IEMs fucked with the Amp for some reason.

Something is odd, it’s too much of a coincidence, I’ll check tomorrow tho, tired but can’t sleep. Too curious but don’t want to Solder and be Sleepy (Like Drinking while Driving but for Soldering).

I’ll remove them tomorrow and see if they are functioning, idk have that theory still pounding In my head.

If they actually are open, then I’ll replace them, maybe with higher quality ones with the equal or applicable numbers, just for the hell of it, maybe start researching OP Amps for some rolling. Maybe get some nicer caps too, gonna research the ESR Rating on the caps on the board and see if there are lower ESR ones, maybe German F&T caps, seems fitting seeing how the amp is German. Change the transistors too if there are better modern ones. Idk, depressed about the amp, but excited at the possibilities.

The Vertical Boards are going to be more difficult, might take a day for me to check them all thoroughly to check for damage if the Diodes really are open. Also they have .1uF (100nF) 50V ceramic (Ceramic?) bipolar caps as a bypass to some of the electrolytics, maybe say fuck it and buy some Mundorf ones and make them fit in their place. For the meme. Fur Das German Meamiz.

Oh also the Relays are Panasonic, weird tho since they seem to be made I China, I thought Panasonic was Japanese, but whatever. Not changing them since they’re essentially fast switches, but checking them anyways.

Man great opportunity to also see how transistors work, some are NPN, others are PNP, so kinda curious to see why they’re in the position they’re in.

Also Bridge Rectifier seems to be the ones parallel to D32, there’s a screw hole spacing one out from the other three but the way they’re positioned is truly the one recognizable thing in this entire amp. There’s a bit of comfort In that honestly, knowing you know something that you’re trying to know.

Honestly, sucks that I lost $250 IEMs, but hopefully it isn’t the amps fault and my theory that the circuit in this part is circular, and they use Diodes to prevent DCV back in the same direction, but due to this the Multimeter tells me that there’s an issue is correct.

Also the Pot is an Alps 2 Gang Stereo Pot, so I think the rumors of it not being truly differential are credible, maybe it does something with the phases though and technically is balanced but not Differential (There is a difference), like the regular THX stuff, idk.

Actually instead of replacing the caps on the PSU that bypass the electrolytics, maybe change the caps where all the knobs with the cool settings are. Technically those are more in the path of the audio than the Power Supply.

Fuck it why not, Vishay resistors too while I’m at it, for the meme.

Oh shit just realized the vertical Boards have model numbers, maybe I can buy them already built if there is an issue with one of them. Saves me the time and effort since I’d need tools I don’t have, stuff for surface mount soldering that is.

NVM, guess if one of the parts is busted, I’ll need a Hot Air Station, The numbers for the Boards must be specific to the Phonitor Manufacturer, so I can’t find the online, they have QR code things o. The back, hmm.

It’s basically impossible to test components on a board unless you know what the circuit is.
How did it fail?
Start by testing the PSU section.
If there are any fuses test them.

It’s basically impossible to test components on a board unless you know what the circuit is.

Yeah see, that’s what I was thinking too, kinda odd two Diodes that look perfectly fine test “Open” on the PCB, want to test them by removing them and just test the individual component.

Essentially had IEMs plugged in (gave them to my dad since he somehow lost his DT770s) and the amp decided to blow them up, both fuses were wasted, one completely snapped, the other seemed to be burnt, guess since it was a slow blow fuse.

My guess is that the IEMs shorted the amp for some reason, idk how SS works In this regard but it’s possible one channel was shorting something in the amp, and essentially messed with an output buffer or something? Idk.

Oh also, yes, I did Mute the amp before plugging them in, and had the pot at 0, disabled mute, put the pot to about 1/5, then he wanted to listen to Bohemian Rhapsody, and as soon as Mercury started crying to his Mama, Snap, both drivers instantly failed and both fuses failed too.

Idk, about a minute into the song. Idk what went wrong, it was TOO spontaneous honestly, nothing else failed and I had some of my cans cranked WAYYYY Up before that, so idk, kinda guessing the IEMs shorted something.

I’d start by assuming a temporary short, replace the fuses, power on with nothing connected and see if they blow again.

Yeah good idea, honestly just a bit panicky, I’ll order some fuses in the morning, 1A 250V Slow Blow fuse (based on the markings on the fuse) and go from there. I’ll reassemble the amp tomorrow and prime order the fuses for Sunday.

Also it apparently uses two of them since both were affected, idk why two fuses but I think it’s due to the transformer having a center tap (115 - 0 - 115). Idk, never seen an amp use two, can’t think of a good reason why.

Oh also, It wasn’t due to an external over voltage, I know that much. I have a Power Conditioner that shuts off all power connected to it if power outlet voltages reach 137V. I got no warning, and the lights in the room didn’t suddenly get brighter (I have a resistance bulb in my lamp, I’d imagine if the voltage went up then that bulb would have gotten brighter I guess.

Idk super tired, starting to talk gibberish (well that’s kinda normal for me tho), thanks for the advice tho, sometimes you just need to test the basics just to make sure it wasn’t a simple fluke. Besides most time when a fuse goes they tend to tell you to just replace it and check if it blows again first. Idk combined with the lack of sleep and panic of the HP out breaking something, I guess I started to over analyze stuff. Thanks again, gn.

Maybe get a 1/4 to terminal block adapter to have a look at output voltage. 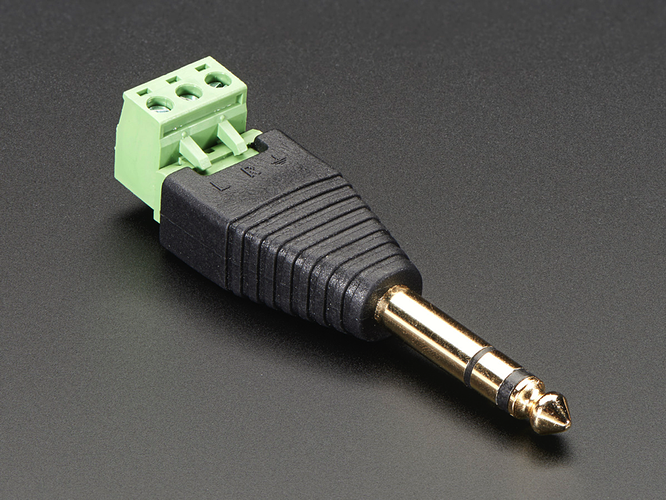 Huh, didn’t know those things existed, guess I’m buying one then and testing it out. I’d imagine they’re cheap since they didn’t use an audiophile grade jack.