I’m still in the kicking tires phase still but have been researching my potentially endgame speakers.

When I started this quest, the Buchardt S400 was the target. Since then I’ve had the chance to chat with a few reviewers who preferred the S300 mkii se so I added that one.

But then it occurred to me I’d have to go beyond my $2k soft limit. So now I’m at $4k. Once I expanded I have been sort of obsessed with the Spatial M3 Turbo S. I have no experience with OB so my first curiosity was the bass. I like a balanced sound (leaning warm) but lots of my music is bass heavy.

The system I am building will be all Odyssey amplification
Khartago (110 wpc class AB solid state with excellent current throughput).
Candela tubed line stage
Suspiro solid state phono stage
Current speakers are Focal 807v (which I like other than their bass)

My living situation will probably involve constant shrinking of my area so I had been leaning heavily toward bookshelf/stand mount so I can stay agile.

I spin vinyl, playing lots of classic punk and reggae, 80’s and 90’s alt, metal, a touch of jazz and lately a ton of experimental/power noise and black ambient/ritualistic music.

I really do NOT want to have to run subs. I’ll have the ability but I really want to avoid it.

I’d love some suggestions to research

Not missing a word of this!

Thanks. The BW 805 D3 seems interesting but at $6k it’s out of range. Curiously though BW seems known for being light in the bass from what I read.

Can you expand more on why you nominate the 800 series? I’m genuinely curious.

Sorry, im not good at forums

But these have been my endgame idea for a long time. like the styling, quality and based on the lower end models (i heard the B&W 685 S2 some years ago in an audio shop and it was lovely, but couldnt afford it at that point) i would assume that i would absolutely love em. Should go and listen to their big brothers, the floorstanding version, at a local audioshop but i dont want to bother the salesman - he knows that guy like me could never afford 20k pair speakers

and damn, i thought those were under 5k a pair… oh well…

Dynaudio Special 40s $3000
I had a listening session recently and these are quite special. Bass is very impressive for bookshelf.

Mark & Daniel Maximus Ruby Mark II $2700
These are bonkers and kinda my dream. You order from Shanghai, shipping included. Synthetic marble should be ideal to drive bass without cabinet distortion.

Those M&D do seem bonkers! I’ll look into those.

I’m curious about Dynaudio but have never heard any. I’d really like something that goes down into the 30’s on the low end. I’m trying to to have to resort to subs.

The Mark and Daniel also have a big brother, the Maximus Monitor MKII.

Mounted bookshelves going that low are few and far between. I am wary of just written specs too. Marketing buzz around spec-sheets it’s an actual thing.

If you do not want separate sub, but can accommodate a floor-standers, I’d say the Goldeanear Triton Two+ should be on your radar. They have integrated powered subs. I just auditioned them with PS Audiostellar s300 and Parasound 21 and 23. Earsplitting bang for buck. Ugly as sin.

I can accommodate floorstanders but I’m trying to stay with stand mounts. I’m unsure of just how small of a living space I’ll end up in so I’d like to be able to adjust as needed.

I’ve looked into the Tritons and they seem to be a polarizing speaker. I’m down to hear anything really. There’s a local event coming up and several speaker manufacturers will be there so I’m hoping to get a feel for what brands do what.

Spatial will be there and since the M3 Triode Master is on my list (yep, a floor stander) I’m psyched to hear it. People running subs w/them has me worried. That’d max my budget and if I STILL need a sub…ugh. From what I have been told, rock/punk/reggae style bass is no problem but getting into Scorn style sub bass exploration is where things fall short. I’m dying to get someone to try it. I’m hoping to when I’m there.

Scorn is new for me. Industrial dub made by Napalm Death folks. Fuck me sideways. Are you trying to avoid a dedicated sub because of space? Scorn tunes are screaming for a JL Audio e110. Please don’t hate me.

Specifically the Scorn track “Look At That” off Logghi Barogghi. That insane sub bass, if speakers do that to a decent degree then they’d be good with Trepaneringsritualen, MZ.412/Nordvargr and Vril Jäger.

As for subs, I’ve read much about sealed, servo subs and well, my preamp doesn’t offer any kind of bass management so blending might be an issue.

As for subs, I’ve read much about sealed, servo subs and well, my preamp doesn’t offer any kind of bass management so blending might be an issue.

I’m a bit of a noob on this but the JL e110 I mentioned comes with a calibration CD and you do not need any calibration from preamp. Additionally you could use a miniDSP HD to blend them correctly. 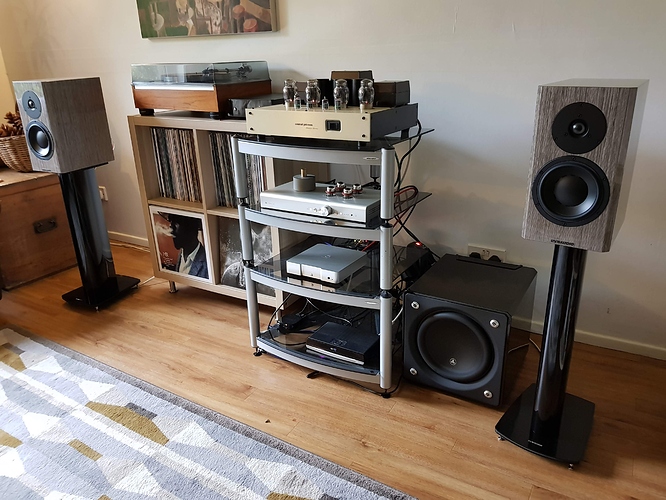 at the risk of getting hated on. here we go. Have a look at Beolab 17 to me they sounded great, but those are active tho. for a normal room you don’t need a sub with those and they push a bigger sound than anything in their size. Demo it.

These 2 speakers would also be my choice in your situation. I made a small comparison for you, since I’ve heard both. But I’m a bit biased, since I’ve been using Dynaudio Contour 1.3 mkII for ages (sonically the role model of the Special 40). I don´t know any other speakers that likes to play old vinyl and dos not always have to play very loud to sound good. Although I have already bought many other speakers, I always come back to Dynaudio. With both speakers, I would think about more stable levels and fill them with sand, if the bass should be really good. 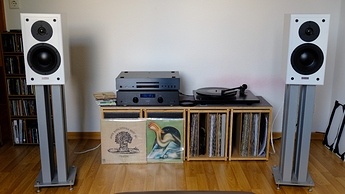 @ephreet I love your System

That is not my system! That is what I aspire to have tho. But yes, it looks (and I bet it sounds) amazing.

Thanks for your informative post. I am now closer than ever on pulling the trigger on some Special 40s.
The plan is to pair them with a Wyred for Sound ST500 and the JL e110 or just with an SST Son of Ampzilla II.

Btw your set up is top notch!

The Wyred for Sound ST500 looks like a good amp, but I do not know it and have no experience with Class-D on Dynaudio. These speakers have taught me a lot, especially what difference amplifiers do make and where you must invest your money in. On my 1.3 mkII I had bad sound experiences with: Yamaha AS-700 (no bass, too weak), Rega Elex R (too weak, mids sounds unnatural), NAD C 275BEE (just not clean enough, did not make fun, the most unreliable amplifier in the world) Good partners: Vintage Japan made 1980 Technics SU-V8 (incredibly warm, beautiful and musically but unfortunately very vulnerable), Audionet SAM V2 and SAM G2 (just clean and neutral Class AB Power, the highest resolution I’ve ever heard). With Dynaudio you are best served with neutral and clean as well as powerful amplifiers, much damping cannot hurt either.

The Special 40s do not really need a LowCut, because they are extremely load-stable and Dynaudio already knows how to build their speakers (not like Buchart whose S300 explode with too much power). That’s why I would go for JL and pair it via the speaker cables, not RCA!

Interesting. Actually the Special 40’s were originally on my list but I do t have a way to hear them and they need a sub which I had been trying to avoid.

As for the s400, it’s interesting about the muddiness and also brightness you mentioned. I chatted with Thomas (& Stereo - YouTube) and he told me the s400 has a natural tweeter (ala Harbeth) vs the s300 which has a more assertive tweeter.

I’ve not read anyone describing them the way you have. That said, I’ve sort of eliminated them because I feel like they’d be an upgrade or positive side move but not an endgame move. Which is why I’d become much more high on the Spatials.

Have you considered the Monitor Audio Gold 100? I’ve heard nothing but good things about them.

Genelec may be another option.

I did hear a lower model I think. Sounded good but didn’t grab me.