A classifieds category is awesome for a small community, but be very careful when going down this path, as it will bring in outsiders which do not really care and just want another place to spam their ads.

This again is not really a problem, but the moderation teams needs to be able/willing to cope with it once it starts going.

My vote would be against it, from experience seeing local forums, the classifieds section turns into a cesspool unless strictly moderated. Not from the fault of the community, it’s just what happens as time goes on.

Personally am very much for a buy/sell section. Pretty active buyer/seller (mostly buyer these days) on other sites. Would happily list here first

A classifieds category is awesome for a small community, but be very careful when going down this path, as it will bring in outsiders which do not really care and just want another place to spam their ads.

This can be easily done and something I would have done in the first place.

yes…on CanadianGunNutz the ‘Equipment Exchange’ is a secured sub-forum that you need to have so many posts and days of forum membership before you can request auth for access. they also rule the EE with an iron fist and hand out strikes demerits for anyone that breaks a rule, with the no bumping thread for 7 days. lots of people do it on a 7th day, which is actually only the 6th. now they have it so you get an error message to ease up on the demerit issues as after so many, you’re auto-booted from accessing the entire forum for a week or something.

I’ve seen such restrictions fail miserably, when people start spamming random threads with irrelevant comments just to up their post count to hit the limit.

Discourse(this specific forum platform) is smarter, but not infaillible.

In the end it comes down to “is the value added worth the effort”.

I am one of the folks that like the concept but worry what it will turn into, I’m almost of the school of thought to keep stuff personal between folks via mentioning something here and there. Once an official section gets formed it drags out all sorts eventually and ruins the close knit atmosphere a smaller forum like this has developed.

I have never had any issues buying and selling on some of the larger forums, but that doesn’t mean a thing nowadays. There are all sorts of con artists out there who are happy to make a quick scam and run for a few hundred or thousand bucks and then everyone affected is jaded and angry for months. Also, all the folks who spam adds come out, that sucks too.

There is a little bit of trading and selling going on behind the scenes, It’s a nice place here, I would like to see it stay that way for all. I wish us luck whichever direction we head in. I know there are several folks here whom I would exchange money with and NOT have any issues or stress over, and whom I actually would be happy to offer first shots at etc. I would almost prefer a closed system if we did anything, just for the “locals”… IMO is all.

the moderation teams needs to be able/willing to cope with it once it starts going.

No sleep for these lovely people then: 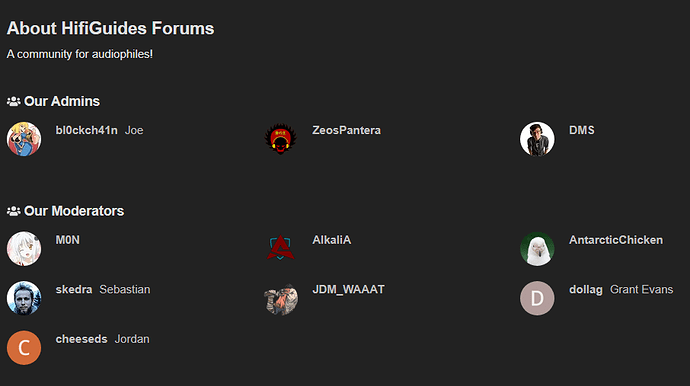 what the deuce? there are other moderators besides M0N? how the heck am I not one of them, then?

There are supposed to be more, not that I’ve seen them.

Lol m0n is the only active mod, most of those people are more active in the telegram chat than on these forums. Unless they are doing a bunch of moderation and sysop work behind the scenes which I highly doubt, they should probably be replaced with active community members tbh.

Just take a look at their forum stats compared to some of the regulars. It crazy that every single mod besides M0N has less than 10 hour read time and barely any posts. Several of them haven’t even been here since last summer… Let alone posted last if ever. With a community that is growing as big and as fast as this one it’s ridiculous that there is only one active mod. Props to M0N for keeping this place running.

what is the ‘telegram’ chat’ you mentioned?

Most of the mods are active members in the telegram chat and his livestreams.

Is there a site where the payment can be in a escrow style? would help with any legal issues and payment stalls

I agree. Lot of drama and elitism from what I experienced of both places.

I would say moderating makes a good moderator lol

I dont see why this couldnt be a thread, its just funny that Zeos had a hand in creating AVexchange

Hey we just need approval lol, it’s not my site, I’ll just have to deal with it once it happens

No it doesn’t, you are right. But being active is required of a good moderator. From my experience the best mods are the ones who are in touch with the community and actively adding to discussion on a regular basis.