anyone try this kit? I’m in Bolivia and I was thinking to try DIY because here is hard to get good or even try to listen good speakers reasonably priced, and with this kit I can make the cabinet for cheap.

I’m giving it a shot, we’ll see how it goes. I probably won’t have anything to report for a month at least lol.

Im very interested in this kit as well. How are most people powering these speakers? Thats another question I have.

From the product page: “The X-Statik speakers are 8 ohms and have 91db sensitivity. -3db down is 48Hz for an average room.” Once I get them put together and tested, I plan to run them off of the same Ghent GA-S250P amplifier that I currently run in my living room (125w/channel @ 8ohm).

i have not heard them, but they are suppose to sound pretty great.

as an alternative in the same price range. these are also suppose to sound good

So how did the DYI projects turn out? I just ordere a kit from Hivi Swan: https://swanspeakers.com/product/hivi-swans-bookshelf-speaker-diy-kits-diy3-1/

Unfortunately, business scheduling and COVID goofiness have kept me from getting too deep into my build. I’ve got the crossovers de-populated and re-populated, but I’m still trying to secure a cabinet builder (I am space and tool-constrained where I am atm). I knew that this may turn into a long term project when I undertook it, so I am in no rush.

I’m in a similar situation, but went ahead and ordered my first flat pack from Hivi/Swan. So In theory, I am short on large cabinet clamps, wood glue and what ever I decide for the exterior finish. If it goes well, I wanted to try a flat pack from GR Research. Then the never ending journey of pairing with that “perfect” combination of source, DAC, Amp and room treatment.

Good luck on your build! If you end up going with a GR Research kit and want a flatpack, I know that there are numerous options for the X-LS Encores. I’m probably going to end up trying to commission complete cabinets from Mike Lundy if I can’t get them built locally, and then I’ll finish lining them and doing the final dampening, fitting and wiring.

Well so far I’m pretty disappointed I placed the order Dec 12 and it said it took 2 days for it to ship out. I have not heard back from anyone at Swan. I’ve sent several emails asking for information and nothing back. They certainly did not have any trouble processing the charge on my credit card though.

I’m about to cancel the order and try just doing as you said. After checking out the website and various reviews I’m curious about Danny’s new line of open baffle speakers. Mu problem might be that I do not have a room large enough for proper placement of them.

Room on the sides is not as critical with open baffle speakers as it is with cabinets. You do want generous space to the back wall though. But that shouldn’t be too much of an issue - you can pull them out for listening and push them against the wall when not in use.

I ordered and built the same pair. I altered the design and added a second woofer, just because,lol. I like them a lot. Not going to impress my serious audiophile friends, but excellent for the money. I thought mine were a bit too bright on the top end, but found a site where a guy measured, and offered several crossover mods. I ended up adding a resistor across the tweeter and that really toned that down. Fun project, and mine play louder than hell. I’m pushing them with a Musical Fidelity 5.5 w 200+ watts/ channel and I never turn it pass 9. Could probably get great sound with as little as 35 watts . Again ,not Focal,lol, but decent bang for the buck.

Just joined this site, so I know this is late, but I’m listening to mine right now. I built them last summer. LOVE them. Could use a larger room, as mine are not quite 3 ft from the back wall but they still sound great! I went with the full crossover upgrade, and have no regrets. My buddy has Vandersteen Treos, ,$5k.,and I wouldn’t trade.

Update on the Swans HIVI I ordered. I posted a complaint on their Facebook page and I finally got a response. I received the flatpack a week later. No communications or apologies other than I noticed they never processed the order and I was not charged for it. So 5 stars for free speaker kit! I’m moving to a new house and plan to build the kit as my first project after I settle down. I should have enough room to justify ordering the X-Static and placing them properly in the new listening area. I made a huge mistake of getting rid of a pair of Anthem amps “to make room” while I downsized so I will be in the hunt to find new amplifiers to drive me speakers. I current setup isn’t terrible as I get by with an older pair of KEF driven by a Denon integrated AV unit. I’m scared but I know tubes are definitely going to be in my future after experimenting with some tube headphone amps though.

Thanks for posting Anton23. So are you saying you upgraded the already upgraded crossovers from GR-Research? I thought that dude was known to exactly that. He takes other speakers and upgrades their internals.

He tunes everything to be flat. Flat may be too bright for some, too dark for others

Also new here to this forum, but this thread got my attention since I own an original pair of AV123 X-Statik’s from 13+ years ago when they were first released. I called and spoke with Danny Richie several times over the years about various open baffles designs and such, as well as about these X-Statik’s. About four or five years ago, I fully upgraded everything on the crossovers except for the inductors. All the caps and resistors were upgraded to Danny’s recommendations. I also removed all of the original felt/wool damping material in the sealed bass enclosure and replaced it all with Danny’s No-Rez material.

I know I left out about a dozen other amps in there somewhere. I can’t remember them all.

Point being, the X-Statik’s are rather efficient, are easy to drive, can get pretty loud and stay clean with just about any amp you throw at them. They are very natural sounding, and in the few rooms that I had them in, they extended down to mid-30’s with good useable output at those frequencies.

I have a pair of NHT 2.9’s, a pair of Martin Logan SL3’s, a couple pairs of Monitor Audio and Triangle tower speakers, and over time, I always tend to come back to the X-Statik’s because they are THAT good, especially after the crossover upgrades and addition of No-Rez.

I also have the original, un-modified X-Voce center channel, which is the absolute best sounding center channel I have ever heard at any price. But I no longer do home theater, so it just sits, safely stored in the spare room.

Just for fun, here’s a few of the latest pics from several months ago, as well as a couple pics of the upgraded crossovers and No-Rez… 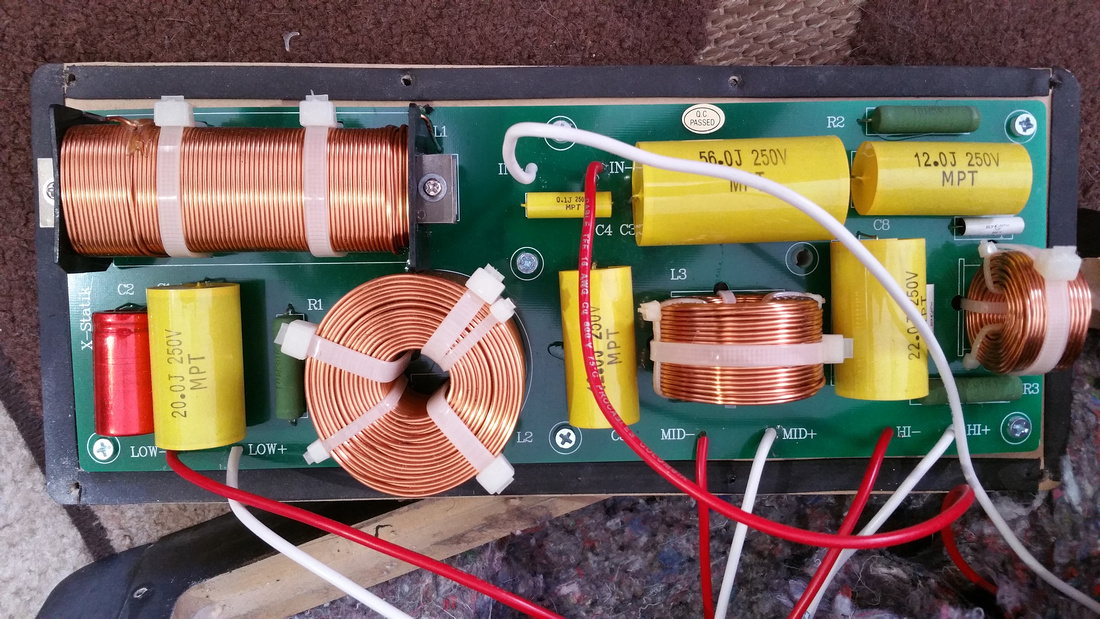 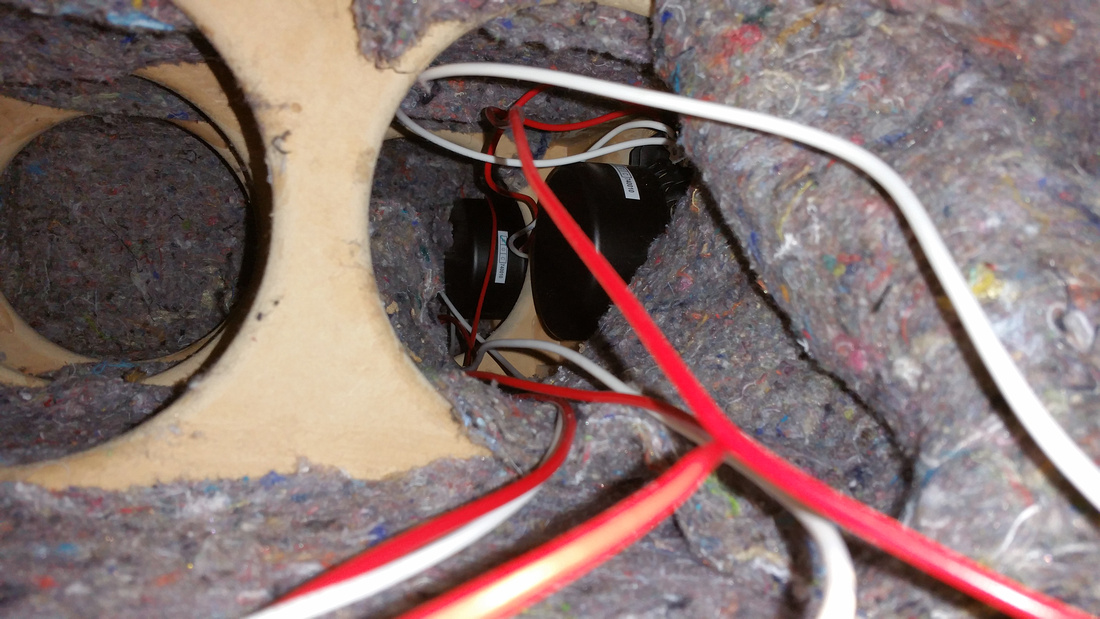 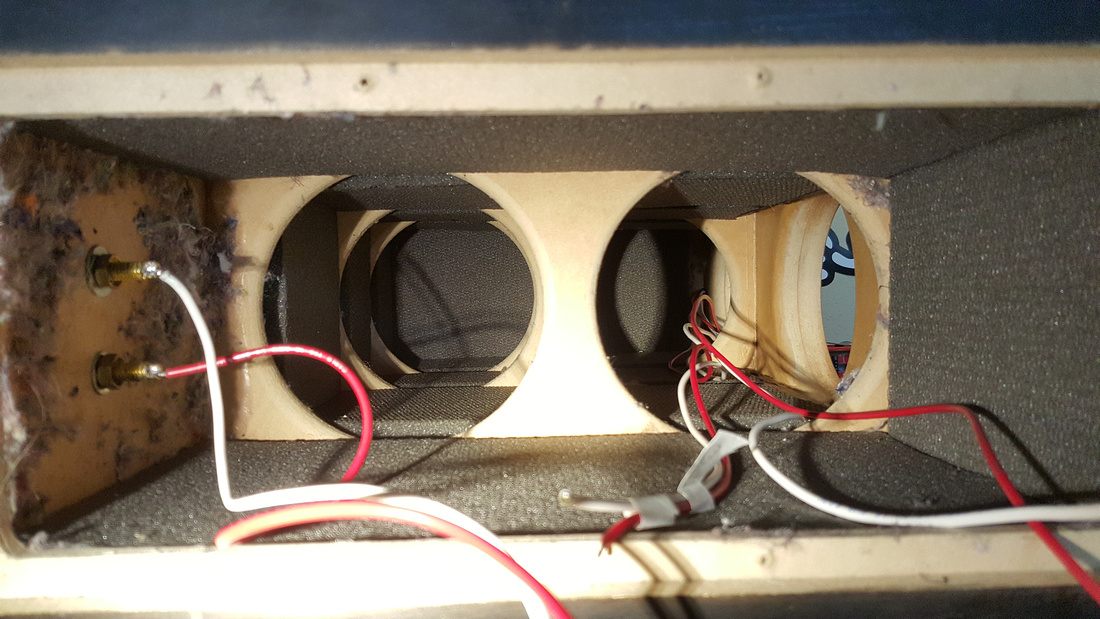