I’ve never heard of this company before, which makes sense, they apparently launched in 2017. Their opening product slate includes a $400 open back planar and a $100 MQA dongle amp/dac. The company describes itself as a joint British-American venture of established industry veterans, but the about page did not provide names. Something to keep an eye on:

I will give it that though it does look nice. Wonder if anyone will plan to take the plunge on these and write up some thoughts?

My recommendation to Helm is do not send a review sample to Zeos unless you’re prepared to get Andover-ed.

Not gonna lie, that gave me a pretty hard chuckle. You either get andover-ed, omg this needs a nuclear power plant to sound great, or maybe another video of him taking a shot of liquor while doing a review lmfao 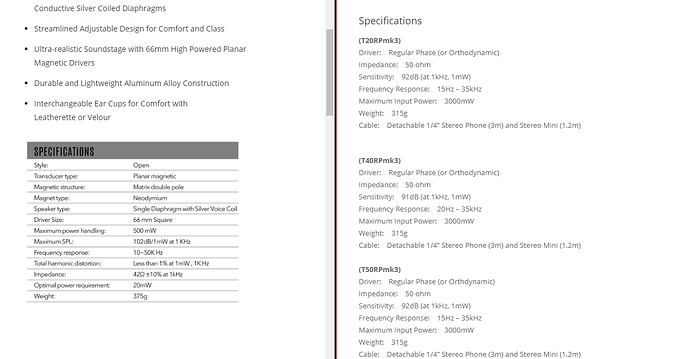 If it’s a square of 66mm side length, it’s bigger than the T50 or Andover drivers, but significantly smaller than drivers in Audeze, Hifiman, Sendy, or Monolith. I’m curious what the higher sensitivity will mean for sound quality. It’s true that many planars do not have high sensitivity. So what did they do to this driver and/or enclosure to turn this into a sensitive headphone and how will that affect the sound? I’ll be watching for that.

Can’t find any details about the detachable cable. Wonder if it’s 3.5mm and could take the V-Moda BoomPro…

distinct lack of info. everything is said to be descriptive yet non-defining.

https://www.youtube.com/watch?v=SuJplESgK10 like no information yet coming out soon. Though cable looks… like a 3.5mm? also has apparently an inline amplifier cable

it’s coming into a crowded market space, so it better have something to make it stand out from the crowd.

That “Inline Amp” was offered by Drop a few months back.

You can see the prototype headphone in the image carousel.

Yep, as @FBizzle just said I think that ‘in-line amp’ is a separate product. Unless I misunderstood something it will be sold separately from the headphones, although a bundle option is certainly possible. Still seems the in-line amp will be limited by the quality of the DAC in the phone(s) it’s likely to be plugged into.

Will be interesting to see when it all finally comes out. Though I won’t hold my breath. $400 gives it quite the competition for a small time company just making a headphone out of nowhere. An inline amp though sounds fairly interesting.

This looks like a really well made product. Their designs all seem to have a lot of care put into aesthetics. If the sound delivers these might be an interesting option. That is definitely a tough bracket to jump into though. Lots of well established competition with a lot of fans. But the good news for them is if a few people like it, then word will spread fast too.

is if a few people like it, then word will spread fast too.

If it sounds good and they can hit some good publicity especially with streamers it could spark a lot of profit. I think it’s worth keeping an eye on just incase.