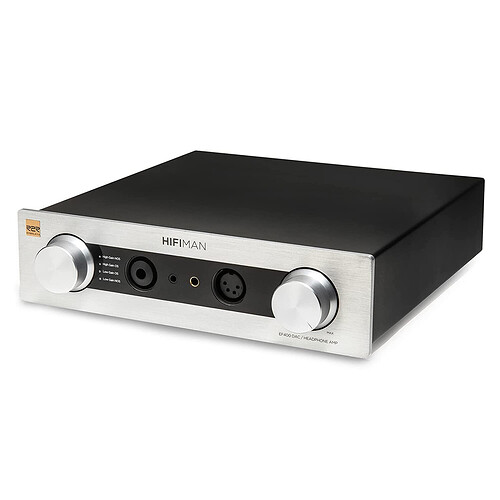 Hifiman’s new DAC / Headphone Amp Combo EF400 is announced. MSRP is 599$. Well some people tried it at CanJam already but I just learned and was suprised there is no topic here. It has a R2R DAC inside and 4.4 Watts of Power (at what ohm isn’t specified but in CanJam Video Jude says 36 Ohms)

Hifiman is marketing it as a companion to higher-end models including Susvara, though I doubt it. It looks like a direct competitor to Jotunheim 2 with a True Multibit card. If the DAC implementation inside is better it deserves attention. Lastly they are offering 100$ discount to orders with a Headphone or existing Hifiman Owners (Sundara or Higher bought from an Official/Authorized Dealer)

This is the link for more info.

Looks neat, wonder how it is. Yes it doesn’t really look like it’s aimed at the higher end hifiman, but it’s an interesting price point to hit if it sounds good. Also very interesting to see type c on a full size unit like that

Agreed. Also pre-order discount is tempting but we need more reviews to see IF it sounds good. If only you had heard it

I would have if I knew about it and if I were at canjam lol, wasn’t able to make it this year (and likely won’t go to the other ones either), but might pick one up once they are actually for sale and directly ship since I don’t like preordering anything to try. It’s a different enough product to be mildly interesting compared to some of the other dac amp combos released at this price in recent years. Hifiman look more interested in trying to offer more competitive source gear as of late so hopefully this competes well for the money

Color me intrigued. Especially with $100 off.
Please, someone give impressions!
They made this more affordable than I anticipated, despite the warning.

is it true r2r or multibit?

Looking forward to this box hitting the review circuit.
Interesting build. I appreciate how it has XLR, 4.4mm, 3.5mm, 1/4 inch jacks. RIP to adapters.

Well, I went and ordered the newly announced Yulong Da-art Aurora since I got a decent deal in the 328 sale. Although it is not a popular brand and no reviews/impressions so far, I am pretty hopeful because of the earlier products.

So any thoughts? Currently there is $100 off for loyal customers deal and that EF is looking mighty nice not sure what other fully balanced AIO is available close to that price point.

If anyone needs a coupon and doesn’t have any sundara or higher hifimans…I have probably 13 eligible serial numbers I’ll never use lol.

So I tried the EF400 for a bit and ended up returning it.

It does have plenty of power. But my hardest driving headphones at the time were the HE6se V2 and the DT 880. It did fine with them. It had plenty of headroom. I wouldn’t suggest using IEMs with the unit… there wasn’t a lot of room to turn the volume knob before it got too loud. But I will say there wasn’t any channel imbalance and I didn’t hear any noise floor when using IEMs. The sound characteristic is neutral and the soundstage was decent to about average.

I did experience some issues with it though. It started generating pop/click noises. I reached out to there support and they told me at the time to just turn off the host (PC in my case) and the E400 and reboot and turn the unit back on. This did fix the issue temporarily but it did return and I had to restart it a few times. I didn’t feel it was worth keeping cause I was not sure if it was going to turn into a bigger issue down the line. Also a few other customers experience the same as well.

I reported this on the head-fi E400 Thread forum

got mine today super sick atm so not sure if I’ll spend time with it yet but impressions on build are fantastic, curious that the only cable they provide is a power cable you’d think a USB B or C would be easy enough to throw in considering it can use either

This should be an official thread. Gimme a few to create one and I’ll transfer these posts into it…

Measurements are up on l7audiolab.com for who are interested and they are weird. I guess every r2r is a little weird. But amp section really doesn’t put 4w power. Distortion kicks in very early in low impedance headphones. So susvara pairing is not likely as we suspected.

tempted to get that for the $200 email deal

yes…mine is on it’s way as we speak!