Regarding the DT-800 I also find myself sensitive to it’s treble in stock form. Not to get too off topic, but dekoni suede pads really transform the DT-800 into a much more usable headphone.

I’ve enjoyed my HiFIMAN 400 HE-400i for almost 5 years now.
Yes, they definitely benefit from the 100-150 hours burn-in that HifIMan suggest.
I have been fortunate to still be able to enjoy a Linn Sondek and Magneplanar 111b speakers.
I guess that’s why when hearing the HifiMan for the first time I could immediately identify with the magnetic strips.
Finally I had a pair of phones that I didn’t miss the openness and clarity of the Magneplanar speakers.
These days I mostly listen to Tidal via the UAPP App.
And yes, they most definitely need the Opus #11 that is tasked with the DAC/AMP responsibility.
I have also used LG Quad DAC for many years, and recently moving to the Wing the Opus#11 is now my favourite audio device, of course coupled to the HifiMan phones.
Tidal max HiRes and MQA are definitely a requirement and compares to my own flac recordings from the Linn of my vinyl collection.
Finally to conclude, I would appreciate any comments on a suitable DAC for the HifiMan as my faithful Opus #11 has a dreadful battery capacity now of only approx 2 hours.
Hope to hear some thought on this.
Thank you 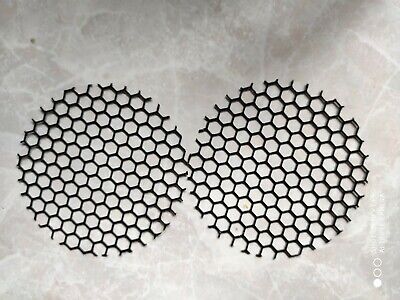 It's like a breath of fresh air for your headphones. Makes even Hifiman's entry level headphones look premium and expensive. Includes a set of 2 modded grilles. Headphone not included. HE400i/HE560 shown for reference.

Do yourself a favor. Everyone should have these on their he series cans.

general and sound:
both probably not bass head headphones but have great bass. it’s clean and thumpy but never bloated and blown up. i’m a musician and my headphone knowledge is limited so i go by how i experienced bass guitar in real life (gigs and rehearsal room) as a benchmark.
i like them both but i went with the HE400i because over longer periods of time they were more pleasant and less fatiguing without EQ. the HD 560s have a more flat/accurate tonality but they have some harshness to them, which became a factor when i turned up to really get immersed in the music. it’s not crazy noticable otherwise but in comparison it was a deciding factor.
i felt like due to the HE400i having this smoothness and clean almost liquidy character (planar sound? it’s my first) i could turn them up more without it being straining. that way the mids being slightly recessed in comparison wasn’t an issue. imho both are great headphones. both work great for gaming but the HE400i is the better alrounder for me. voices in podcasts (youtube mostly but also spotify) sound nicer to me on them for example. this could be be due to the HD 560s just being les forgiving. who knows…

so in terms of sound i don’t think one of them is better than the other. it’s more a matter of taste and use case. the HD 560s are designed for production so they might be better for that. could just be marketing mumbo jumbo though.

soundstage
again, just based on my limited knowledge and in layman terms. sound stage ingame (bfV) seems similar but HE400i seems more open. hard to say though if that is as simple as saying they have more. just with music the tonality plays probably a big factor. since the HD 560s are flatter they are also feeling denser and less airy. gaming still felt immersive. it’s just that airy sound can probably convey the feeling of space more. HD 560s never felt claustrophobic though. i enjoyed them for bfV. maybe some more seasoned people can say more on that.

comfort:
HD 560s gets more comfortable over time because their pads wear in and the clamp becomes less. nice and ergonomic. the HE400i are more comfortable on the ears but the headband (2020 version) needs adjustment after while for me because it only has contact to my head in a small area so i start feeling that. so i’d say comfort is overall equal but more balanced on the HD 560s.

EDIT:
EQ
also wanted to add that the HE400i seems to respond really well to EQ. the HD 560s did respond well to stuff i found online too but i didn’t go as indepth on it as the 400i. so i can not really make a real comparison. i just made 3 peak filters in APO EQ for the 400i and i can easily get different tunings without any noticable weirdness. so now i have a gain knob for subbass extention, mid attack (for hardrock and metal) and one for treble roll off. i don’t really use the treble one since i love the treble so far. i noticed though that the treble stayed remarkably clean when i boosted it way up.

Massively improved soundstage and noticeably sharper imaging. Sound wise its noticeably cleaner and more detailed. Also I’ve owned a pair of 400is for years now and the new he400se is so much better I’m blown away. I’ve been using them for the last 3 days exclusively for gaming and I gotta say they are absolutely fantastic with the honeycomb grills. They’re what I’m going to be recommending to people in the under $300 price range for gaming, maybe even higher. The thing is they are really good stock but not extremely good but opened up I would pick the he400se over my he6se for gaming. They really are that good. Detail is noticeably better than my he400i as well. The imaging is laser accurate.

do you know of anyone that made measurements before and after that change? would be interesting to look at. i only had my 400i a few days so i don’t feel like taking them apart yet

but i will keep this in mind. i’m a sucker for immersive sound stage.
would you say it recesses the mids more?

No the mids stay intact. Better separation but doesn’t really push the mids out at all really. It gives the bass better detail by a noticeable amount most of all, though the highs do get cleaner as well. You can pop the grills off really easy and listen for yourself, the honeycombs are just there for a little protection. Just pry the retaining ring slightly inward and it pops right out.

i can’t really tell, if they are different enough from default HE400i 2020

Those are the ones that come on them. These are the honeycombs. And this is how to remove the grills for yourself to test to see if you even want to do it.

hey another follow up question. so since i think i found my headphone with these i became a bit more confident opening them up. i tested with both grills off and A/B-ing holding them over the opening. i also tested with one grill on and one off. it was really just a quick test late night but i didn’t notice anything that jumped at me. more like i would need to really sit down and listen for a difference with the right material.

do you have any good reference tracks for testing soundstage or should i just test with games?

are these built different than the ones you own and are these somehow more closed on the inside (i have 400i 2020)?

maybe i was just expecting too much. either way i really love these and the way they present the music to me. no issue with sound stage whatsoever. but i’m still very curious, if i can get a second sound out of them easily.

tried the headband fix you suggested in the HE 400 SE thread. created an account to say thx. works like a charm. headband a is not an issue anymore 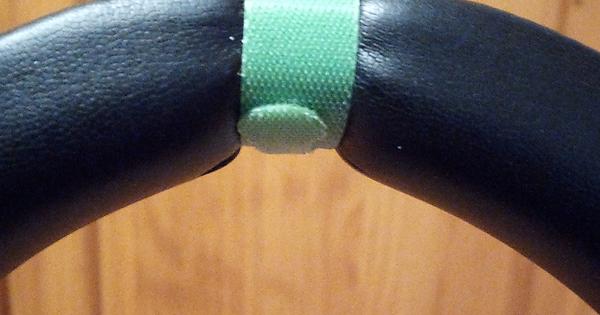 Anyone got good recommendations for a dac/amp/dap for the older model? Just picked up a pair yesterday. The cheaper, the better. I’m working on a tight budget.

no issue with sound stage whatsoever.

Same, except when I’ve recently listened to the KSC75 - those bastards have some of the best staging there is.

I’m gonna have to give this no-grille thing a shot too, if there’s any chance it will make them more KSC75-like.

actually i ended up removing the velcro strap because after a few days of it on the headband the foam seemed to permanently give in. so i don’t need it anymore…for now. similar to how some people put headphones over a bunch of books over night to reduce clamp faster.

that being said, i’m still thinking about ideas to mod the headband while keeping it fully intact. i was looking at some of beyerdynamics’ headbands. they have the stuff with the buttons bit also some with velcro. but i bet none of them fit around this headband.

@abm0 i was looking at those too. they look so dumb but i’m really tempted.

So has anyone tried pad swapping the 2020 version? I Like the stock sound but the small hole size annoys me >.>

this is how to remove the grills for yourself to test to see if you even want to do it.

Tested old 400i no-grilles, there’s not much difference and what there is isn’t necessarily for the better. With something close by for the highs to reflect off of I was normally hearing extreme-left and extreme-right sounds as very crisp and positioned close to the ear, in the cup or not far behind it. Without the grille, stage-edge sounds are more diffuse and less clearly positioned, which makes them feel farther away but in a vague, undefined way. This could create the impression that the stage is wider I guess, but it’s not in a way that I find attractive. Other than that, central sounds also lose some crispness and that’s about it. So this seems mostly detrimental to the imaging for me. I do not prefer them like this vs. stock.

That grille variant might improve things, but no-grille I would say is not better.

Yeah it’s definitely not a massive improvement on all hifimans but the he6se and he400se respond extremely well to it. The 400i it’s kinda picky and I found putting the mesh from the stock grills on the honeycombs for a little dampening. @abm0

what i can say about the grill vs no grill thing is that IMHO it removes a certain degree of dampening of outside world sounds. this indeed makes things sound slightly more open because the music is less removed from what happens around you. i don’t really know the exact definition of sound stage but i personally thought it was how wide/deep/high the image is. i didn’t feel like any of that changed. when i snapped my fingers next to the earcup it just sounded less dampened on the side without grill.

so i guess it’s a bit of a game of semantics. i definately noticed a very small difference after not looking for sound stage size anymore.

i could imagine earpad shape and size having a real impact though.

So I finally found pads that don’t ruin the soundstage/imaging (i think they improve it actually), I don’t think they mess that much with the sound either, but I still ended up putting one layer of toilet paper below and now these went from “I can’t really wear them for more than 20 minutes” to probably my most comfortable headphones, sound is better too (but that might be more the paper, hard to ab cause pad swapping these is hell) 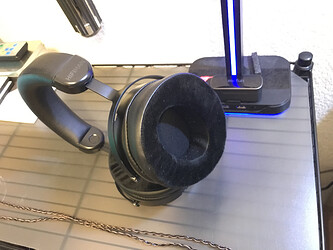 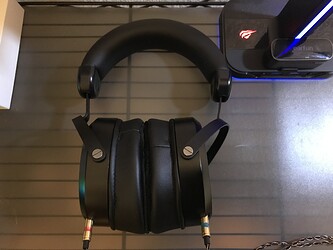 Also they don’t include the rings, you gotta order those from somewhere else*

Does anyone know if there’s any buying option for the 2020 ver. from new in UK for these? Amazon UK’s HIFIMAN shop seems to stop selling these and their official site doesn’t ship to UK it seems.