This is the official thread for the HifiMan HE-400i. This thread is for discussion and reviews. Do these benefit from a balanced amp?

In my experience not really. I compared them with my HD6xx on SMSL-SH8 and I hardly notice any benefits of balanced output on them, while HD6xx get more bass and bigger soundstage. Although He400i could benefit from better cable than the retail one.

Build quality on these is terrible, idk if its better to get the 400i or the Massdrop version 4XX. I have the 400i and after a couple months of use it is already falling apart, the pads alone lasted like 1 month lol. A better buy at the price point would be 58x jubilee/6XX. If you really want a planar get the Argons. These headphones all have different sound signatures though so it’s up to you.

Unfortunately, you probably got the newer yoke models which are known to break down rather easily. The old iteration of this headphone had a fantastic build despite being a little eccentric looking. The model that I frequently demo at my local Audio Advice has been through hundreds (if not thousands) of hands and is still holding up just as good as when I first saw it. It’s undoubtedly one of the earlier models.

@ELACaster they definitely benefit from an amp but no I didn’t notice much improvement going balanced.

HE-400i SE appears to have improved build somewhat compared to previous versions. They now also come with 3.5mm connectors instead of 2.5mm and the clamp feels like it has been relaxed slightly.

I mean it’s still Hifiman so no promises on quality but I’ve not had any issues with my current pair.

I have the 2.5mm version bought at a discount off eBay and still no problems. Could be due to them being my critical listening cans, therefore the least used and always babied when I get my hands on them, but I’m not seeing any sign whatsoever that they might break or anything - not the yoke, not the pads, and definitely not that damned stiff cable.

I have the older version of these and the build is holding together well. The pads are starting to wear, more so than any other headphone I have with the same usage and will need to be changed. The cable is also stiff and terminates in a right angle connector but other than that the sound is good and these are a very nice entry to planars. There are other planars with more bass or more detail but these are comfortable and allow you to forget your wearing anything on your head, while still allowing the music to be enjoyable.

Iv owned a pair of 400i’s since 2016, I had pads deteriorate and cable break just after a year but hifi man sent me a box with 6 pairs of new pads and sent a new cable. It took a while for me to receive this but im also in New Zealand and lomg shipping times are to be expected.

Trying something new with different drivers could end up being pretty cool. My only concern is the open-backness of them. Living in a fairly noisy place might end up muddling the sound for me.

They do leak a fair bit and let in sound pretty well, so pretty open

So I can imagine the background noise from living in a fairly noisy place would end up hurting the sound quality?

Not necessarily hurting the quality, but it would be distracting. You might not be able to hear some detail because of loud background noise unless you crank it

If that’s the case I’ll probably like the other closed back headphones I’ve been looking at more considering their isolation, but it wouldn’t hurt trying these out first to see if it’ll make an actual difference for me.

Blowviating mid and upper bass make up for the mostly missing low bass. Not a real disciplined can, but it makes a lot of noise in the mids and treble. Cables didn’t really do much, what does is a dose of anti vibration material on the back side of the can along the outer edge under the screen. Sorbothane is the best but better a mix of 'sorb and dynamat - eats up a lot of the reverberent and non-musical bass cruft. Leave off the screens for a bit more relief from reverb and a slightly wider soundstage.

Just did a review of the HE4xx here:

Hifiman 4xx 7.5 Another headphone i’ve heard a lot about and is recommended to new people. People keep saying what a good deal this was at $169 but now it’s priced at $130. This headphone is often compared to the HE400i. But has the build of the HE400. The only other planar that comes close to this headphone at this price would be the t50rp. [20200203_103935] SOUND Slightly V shaped signature, warm. Bass is good. Mids are present and good. Treble is good but a little sibilant. Detail is fin…

Those don’t look like the pali pads, it honestly looks like a drop but not drop version lol, I wonder if there will be any driver tweaks

Hey, has anybody some informations about the new 2020 revision of the 400i using what seams like the Deva headband?
Did they change anything else? 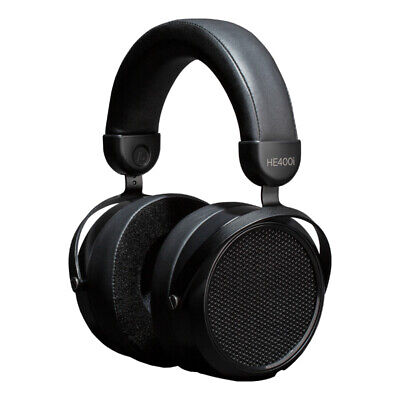 Find many great new & used options and get the best deals for HIFIMAN HE400i 2020 Ver. Over-Ear Planar Magnetic Hi-fi Stereo Headphone-Black at the best online prices at eBay! Free shipping for many products!

That’s funny, I was going to post the new 400i a couple days ago.

Hey, has anybody some informations about the new 2020 revision of the 400i

I haven’t heard from anyone who has used it but Hifiman is claiming everything is the same except the appearance. Drivers are supposed to be 100% identical but they said the same back when the first revision of the 400i and 560 happened and they removed the back plate on the drivers which had a slight change to the sound. I have a sneaking suspicion that the new 400i is using the Deva drivers but it’s only a suspicion because that is the one question the Hifiman rep avoided to answer.