how did you do that? can you share pictures or describe the progress? I might want to do what you did too.

Hi I’ll open them back up. I also got rid of the interconnecting wire as I’d rather use my own balanced cable.

I wanted plastic to become dense just like when I built sound systems in vehicles which was a career.

The added weight is worth it. Bending the extensions to head was another 10 minute adjustment. 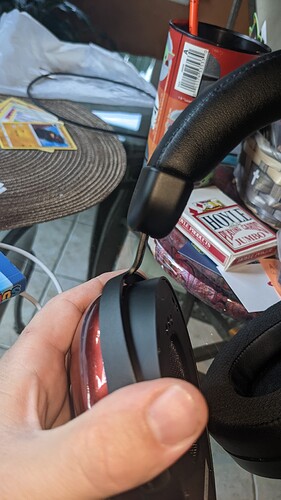 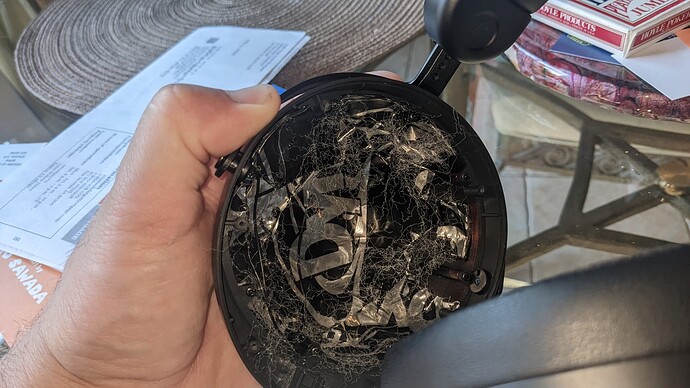 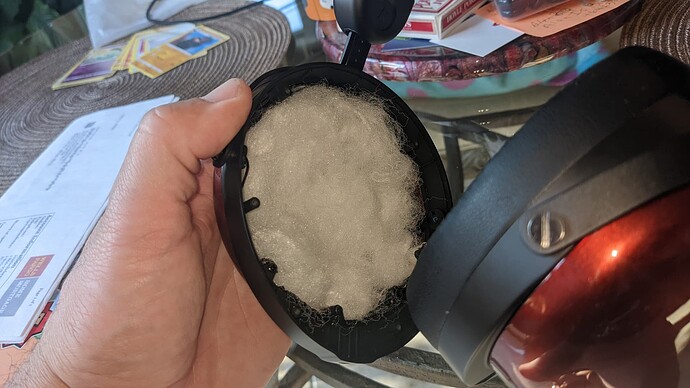 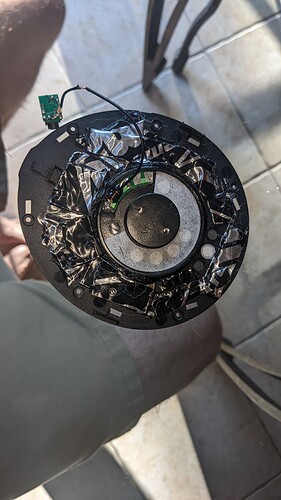 PXL_20220801_2235211262268×4032 560 KB
I did not care about looks of Dynamat. Only cared about Extreme over vinyl because the stuff I use is asphalt based so it slows down resonant frequency of the plastic plus it keeps more energy inside. Any improvement to mids and highs will be the same. The baffle is dense and helps reduce vibration of speaker moving.

Ports are not covered but could experiment with using tape. The part that slides up and down was adjust till the seal was equal. If one side has better seal than bass sounds louder on that side. You don’t need to bend the extensions.

With the giant cavity you can go crazy with different materials. 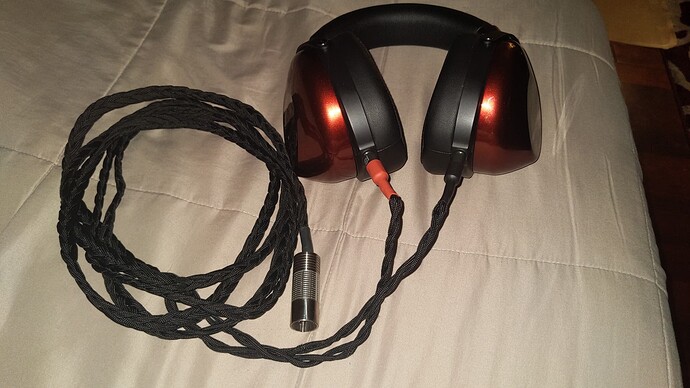 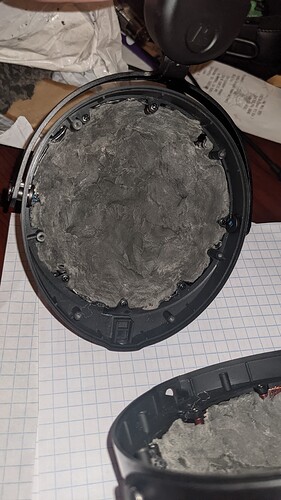 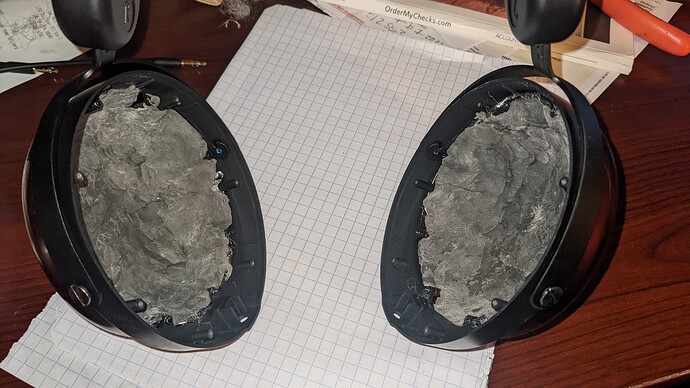 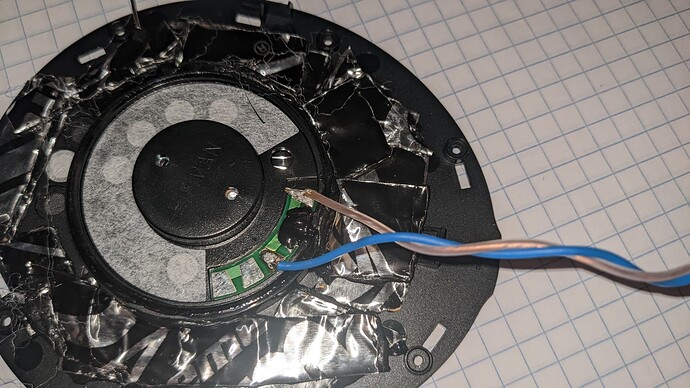 Used Mogami wire measured and resistance is 31.9 ohms at rest on both drivers after wire install.

Does it give them a lot more isolation?
How does the bass change? Thicker? Duller? Less sharp?

The Dynamat Extreme and duct seal made the cups rock hard. If you ever heard bass against concrete that’s how it sounds. Detail may have improved. I can say it’s clean and non fatiguing for me. Voices sound amazing and very focused. Sparkles and sweetness.

I use Schiit Lokius for more bass. Does not have TH900 bass out of the box. The TH900 is bass head can without equalization.

Last thing to do is remove some of the weight as looking down makes them fall.

The XM5 have a new form factor and folding/arm extension mechanism…they don’t pack as small as the XM4, but they are slightly more comfortable and smoothly adjustable without any click stops. https://eldfall-chronicles.com/
What is otc?
Sonically, the sound stage seems a bit more spacious. The bass is even better, it is still impressively strong and pleasing for bass heads but it seems better textured and more separated from mids and trebles.

Listened to these for a day and man, they do just about everything wrong.

Upper mids to lower treble sound like a rear naked choke. I’m no stranger to darker presentations, but I haven’t had a headphone leave me grasping for air as much as this one before, so that’s unique I guess. But worse yet, is that even through that veil you can still make out grainyness in the upper registers.

Then the bass comes through like a bargain bin bazooka subwoofer and you’re left wondering what the point of it all is. It’s a slow, undefined, kind of textureless dirty bass.

Everything else that’s been said about build/isolation is true too. They more or less
only slightly muffle outside noise. I would say they’re better at cancelling any sparkle and joy from your music than they are at canceling out incoming noise.

I just finished a full week with these and I am really pleased. I find them great for new rock, old rock, pop and blues. If there is any bass in the song, they bring it out. Vocals come across pretty well and separation is pretty decent.
On the downside, not great for horn jazz and feels pretty closed in. Some closed backs sound more open and some don’t. The Cascades sound much more open this morning. Surprisingly, they sound less bassy than the R9’s, which is wild to me.

So I just got these a few days ago along with the Bluemini R2R dongle and they sound fantastic, but aren’t without issues.

To start with the good, when run through my Dragonfly Red or even just the headphone jack of my MacBook Air, the overall sound is SO MUCH FUN. The bass is nothing short of incredible. It’s enveloping, deep, and just mind-bogglingly massive with surprisingly good detail (Black Velvet covered by Infected Mushroom blew my mind, holy crap!). As others have said, it’s also not really boomy and takes a step back with songs that don’t summon it. The rest of the sound is overall towards the darker and warmer tonality, with a bit of a dip around the upper mids/lower treble I think. Personally, I didn’t find anything to be lacking tho, and there’s plenty of detail throughout the range. Dynamics are also great, and these definitely shine with modern pop and EDM. The headphones are also real comfy, though a bit warm when compared to my AKG-712s (though those are open-backed ofc).

Next, I plugged in the dongle to test it with my phone (Sony Xperia 5 II).

My ears were greeted with a deafeningly loud voice and accompanied beep indicating the power was on and the dongle connected via bluetooth (I can hear it loud and clear from across my apartment). I assumed this was to do with my volume level, but it was nearly at the minimum setting. Well ok, that was weird, but then when I started to play a track the music was accompanied with some of the worst bluetooth static I’ve ever heard. You know that tiny hiss you can just about hear in pretty much any bluetooth device if you play something at a low volume? Well here it’s so loud that you can clearly hear it in quieter passages even when listening at reasonable volumes. It’s dead quiet when nothing is playing, but as soon as you play music, you get an unpleasant amount of static. Funnily enough, this doesn’t go away even when plugged in via USB-C. Another issue with the dongle is the volume adjustment. For some reason, it’s not linear at all and up to a point very little happens and all you hear is some low volume music with a metric ton of static. Then, when you go up another step, the volume jumps to an ok level, maybe juuuust a bit too low for my own taste. But if you go one step further, the volume jumps even more up to a totally unlistenable level.

I did some digging and though there seems to be little discussion concerning problems with the R9 and the Bluemini dongle, there’s a Deva Pro thread over on head-fi with a lot of similar complaints (different headphone, but same dongle). Now I don’t know if all of this could be fixed with a simple firmware update, but judging by how long these issues have existed, it seems like Hifiman isn’t that keen on addressing them.

Unfortunately, since the price of the headphones + the dongle was about $200 more than without the dongle and the dongle ended up being pretty much utterly useless, I’ll probably end up returning these. I’m kinda whacking myself on the head over choosing the bluetooth version instead of the regular one now, but I figured that the added functionality would be worth the price. Oh well…

I think HiFiMan have generally fixed their QC issues with Headphones but DAC/Amp QC is still shit.

I have/had their Sundara (2020), Edition XS and never faced any issues. With their EF400 though, there have been some issues…

Yeah, that’s my feeling as well. Didn’t encounter any bad words about the dongle before buying it as I did my research about the R9, not the Deva Pro.

I actually asked customer service about the dongle issue and they advised me to download the ‘DEVA’ firmware from their web page, which specifically warns NOT to install this to the newer Bluemini dongle. Funny thing is that it wouldn’t even help people with the old Bluemini, as the .rar file they provide is corrupted, lol.

ffs, get your shit together Hifiman

Looks like there indeed is no fix for the Bluemini issues, Hifiman customer service finally confirmed that. So that gives me two options: either return the whole shebang and ask for a refund or take a chance with a replacement Bluemini. GUH.

In the meantime I’ve been using these for gaming and listening to some more music. I was playing Hell Let Loose on my PC and was once again blown away by the sound. These really are frickin’ cinematic and almost made me check my underwear when artillery rained upon our squad. Also as a side-note: I had no issues when it came to hearing/understanding my teammates over VOIP (except maybe during said artillery barrage). When I need voice chat I usually use a HyperX Cloud II, and they definitely aren’t the worst gaming headset, but yeeeeah these stomp all over them.

When it came to music, I listened to some orchestral movie soundtracks, most prominently the soundtrack for the LoTR trilogy. I had some reservations in terms of how these would sound since they are a bit dark and bass cannon-y, but the R9 had no issues in delivering enjoyment, once again. I’m used to listening to these tracks on my 712 pros and have never heard such a thunderous presentation of them. Shivers were delivered on multiple occasions (especially The Lighting of the Beacons from the RotK soundtrack, but then again who doesn’t get goosebumps from that

So my personal recommendation still stands: These are great fun, just stay the fuck away from the dongle.

How is compare vs denon 7200, elegia, Sundara closed??

This headset is underrated. I am testing it against Focal Elegia and Clear.
At the current price it’s a steal.

I’m starting to believe that reviews of certain places and people are just trying to generate buying trends. Fortunately, I will open my YouTube channel soon and I will be able to speak my truth.

Back to the topic. The headset is in the process of burning.
Some reviews say it lacks detail. False.
That his soundstage is mediocre. False.
That it has an excessive bass. False.
That their means are the weakest. False. 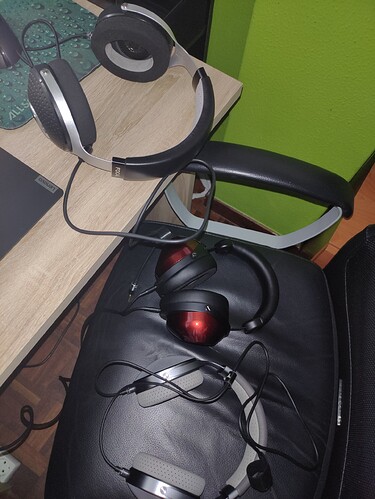