hello. trying to make sense of all this amazing advice and discussions. I am setting up a home theater and really want to get it right or as close as possible. I don’t want to waste money nor do I want to short the system if there is somewhere money needs to be spent. I have not purchased anything for the HT yet. Room is 15 feet wide by 20 feet long and 8 foot ceilings. 80% movies and gaming, 20% music. Primary viewing distance 10-11 feet. Prewired coming from the ceiling for LRC and 42 inches off the back wall for side and rear. Trying to keep things off the floor. This is a family home with kids/teenagers but is a somewhat dedicated room for movies/gaming/hanging out.
Would like to possibly add a 2nd sub (prewired) in rear of room some day.
Is it worth it to save money on the Left and Right and go with JBL Studio 530 ($290/pair Cyberweek)? 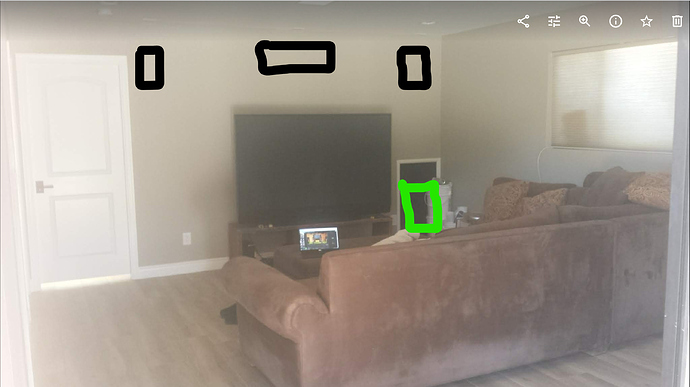 Split the SVS Ultra Surrounds into side and rear speakers. 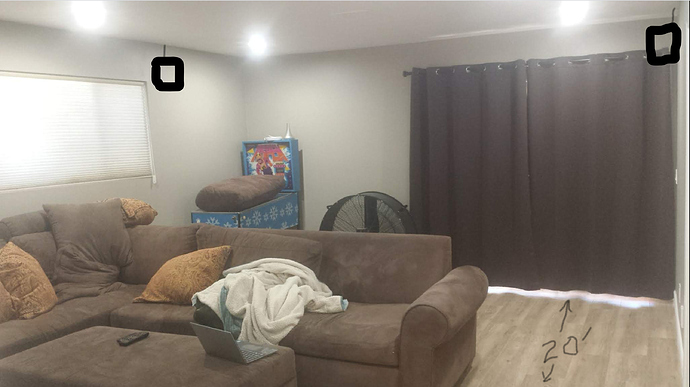 My room is similar. first, the LCR and surround channels have to come down to ear level seated otherwise it will screw up the sound field . The most ideal position for the center would be in the middle of the panel, but thats impossible so you will have settle with placing the center just above the display. Placing the center under the tv looks way too low, unless you raise the tv with a wall mount or taller tv cabinet. I suggest the former, wall mount the tv raise its position so the centerline of the screen is as close to being level with your eyes when seated from the middle of the sofa. Last thing about the center dont cheap out on it.
Get the SVS ultra center. Also what do you plan on running 5.1 7.1 9.1 11.1, you doing atmos?
Watch:
and welcome aboard ! 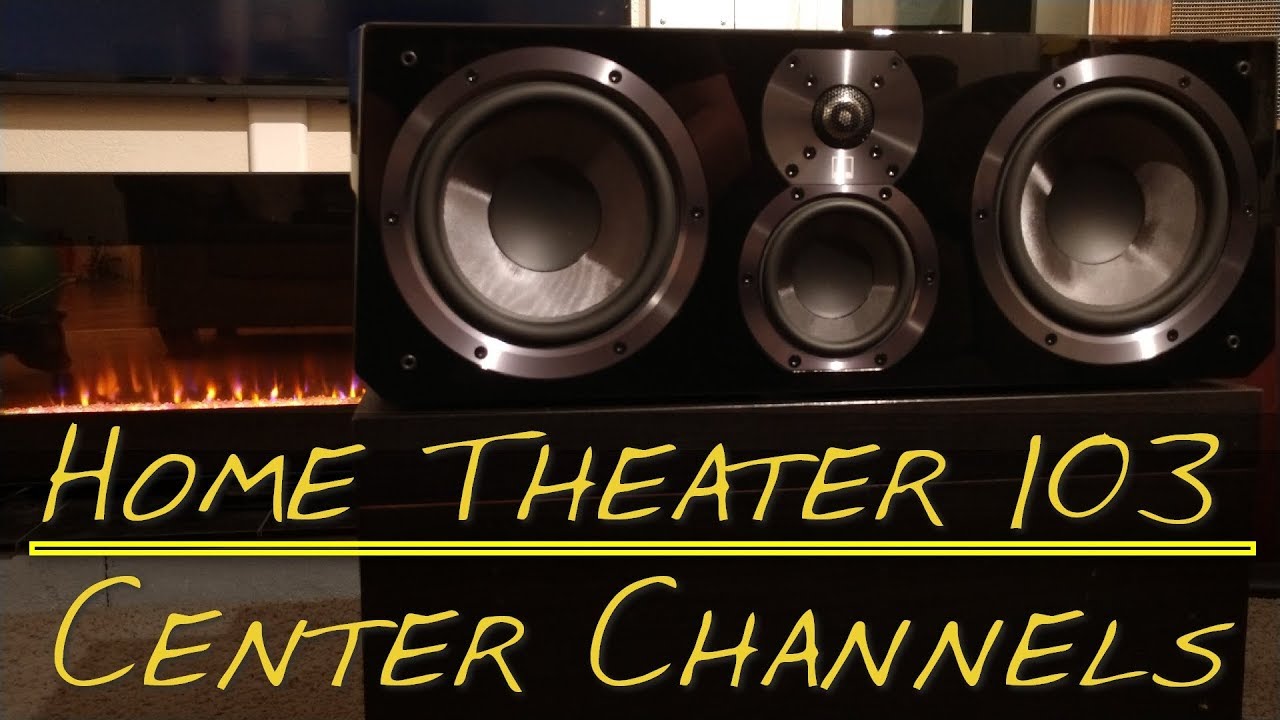 If its a 4k display that might be kinda far.

first, thank you for your replies and input. I’m definitely new to setting up a HT. I am pretty sure I read somewhere 10-11’ for an 85" 4k was in the good range. The TV will be wall mounted just a little above eye level due to occasional seating behind the sofa on the same floor level. The TV in the photo is temporary (Mitsubishi DLP 73). Talking to the guys at SVS and splitting the SVS Ultra Surround into a Side and Rear speaker would give me a 7.1 system. I was not planning on Atmos at this time. Should I? Also, LCR was going to be wall mounted just above the TV and angled slightly down to point at the viewer. Opinion/thoughts on this? Thoughts on SVS Ultra Surround System with PB2000 Pro sub? Good choice? Overkill? better options out there?

Have you taken a look at the dolby website on speaker placement recommendation for surround? Start there, would be a waste of time and money mouting the bed layer that high on the wall.
with the additional info you gave i suggest buying the 4500 reciever which is 11ch 9ch driven thats gets you 7.2.4 Atmos. Spend on the SVS ultra center ch $699.00 and a set of 6in woofer SVS prime bookshelves 499.00 for L/C/R (3.1). temporarily setup your new system if you like what you hear, then go from there.

Edit: have you heard the SVS speaker line already ?

LCR was going to be wall mounted just above the TV and angled slightly down to point at the viewer. Opinion/thoughts on this?

Placing the main speakers (LRC) so high up will have a big effect on room acoustics and probably will not work well. End result ain’t the same as speakers being on floor level / listening level with furniture.
Since the roof line acoustics works kinda like a empty room or half empty room.
If you place your head near the roof line, specially near the corners and clap, you will hear echo sounds and reflections all over the place.

Since you mentioned: making it right. I would only use surround speakers near roof line, main speakers should be in listening level.

What’s the general rule of thumb out there? For me it’s not complicated, if I have to move my head, then the screen is too big! I know resolution has some determination simply based on pixel separation but as you go up in resolution now, even that rule will go out the window.

I liked your advise of eye level to the center of the screen. I hate the hanging the TV over the fireplace trend, so uncomfortable.

Can what you’re saying be compensated by angling the speakers down?

Probably not fully but at some degree, yes. It will help.
Depending on distances to listening position and what the actual angle will be, how hard it will point down and point away from “wall” or “roof”.
Short distance, hard “aim” away from wall’s would be better than longer distance and small angle. 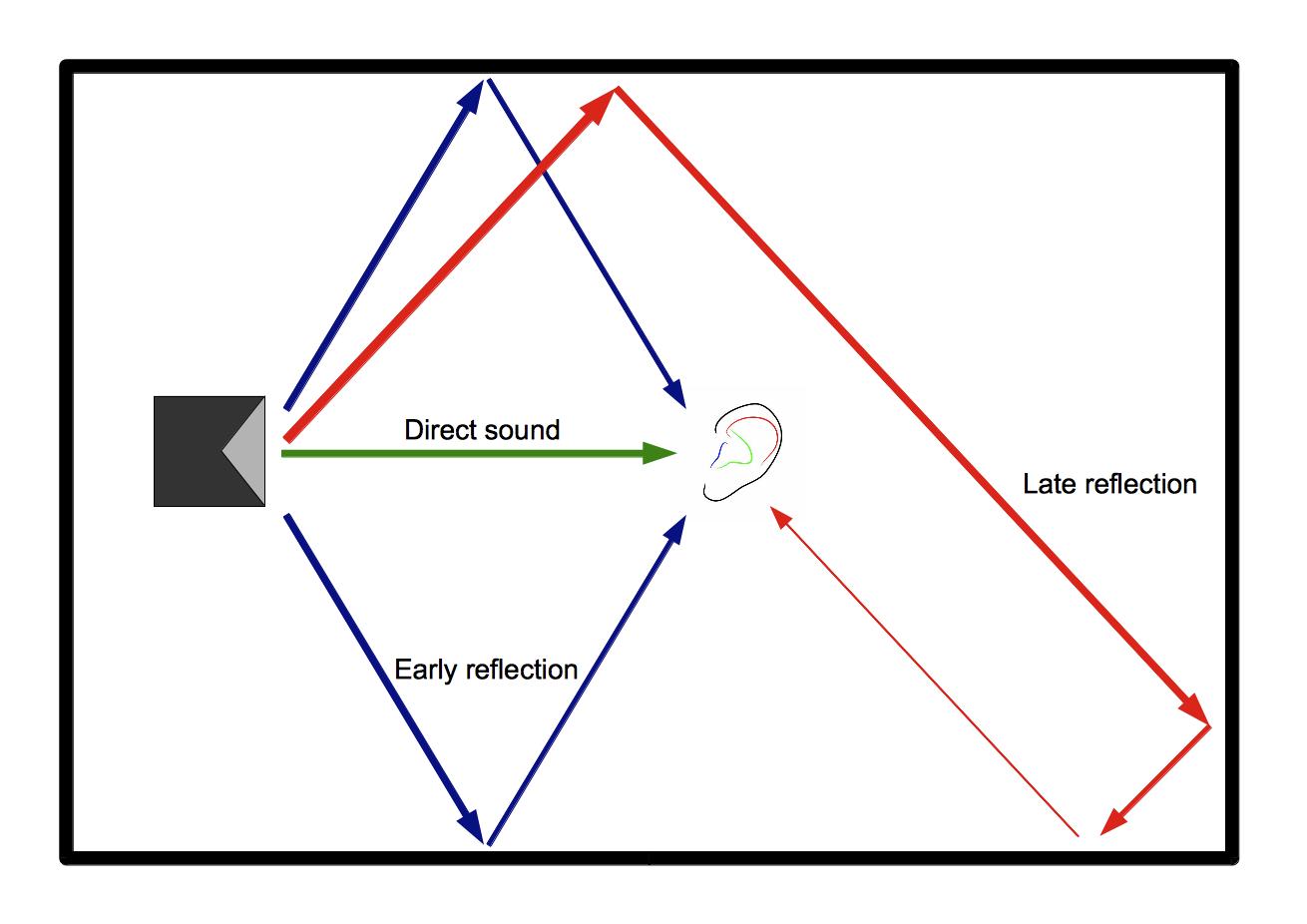 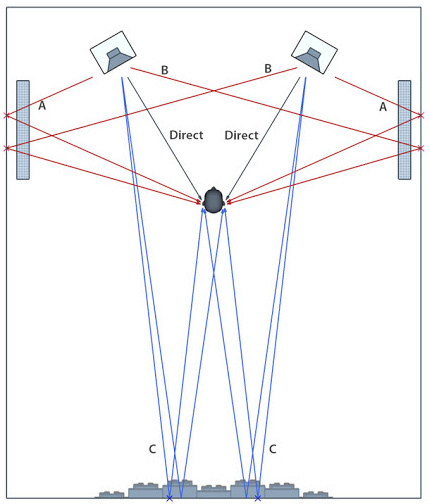 The speakers “front profile” or it’s (speaker elements) waveguide also play’s a some role.
If the speakers have zero or very little waveguide, early reflection will have large angle of degree, more easy to hit near walls. Let’s say like 90 degrees as a bad example.
If the speaker would have a deep angled waveguide, sound travels in more narrow angle again moving the reflections more away of walls. As for another bad example in 65 degrees.

There probably is more very complicated math involved and actual sound physics.
I just know the end result ain’t going to be as good as speakers being on listening level.

If you would have “empty room”, placing the speakers on floor + with a few bricks. Then stand up on, near listening position it will probably sound bit strange/odd. Principal kinda is the same, if they would be on roof and you sit on listening position.

Edit:
Almost forgot.
There is also a pretty important thing. Sound localization.
You will hear and notice everything coming and happening near the roof line, above you. You are watching directly to the screen and all the talk and action is coming from above.
Mentioned the speakers being on the floor. In that example you would hear the lead actor talking from the floor and every sound effect also would be coming from the floor while the action being on the screen/tv. It’s strange if being direct.

Think if you really want to get critical on picture quality the distance is like 6ft. Lol
Biggest panel i have is 65 and i get right up there at 6ft. might go blind in the next few years.

Made the mistake of going over eye level on one of the TV wallmounts in a front room for a 55 ,looks goofy as hell. Bugs me everytime i sit in there.

Think he should be fine at 11ft from a 85. He could always go back a foot.

I have not heard the SVS line. I have been trying to accumulate knowledge on forums and a lot of Zeos. I will go check out the Dolby website. So, SVS Ultra bookshelf are overkill in my setup? I believe it is a $300 saving dropping to the prime bookshelf from Ultras when purchased as a system package. At that point is it worth it?
at the dolby site now, Wow, a ton of good info.

you guys are great! thank you for the dialogue.

Not overkill but i dont want to suggest a $700 center and $500 bookshelves you havent heard before. I know SVS is popular and zeos approved. The idea is if the top of the line center sounds good to you with the less expensive model L/R, that $300 can go toward buying the rest of the speakers for a 7.1. If you dont like tone of the primes you can get the ultras and move those primes to the back channels.

To be even more caluclated order the ultra center and see if you like the sound. Mistakes and returns suck.

On the reciever the 3700 is the same price of the 4500. Heard the 4500 runs hot others said they give off heat no more then any of the other 2019 denons. Denons have a reputation for being portable heaters.

Sorry to jump into your SVS discussion

ha. no worries. didn’t mean for it to turn into an svs thread. just looking for good options for my room and uses. thanks I will check it out today.

have you considered in wall speakers? and as far as going above the tv, your fine. tweeter doesnt have to be at ear level for movies. have you had bad sound at a theater regardless of position? the answer is no. like 5% of the crowd have the tweeter at ear level, but all have tweeters pointed at them.

If you like the style and price is good to ya, the ultras will be fine.

Average theater height is somewhat more than average room height.
Main speakers are more in the center area of the big spaces.
Haven’t seen a single theater where the speakers would be near the sealing line.

Not including upper surround.
Plus they don’t have reflection surfaces near and all surround speakers are more or less positioned down, aiming the large seat row.

Place all that in a tiny room with close wall’s or roof… it will not sound nice.
There is also the sound localization side.

But i do agree with the in-wall idea. That is a good option with many benefits.