just as the title says. and I want to know people’s opinion’s on this. I see a lot of love and hate from the dt 990 from many people on the internet. while I do agree that this headphone is sharp I find it enjoyable and not unlistenable. strangely enough, I found the tin t3’s stock too sharp and had to buy comply tips with the foam filters to calm them down. and I’m not a fan of the m50x’s. My only idea as to why the 990 is so enjoyable to me is the elevated bass and space and somewhat air it provides due to it being an open back. or the fact that I’m running it off a liquid spark and that sort of rolls off the highs.

also if you wanna share how old are you and what frequency is your threshhold?

I’m mid-30s. I haven’t tested my upper hearing limit in awhile, but I can still tell immediately if an old CRT TV or computer monitor is on somewhere in the room. I also have a pair of 990s, the 32 ohm version because I only had a Fiio E10k at the time and the 990s were on a killer sale. My relationship with them is love-hate. Good bass, good spatial performance, lots of detail, and physically really comfortable. Also, their midrange is fantastic. Vocals are among most realistic I’ve heard in electronically reproduced vocals…until someone sings and s or t or ch. I like a bit brighter sound and really detailed treble in general, but the sibilance of these cans is a deal breaker for me. I’ve tried to EQ the 4-5KHz spike down, I’ve modded them with a handful of different damping materials over the driver, but that sharpness is persistent. It’s clear it’s a feature, not a bug. In fairness, when paired with an FX-Audio DAC-X6 the sibilance became tolerable and I enjoyed their overall sound at times. But higher performing amps like the Magni and Atom bring that sharpness out again. But hey, this whole hobby is about enjoying the music (although the gear is really fun too). If these cans help you do that, then enjoy the hell out of 'em.

I don’t think anyone here likes the M50x’s because the M40x’s exist.
Reasons why I absolutely despise all DT headphones:

I’m around 30, I have no clue what I can hear up to and don’t really care either.

I can still tell immediately if an old CRT TV or computer monitor is on somewhere in the room.

And this sound is just like the sound of my tinnitus, since forever. Heh.

About DT990s… Even I find them interesting, because they’re the least “treble-y” of the Beyerdynamics. 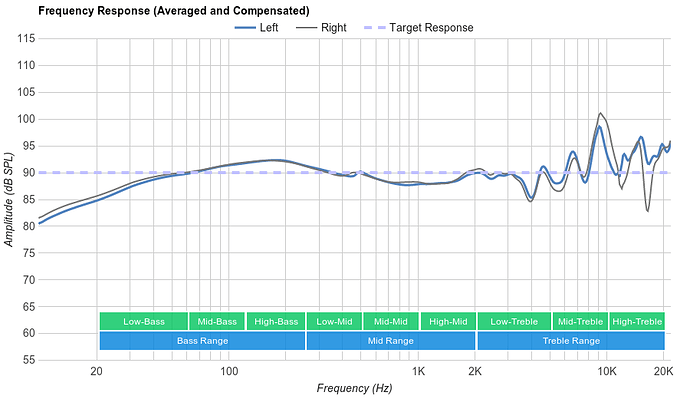 if you listen at a decent volume there’s no problem. If you crank the volume, you won’t hear up to 18khz after a while… A girl I know just bought BeatsX, and likes to listen to her music loud… This is way more dangerous than DT990s. 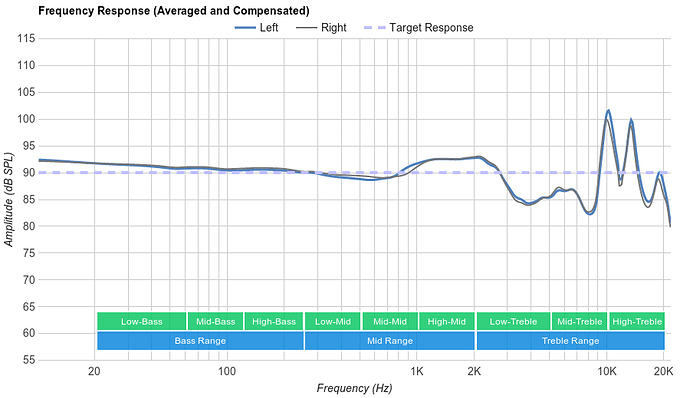 And this sound is just like the sound of my tinnitus, since forever. Heh.

I feel your pain on the tinnitus. Fortunately(?), mine is a bit lower frequency than CRT hiss, which is probably why I can hear it.

I mean, I seriously don’t care. I don’t know what life is without tinnitus. For like, 20 years or even more, I thought it was normal.

Oh and I found this, lol. Yeah, some people don’t like Beyerdynamics. 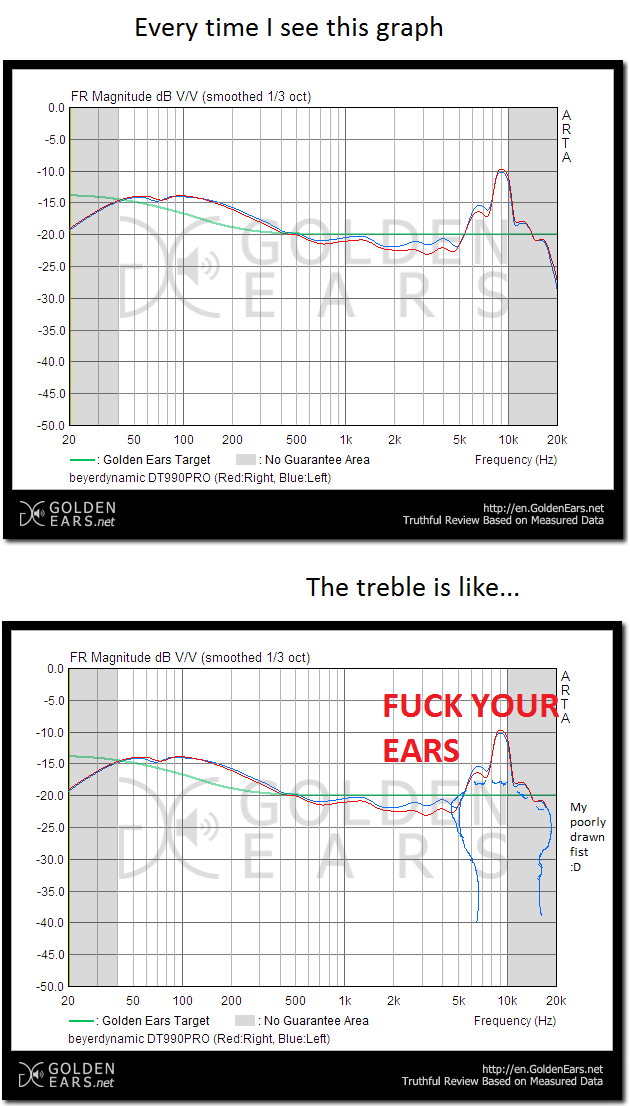 I don’t inderstand what you mean about points 5-6 the people that do like beyers like them for their top end detail and sharpness. the 1990 is notorious for micro detail retrieval, one of the aspests people like from the 770, 990 ,177x and even the 880 is the the bass . their is literally the term BEYER treble for the treble. tons of people especially in the audio game hate the 990 specifically. and for 12 I don’t think you should at all listen to those people they straight up can’t hear if thats truue and you do have a he 1 and if you do Im jealous. cause I would only get that if I had fuck you money.

I’ll add that 3 & 6 together don’t make any sense. How are they sharp and piercing yet have no treble?

Just by looking at the graph: He probably means no SUB bass, and no 2-to-9khz (probably because he finds its “hidden” by the 10khz peak). Or no “air” after 10khz for the same reason.

Sadly, a lot of headphones just have a 10khz peak instead of decent 10khz+ “air”, to “make people believe” they sound clear. Looking at headphone graphs, it’s apparently wayyy harder (or impossible even?) to have a flat line going from 10khz to 20khz+.

Seriously, there’s like 10 headphones in the world with neutral-ish, airy 10-to-20khz treble.

I don’t know it’s just seems to have a lot of salt around his comment too. With people comparing he 1 's to a headphone that cost 366 times less and saying it sounds better

I don’t have words for it but this is very similar to what I mean. This is all I hear from DT headphones, I’ve tried over 80 different pairs. Do not click it at high volume it can trigger tinnitus.

Honestly just sounds like your very treble sensitive.personally come to the conclusion that I’m not that’s why I enjoy the 990. But even people that claim to be treble sensitive do t mind the sound of the dt 880, the 1990 and even the t1 as the treble on those cans are a lot more controlled and less elevated than some of their other cans or the t9 or the 990

I’m actually not at all. I crank the treble up to 10db with most headphones I use with the EQ software I have.
I’m sensitive to coil whine. All I hear from them is this ear splitting I want to cut my ears off high pitched whine. This is over 80 pairs I’ve tried too.

What freq range do you eq up? I have stupid good hearing, and everyone on my mom’s side does as well, and I don’t mind the 880 or 770 at all, although the 990s can get on my nerves. I also wouldn’t say I’m treble sensitive either.

I find it strange that out of all the forums, Reddit posts, and reviews I’ve ever watched on any beyerdynamic your the only one that’s ever said anything about hearing this. It is possible that through past experiences your mind just makes noise once you hear it’s a beyerdynamic. Similar to when someone who is scared of msg eats Chinese food with msg all the sudden has symptoms when he hears the food he is eating has msg. When msg is harmless.

No, because I’ve used them in blind tests. They use a very very low quality solder that has it’s own unique hiss. When I changed out the solder for a pure silver one, they became so flat that no EQ could save them. I’ve tried a dozen types of solders including lead based ones, they all make it sound flat as a board to me.
As I said, I’m very sensitive to coil whine.
I never recommend them because the cable is pretty brittle and most people are way to rough with headphones.

They’re supposed to be studio monitors. Just headphones that can be tossed around, are cheaper then mastering or mixing headphones, used to monitor vocals or instruments. Their job is just to provide a neutral enough sound to pick up obvious flaws.

Edit: I’m not trying to push beyers, but they’re nowhere near as bad as you describe them for the average person. They’re a decent entry level purchase that will serve most people better than typical consumer or style cans. While I wouldn’t recommend them to someone with tinnitus or super sensitive to sibilance, they’re not a bad option