most of the tie the center channel speaker is for a home theatre setup…but it popped into my head as to whether it would enhance your music in any way.

I think this is a good question. I like the idea. I have a weird setup in the bedroom where I am feeding an SMSL M200 optically from the TV and into my old Denon AVR-2808, configured for 2 channel use. I don’t have the physical space for a center but I’m cheating, using the TV’s speaker output like a center! I simply adjust it to taste. And I like it. It provides an additional fill to the sound signature.

Of course, TV/video is the main use case, but I listen to AMHD a lot there as well (I use my cell and connect to the M200 over Bluetooth), and it is great. But if I could have a center there for the music, I think it would be even better. The 2808 will do that easily. I just need to figure out how to fit one in there.

If someone is using fully 2-speaker stereo setup or 2.1 system setup.
There is no real benefit from adding a center speaker as in 3.1.

Plus if the music is not recorded in surround format. Still no benefit.

Using stereo music from AV-amp with 3.1 speaker.
You would get a combined/mixed L+R from the center channel so. It’s not as good as true stereo.
It will be little louder since one more speaker = more noise or sound.
Works just fine on trance, edm, tehcno and so on Plenty of noise.

When using and playing surround music, source device understands the media its surround. Amp knows is surround material.
Then you will get little nicer sound stage with true stereo.
BUT the speakers should be equal also. 3 very similar speakers or 3 equal speakers so the stage sound is optimal for the surround music. Moving left and right and so on. Depends of the music.
Still is it worth the effort… is another thing.

Yeah, I got to thinking about it and the argument is valid. In my case with the 2808, the minute I add the center I would be switching over to the surround configuration anyway. Still, I think in some rooms a nice 3.1 deployment could work well.

Now that ATMOS is being supported by amazon and apple would imagine getting some of the atmos mix is better than none. Heard on a sound engineering podcast a panel of 5 mixers dont really like the center channel for music the vocal is too discrete most preferred spreading the mix between the LCR.

Im not entirely sure how it works. But mixing in atmos on apple pro tools there is a fixed 7.1.2 mix bus in the “box” so its 10ch L/C/R speakers L/surround R/surround L/rear R/rear top/L top/R and Sub/LFE. “Bed” channels, you then have to import the mixed from pro tools in the dolby software.

In order to move sounds around in the atmos renderer the sound gets assigned as a object that can be moved around within the renderer. The dolby software is not limited to a base 7.1.2 ch as in the pro-tools mixing sofware, i Think.

Talking out my ass, need to watch more videos to get how atmos is mixed. 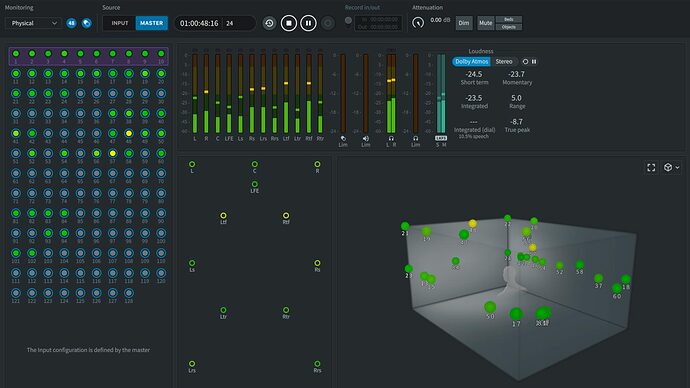 Listening to atmos music since it came out on apple, surround music is a different animal from surround movie. Sound is coming out way more from all the channels than movie mixes.

“The intial question is a center channel good for music.” It might be now that music is being produce specifically for surround and not stereo.

Hello,
I almost don’t think it would be better.
If I hear the instruments on the left and right and the voice from the centre speaker, it could be irritating.
But one would get used to it.
In the end I would also say that if they are reasonable speakers it could be okay.
What would be bad is if they were cola speakers, that would certainly not be good.

You’d have to try it out and let your ears decide. I think if the centre speaker is well dosed and it fits the room, it can be good.

You might also have to work a little on the room correction so that the centre speaker tends to be set more forward than the left and right.
In order to get the right amount of sound from the front.

The second hurdle would be that there is no stereo amplifier where you can increase the gain in the centre speaker.
Since we only have bass, treble and balance.
Spontaneously, you would probably have to work with an equaliser.

With an av reciever, the function would probably be available, but it should not necessarily be suitable for music.
Since the Av Recievers have 5.1 minimum 2.1.

Honestly, however, you have raised a good point, which is an interesting approach.

Assuming your using a AVR, right ?

Im surprised no-one has mentioned phase cancellation issues with a 3.1 or higher setup. Even 2.1 and alot of single 2 way speakers have some element of phase issues.

I mean if you know what your doing and are planning a treated room with the incorporation of 3.1 / 5.1 / 7.1 then yea you can reduce these issues, but most of us doing this in a living room or similar is total overkill I feel and especially for music you will not improve the sound. Only create more potential issues.

i think it’s important to mention that 99.9999% of songs ever made are recorded in 2 channel and deviating from that is going to complicate things in a lot of ways and though DSP properly configured can completely solve that, it IS going to be REQUIRED to make a 3.1 system even moderately feasible. can a non DSP configured 3.1 system sound good? sure, but is it going to ever sound as good as a properly configured 2.1? no. but a DSP corrected 3.1 can be pretty incredible in it’s own right. without DSP, something as simple as panning is going to be pathetically problematic.

Unless the sound engineers are lying on their podcasts amazon and apple are backing multichannel for whatever reason, money to burn i guess. big name artist they work with once hear ATMOS in a full setup want their stuff mixed in surround. The engineers prefer mixing for atmos because its a superior format over stereo but want to be paid more because they now have to provide a stereo mix a headphone mix and a atmos mix at no additional charge.

The sound engineers are reporting the problem mixing catalog titles, however new stuff is being mixed for atmos. Although a song is mixed for mutilchannel it folds down to whatever format you have, all the way down to stereo.

And the benefit of a surround mix is the dynamic range is there, you cant brick wall a atmos mix.

Another thing audiophiles are not going to like the record companies are making their engineers remix their catalog for atmos because its a way to resale the catalog.

For the home theater crowd its an awesome time to be into audio.

Im sure Deadmau5 would beg to differ

He released an atmos track back in May, it’s bloody loud. Im sure if you analyzed the LUFS it would be the same as the stereo mix.

Apple and amazon will send work back to the mixer if they dont meet the -18db standard for atmos.

Its the wild west in audio but feedback from the big name engineers is the suits are checking work which is the total opposite since the invention of recording playback.

Theres a new war its not loudness a streaming war.

The sting for me is i cant get away with mixmatching speakers investing in a AVR with preouts for amps and cooling the whole mess a music mix is going to tax gear way more than a movie.

Im dumb, here you go. “3.1 good for music” ? it might be, say you want more than one listening position and using a AVR. 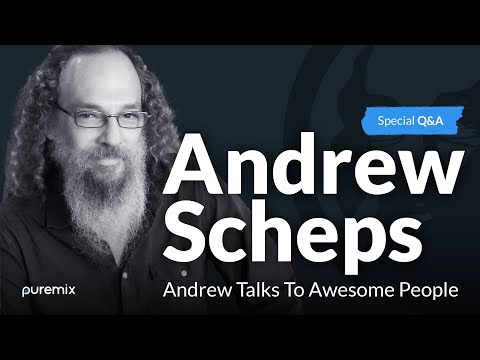 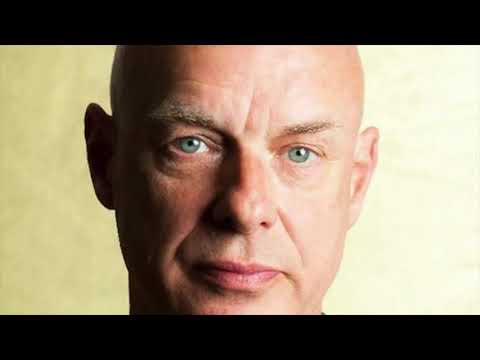 Intetesting, the preout for the center ch confuses me with only 1 rca output ch.

@M0N do you know anything about the halfer circuit?

The Hafler circuit is a passive electronics circuit with the aim of getting derived surround sound or ambiophony from regular stereo recordings without using costly electronics. Such circuits are generally known as matrix decoders. The Dynaquad system works using similar principles. Named after its early proponent audio engineer David Hafler, the circuit exploits the high amount of stereo separation between Left and Right channels and sound phase. This type of system is called 2:2:4, since the ...

where about in that video do they talk about a 3.1 setup?

yes it’s an interesting and potentially fun circuit, basically just sends out of phase material to rear channels, a sort of fake quadraphonic setup, personally I think it’s cool but not anything I’d want for serious listening, but can be worth giving it a try. also look at a dynaquad setup for another pseudo quadraphonic setup