Is it possible to take advantage of balanced 4 pin XLR amp output with SE cable adapter?

I have the DT 1990 Pro that uses a 3 pin mini XLR to connect to the headphones and has a single end. I need to take advantage of the higher wattage output from the balanced connection on my amp. Is this possible? Do I just use an adapter? I was considering Hart audio cables.

I noticed in some of Zeos’s reviews he has adapter cables to test balanced and SE output using a single ended headphone. So I’m guessing this is what I need to do?

I believe the 3 pin XLR is single ended too, one pin for the shared earth and left and right pins…Fully balanced needs two separate earth connections?

That sounds right. Since it’s not a balanced headphone. But it seems that the balanced output from the amp provides about 3 times more power. I’m just trying to understand if and how I can take advantage of that with single ended headphones.

I don’t think you can? unless you convert the 1990 to balanced but their goes your warranty

What am I looking at here then? From Hart audio cables:

I might be wrong but that wouldn’t be balanced at the headphone end, just lets you use a balanced only amp to drive a single end set?

In other words will using the adapters as shown in the images above, take advantage of the full power of the balanced XLR output from the amp? Or will the adapters themselves, converting to single ended, reduce the power by 1/3rd?

take advantage of the full power of the balanced XLR output from the amp? Or will the adapters themselves, converting to single ended, reduce the power by 1/3rd?

This would be my thought too.

and may cause a short and damage your amp.

Why would Hart audio offer this cable adapter then? I’ve also seen these adapters on Amazon. Are they used for something else like microphones or something? Confusing…

Drop James an email [email protected] with any questions regarding compatibility

I don’t own any Hart audio cables but the principles stand. You don’t mix two different signals in one cable, balanced = L+, L-, R+, L-. Single ended = L, R, Ground. So if you somehow use a single ended cable in a balanced output you will unite the R- and the L- in the ground channel, that will not likely affect the headphones but will likely affect the amp. It’s a no no. A few months ago I was also confused by this until I understood cables have nothing to do with processing the signal it is done in the amplifier with different channels. So I would recommend for you to get a single ended powerful amplifier like the Schiit Asgard 3, Smsl Sp200 or any other amp below 300 us/euros

Edit: Meaning the balanced interconnects are only meant to be used with balanced headphones.

going from a single ended headphone to a balanced output from a amp will damage the amp.

Just out of curiosity, how would that damage manifest through the amp’s performance? Would it completely short out the amp or would it still work, but with decreased performance and added noise? Maybe someone actually did this to this amp, then returned it.

Because I still feel like the Amazon seller that sent me this amp, intentionally gave me a returned/defective one. I asked for a return shortly after buying it, but instead they stuck a shipping label on it and just let it sit in their warehouse for a few days. When I received the box it looked like someone ripped it open in a hurry and some of the packaging was missing.

I just listened to the DT 177X Go again with some songs and I can hear it clipping when the music starts to get loud… But they are only 32 ohm. So it seems like the power being insufficient is not the issue for the clipping/distortion. It seems to be the amp itself?

It also had a HUGE amount of noise which was directly related to how much power my PC was using. This was using the RCA inputs. My Schiit Magni 3 had zero noise using the RCA inputs. I read a review on Apos audio which repeatedly mentioned that the SPSL SP200 had exceptionally low noise floor, etc., yet I experienced the exact opposite. So again I’m thinking, this is a defective amp ?

Not sure about your amp, but the best thing is to return it as defective if you can?..Get a set that can be run balanced from a balanced amp or get a single ended amp with a bit of

…An iFi Micro iDSD can drive most headphones and sensitive iem’s with zero background noise.

It’s hard to say how much damage there would be, but you would most likely hear it everything you played if it was still “operational”.

I have a SP200 and I’m feeding it signal with RCA cables and don’t notice any noise problems with it.

I have no way to test it, AFAIK you would need resistors between all of the pins to take up the difference in bias level from the amp.

I noticed in some of Zeos’s reviews he has adapter cables to test balanced and SE output using a single ended headphone. So I’m guessing this is what I need to do?

What you can do is build a “unbalanced to balanced” adapter. That ONLY is to be used from an unbalanced out to a balanced headphone. 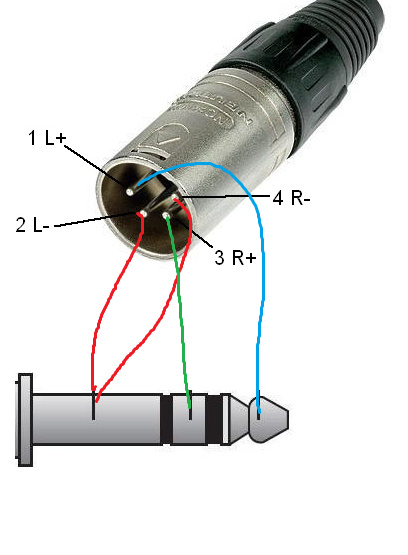 In a blanced signal, one signal is the inverse (or 180° shift) compared to the other. Both have the same voltage to ground, and double that to each other

When the unbalanced output is more of an afterthought, then just one of the signals is fed out the front resulting in “half” the voltage. As Power is Volts times Amps, half the voltage results in half the power.

You can achieve the same power at out of single ended as you can out of balanced. Just have to do the engineering for it.

I’ve ordered some quality RCA cables, which I’ll use to test my Schiit Magni 3 with the DT 177X Go (since they’re only 32 ohm and would get a lot of power). That way I can test if I still get clipping at similar volume levels as the SMSL SP200. If I don’t then I’ll know for sure if the SMSL amp is defective.

They’re not adapters so much as interconnects that enable you to interchange the terminations while keeping the majority of the cable the same. You can use a single ended interconnect on a balanced headphone, but should not attempt to use a balanced interconnect on a headphone that is not capable of running balanced. As others have said, you run the risk of grounding issues that could cause a short and potential damage to headphone and/or amp.