Coming after some time of burn in… sound is even cleaner, soundstage (depth and width)/imaging/instrument séparation/details, etc, improved. These sound perfect.
Maybe they stop the production for Being too cheap, i don’t know. With the tempotec idsd plus, neutral dac, it is so good.
They are so much better than everything i have in the price range…absolute bargain.
I would have been curious to try the diamond as well

I heard they lost the supplier, a competitor outbid them or something like that. Glad I bought a set. I am also very happy with the set.

any idea with the competitor’s name?

No, sorry, I can’t find or remember where I read that, but it didn’t mention the name, just that they got outbid.

got my set today, listening only for minutes, i can tell: wonderful. Really, really pleasant tonality. Incredible bass. Enough soundstage. Suuuch a lovely presentation. Emotional, warm, human. Reminds me of dark chocolate… with just the right amount of sweetness and cream. Yummy.

I do have a mystery iem arriving on Monday with a Beryllium driver. I wonder if it’s similar to the believe. I’ll post pictures when it does.

I bought my Believe last February and I think it’s not that good. Before you bring out your pitchfork, hear me out.

So let’s get the good things out of the way. I think the timbre of the Believe is great. It sounds natural for the most part and it has a not so intimate, but not too far as well, vocal presentation. I think the Believe is even better listened at a high volume, but there’s a catch, and here comes the bad part.

When I got the Believe and tried it, I think there’s a problem in the treble region. I can’t really pin point the exact frequency range, but I know that there must be a nasty peak. That problem in the treble is like a double edged sword. It makes cymbals, hi-hats and other brassy instruments sounds sparkly, but I think it makes them too highlighted than the rest, to the point where it gets kinda ear piercing. At first I thought this problem is because of the lack of burning in, so I did that.

After the burn-in, I noticed a sound difference. The mid bass tightens up and the detail improves in the lower region, but nothing changes in the treble. I let the Believe run for more time, but there’s still no change. I tried tip rolling, but I don’t really find anything that fixes the treble problem. So, I left it sitting on my shelf collecting dust.

Last night, I saw BGGAR’s graph database and I found the graph for Believe, and boy oh boy here is the culprit. THAT 10K REGION PEAAAAK.

For a moment I thought I was too treble sensitive because literally no one mentions that treble problem, but apparently my suspicion was right, that 10k region is a problem. Because of that, I tried to add a -5.6dB in the 8 to 10k region and everything becomes much better for me.

So in conclusion, I think the Believe is an okay IEM. It’s really fun to listen to EDM, hip-hop and pop music. With a proper source, it can provide a tight and deep bass slam and a non-fatiguing listening experience (after EQ). The timbre is also a strong point for the Believe, but unfortunately it kinda suffers in sound separation and layering. I also think that it cannot properly render the subtle details of a classical or orchestral music. Since detail and layering is an important aspect for me, I’ll have to say that Believe is not the one for me, but I’ll still keep it tho. 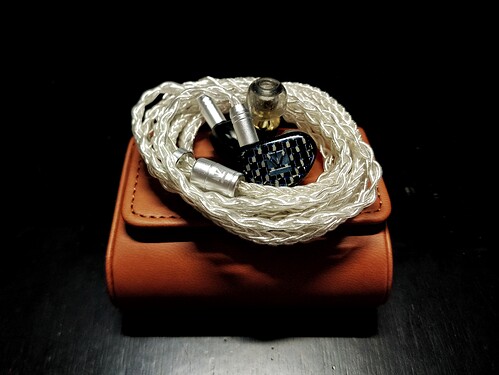 Edit: The cable is a KBEAR 8 core silver plated cable and it has a Xelastec tips