I currently own Sennheiser 58x and FiiO BTR5. The pair doesn’t stand out to me much, but it’s been getting the job done for some music (though it sounds a bit boring) and for some FPS gaming (the sound feels a bit light).

So I’m looking for an IEM that would bring up the energy a bit. I narrowed it down to the Thieaudio Legacy 3, Moondrop KXXX, and the FiiO FH3. I was wondering if anyone have had the chance to test and compare these, but some feedback for any one of them would be very helpful. I’m leaning more towards the KXXX since Starfields are very well known and highly praised everywhere I go, but I worry about the paint-chipping.

I think I would really like the Legacy 3’s sound as well, but I’ve read reviews that talked about the metallic highs (I’ve have trouble with V shapes before with the 770 Pros). And the design doesn’t speak out to me, even if it’s strictly for audio lol

I’ve never quite experienced soundstage and imaging (something I didn’t even know existed before I started looking into headphones a week ago) so I’d like to know how these IEM do with them. Again, I play FPS, so imaging would especially help a lot

FH3 for sure ! they are really good for gaming too ! and of course any genre of music

If you’d want the starfield but not actually the starfield, I believe the common way is to get the Aria, haven’t heard it myself hut it seems to be the starfield but a bit cheaper though not worse. Personally I didn’t like the starfields that much. They don’t do anything wrong but they never exicted me in any way. Haven’t tried the L3 so I can’t much comment on that one (wasn’t a fan of the L4 but I don’t know how they compare so not sure if it’s relevant).
Absolutely love the FH3. Bass is great, mids aren’t recessed, treble is not fatiguing for me, imaging and detail are amazing. They are also very comfortable to me. Get them with the Final Audio E tips for the best resultaten in terms of fit and sound IMO. Only thing I didn’t like was the cable, i got an aftermarket cable from AliExpress for about €10.

Thanks so much for the response!

Yeah, from my search I’ve noted how the Starfields are just a pair of inoffensive IEMs; it doesn’t seem to have the “wow” factor that I’m looking for.

Nice, the Fh3 sound great! Thanks for the detailed info

L3 has some pretty good energy. One was just posted on head-fi for $65. Pretty good deal at that price.

Chris just said in his review that he prefers it to the FH3 and it’s only 99 bucks. Thieaudio have been killing it lately, so I totally believe it. I’ll be able to hear it first hand later this week and share my personal reactions. I’m excited.

So I’m looking for an IEM that would bring up the energy a bit. I narrowed it down to the Thieaudio Legacy 3, Moondrop KXXX, and the FiiO FH3.

I own all the IEMs you’re asking about. I would personally rank them like this…

I’d buy the Aria before both the KXXX and Starfield.

He doesn’t seem to like the fh3 in general though, so I’m not sure whether him preferring it over the fh3 says too much. Still, sounds like a very interesting set.

If you’re willing to save up for a top class IEM, which we all seem to do eventually anyway, then I would highly recommend the Unique Melody Mest. Or, for something that gets you very far, ThieAudio Oracle or ThieAudio Clairvoyanace. I don’t own the Oracle but it is supposedly better tuned than its more expensive older brother, the Clairvoyanace.

After all that, Mest beat them all. Oh, and I got the original Mest for cheaper than the Mest MKII. I got a chance to try and deeply compare the original against the MKII, and I preferred the slightly higher treble of the original. The MKII fits better for most ears though. And, many people prefer the MKII since the slightly tamed treble gives it a smoother overall playback while retaining the same character that made the original great.

I don’t own the Oracle

I do and I prefer it to the Clairvoyance. I prefer the Monarch to the Oracle. It’s a middle ground between the Monarch and Clair (much more detailed than the Clair but without the Monarch bass shelf) all in a smaller shell. It is a winner for sure, just considerably more expensive than the IEMs being discussed. Just expect to wait at least a month and a half for it to be delivered.

Here’s a pic of all my Thieaudio tribrids. 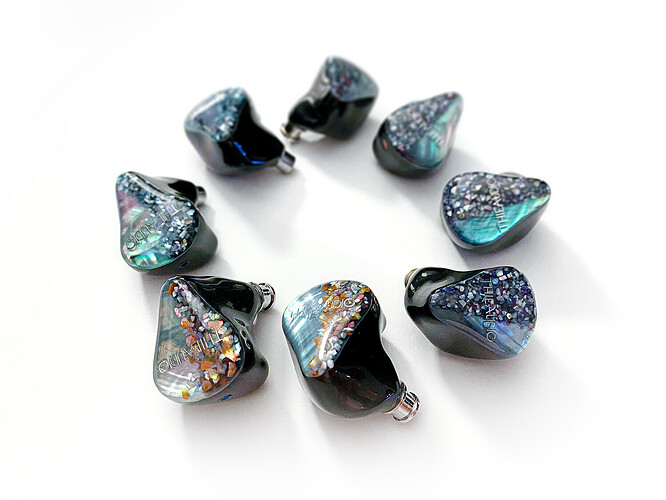 Interesting. So, BGGAR prefers the Oracle over the Clair and Monarch. It would seem like the Oracle would be an upgrade then for me over my Clair (and for less money → I could sell the Clair and keep the cheaper brother I could like more).

What would you say about my situation? Where does your experience suggest I could go for my own collection at this time? Which ones would work well together without being overly redundant?

Based on what I’ve heard from BGGAR so far, and your comments on Monarch’s nice bass and preference overall, I would see myself owning the Mest, Monarch, and Oracle…selling the Clair.

…though all of this may need rethinking if the new Xenns UP is something special!

I can add a vote to the FH3. They are my most expensive IEM (I have a budget lineup

)
And I fuckign love them! Easy to drive as well (for me they run off my apple dongle 95% o the time)

I can add a vote to the FH3. They are my most expensive IEM (I have a budget lineup

The FH3 is simply an incredible IEM at any price. I love it.

I kind of recommend going the other way. Try to find as many unique sound signatures and driver types for cheap and figure out what sound profile you like then look to refine it with the higher end ones.

Also your headphone preference and IEM preference can be vastly different. At least for me it is. I have a much lower tolerance for peaky treble in IEMs then in headphones, though there is a limit in headphones for me as well.

That’s where I started.
I now own on the cheap end:

and on the mid-range:

I kind of recommend going the other way. Try to find as many unique sound signatures and driver types for cheap and figure out what sound profile you like then look to refine it with the higher end ones.

I agree with this way of thinking but I’m afraid of 2 things:

To explain further on the first point: many entry-level iems tend to bleed from bass to miss. Listening these, I could think I don’t like bass that much when actually I just need a better bass/mid separation. Am I wrong?

You can most definitely get a really wide range of tastes in a cheap bunch of IEMs.

BL03 has a boomy bass but not much bleed at all
BL05 has a bit less bass but more of a ‘warmth’
ZS10 Pro’s are very vocal-forward. Especially female vocals like… mhhhh! If I wanna listen to any female vocalist I will whip these out over even my Sundara.
T2 is very boring. It will tell you if you like boring IEMs or not (I don’t xD)