I just received my ZDT Jr. a few days ago and wanted to create this thread to share experiences, headphone pairings, tube rolling etc.

I’m mostly using this amp with my ZMF Aeolus and although the tubes a not fully burned in yet I already prefer the ZDT Jr. over my THX AAA 789 for those headphones. The low end is stronger and everything sounds more musical and lively. I’ll post more details as soon as the tubes burn in and I’m more familiar with the sound signature.

I also already have some tubes to roll for the amp. All NOS tubes but for now I’m not sure which other tubes I should try first. I have 1 pair of Mullard ECC89 power tubes and for driver tubes I have Mullard M8100, Siemens 6AK5W, Telefunken 6AK5W and GE JAN 5654.
If anyone else has the same amp and some recommendations on which tubes to roll first I would very much appreciate it.

Haven’t got that amp but on my Little dot MKII I swop between 5654/EF95 RT Mullard’s ( I also have the M8100/CV4010/EF95 Mullard’s which are similar) and the 5654W/EF95 Jan General Electric.
I use the Mullard’s as my daily drivers, warm, slower but deeper bass, mids are detailed but not in your face and the same goes for the treble responses compared to ss, the JGE’s I use for a more intimate listening ie more vocal based music Joni Mitchell, Kate Bush, John Martyn etc…They have a slightly less warm feel in there delivery, bass is a tad quicker, mids are more focused and the trebles tighter…these finding are based on using hd660s

I don’t think there’s an answer to what tubes to use first…just roll 'em and have fun, as far as results are concerned that’ll be personal and down to what headphones you use.

Everyone raves about the thx. I haven’t bought it yet because I think it might be too analytical and dry. I have been wondering about this amp. I have the Little dot mk3, and have used the Ge, Mullard, and Voskod. I don’t find this amp very tubey. I wonder how the Eddie compares to the Darkvoice.

Unfortunately I’ve never heard the Darkvoice. I started with a Little Bear B4-X to try tubes for the first time. After liking it very much on my Aeolus I first got a Loxjie P20 for my desk. With this I had the same problem like you that it didn’t sound tubey enough for me. Because my desk couldn’t fit a Darkvoice I was very happy to find this ZDT Jr… It delivers exactly what I was looking for. At least in my understanding a very nice tubey sound which exceeds the B4-X in every way. Resolution, detail, less distortion, much more power. Although I really like my THX 789 I’ve hardly listend to it since I have the ZDT Jr… The 789 sounds flatter/more boring in comparison. Also do instruments sound more real on the ZDT Jr. and the headstage get’s more holographic where instruments feel like they have more air around them and more 3 dimensional (at least on my Aeolus). The 789 may be better in micro details but the all-over more livley sound of the ZDT Jr. caters more to my preference.
What headphones would you wanna use?

Any updates on the tube rolling? I’m thinking about picking one of these for my hd650/580 and wanted to hear your opinions

year I rolled some more tubes. For now my favorites are the GE JAN 5654 and Mullard M8100. Telefunken 6AK5W are nice too. What didn’t knock my socks off for now were Siemens 6AK5W, Raytheon JAN 5654.
For power tubes I think there a not too many choices out there. I have a pair of Mullard ECC89 tubes but they muffle the sound compared to the stock tubes so I think I’ll just stick with the stock ones.

Thanks for the update. I’ve got a few sets on the way: GE JAN5654, Mullard 8100, Raytheon JAN, LM Ericcson 6ak5, and Mullard ECC89. That’s unfortunate about the ecc89’s, those were the hardest to find, might have to pick up a set of Russian voskhod instead

Maybe the ECC89 would improve with a little bit more burn in or I just have a bad pair - I just didn’t give them more than 1-2 Day because the sound was missing it’s magic. If you have them let me know how you like them.
As far as I know the stock tubes are all Voskhod tubes. So getting some would only be worth to have them in stock in case the originals die.

So over the past week I’ve gone through the stock tubes, GE 5*, Lm Ericsson, and Mullard M8100 for the front and the stock and Mullard ECC89 for the rears. I’ve found the combo of Mullard Ecc89 and M8100 to be the best for me, gave the amp more of that tube sound I was looking for. The stock rear tubes are also great, but as this will be a dedicated tube amp with a second SS option I wanted something less bright which the Mullard’s gave me.

TLDR of my rolling: Mullard M8100 is definitely worth picking up and the stock rear tube is fine unless you value warmth over detail.

Thanks for the feedback. I gave my ECC89 also another try. Unfortunately they don’t seem to pair so well with my Aeolus. With Aeolus I especially love with acoustic music, that everything sounds super real. Especially with the ZDT Jr. This is somehow lost to a certain degree with the ECC89.
My 6xx normally live at the office. Maybe I’ll take them home again and give this combination another try.
Let me know if you find other tubes that are worth a try.

I’ve the same opinion on the mullards, too laid back. I have some voshkod 6n24p tubes from 1971 coming in so I’m excited to try those and see if older versions of the stock tubes make a difference(i think stock tubes are from the 90s if i read the dates correctly). As for drivers I’ve tried the JAN GE5654, Mullard M8100, and Voshkod 6J1P-EV 1970s. I prefer the voshkods, the hype about those tubes are real. They do however take a long ass time to burn in(120hrs+) but once they’re ready they sound fabulous. Not as lush as the mullards, but still sounds warm, smooth airy highs and mids with a low end that’s equal if not better. They are also cheaper than the mullards and are easier to find, just be sure to get the right ones, gold grid, ribboned glass, OTK marking on back and preferably from the 70s but 80s should be pretty good too.

Thanks for the input @BBB . I think I’ll also try to get some older Voshkod (6J1P-EV and 6N24P) and give them a try. Finding a nice middle ground between the JAN GE5654 and the M8100 would be nice.

I picked one of these up from EBay for $250, the seller still had a couple left when I last checked.
I don’t know if mine is from the first or second batch, it doesn’t have the 50Hz hum issue, and I haven’t taken it apart to determine if it has the fix. The serial number is 171.
I really like what I’ve heard from the amp so far, it exceeded my expectations and performed the impossible for me and made the HD6XX a headphone I want to listen to.
I still prefer the Elex on the Low impedance output, but the HD6XX on the high impedance output are really good, and arguably do some things better.

In the end it’s probably going to be a very expensive purchase, makes me want to pick up a more expensive set of high impedance headphones like the ZMF’s, which in turn is likely to drive me towards a more expensive valve amp. 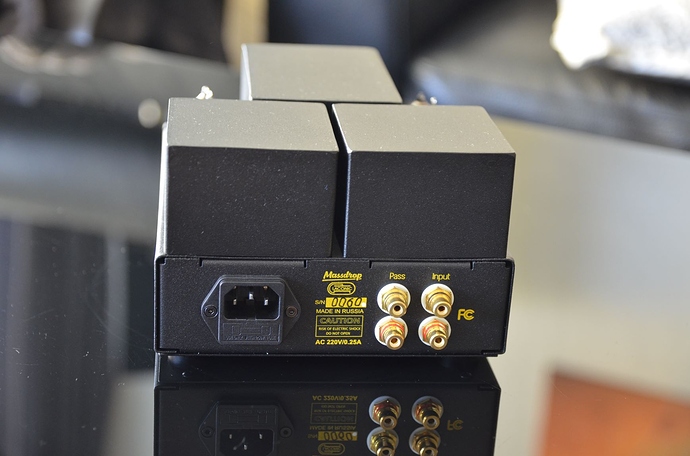 , glad your enjoying it

Having been listening the the solid state amps and the CTH for months now, I’d kind of forgotten just how enchanting a valve amp can be.
The ZDT Jr seems to warm up pretty quickly (which was a concern), and doesn’t seem to generate all that much heat, so I’m missing an excuse to not use it.

So following up on the whether it had the mod done, it didn’t.
The hum was largely in audible on my HD6XX, but on my Eikons it was very obvious.
I ordered this from Amazon
https://www.amazon.com/gp/product/B01HDL0M8S
Cut it into 1.5 inch strips using scissors and wrapped it around the mains transformer, total time for mod about 20 minutes. The only challenging parts being trying to figure out why someone would tighten the screws on the bottom quite that much and how much I had to disassemble to get to the screws for the cover.
Hum gone.

That sounds a lot easier than it had seemed when I heard all the complaints about the first batch. I picked one up in the 2nd, and I think, last batch they sold of these. It’s a shame because its such a good little tube amp. The hum issue with the first batch either soured the demand or cost Drop/Eddie Current so much in returns that they said the hell with it.

How are you liking the Eikons? I’m not sure which wood you got, but I was initially surprised that they were so much lighter than I expected (Camphor Burl)

Mine are camphor, I like them a lot.
Sound has changed a lot in 20 hours, it took a couple of songs to get used to the signature, though given how different they sound now, it could just have been break-in.
They really don’t suffer for being closed and they are surprisingly resolving, vocals are special.

Don’t get me wrong it’s an easy fix, but you have to do a surprising amount of disassembly to get to the last of the screws for the transformer cover. They nicely drilled a hole in the PCB for one of them, but then the last one is hidden under the main board.