This is the official thread for the MiniRig 3 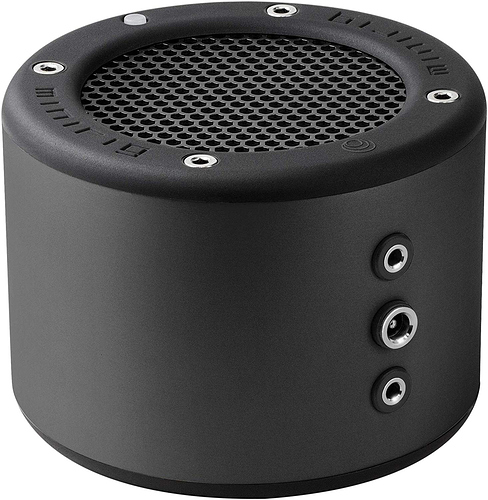 lol I knew this would be up! I would have bought them when i saw the price, but it was only one item xD Didn’t know i had to get two :3

Not super familiar with them, but I’m pretty sure you don’t need two, two will just be a bit better experience

Yeah lol, i knew. It was just a way of speaking

After succumbing to Zeos’ hype (which most likely will happen again sometime in the future), I took the plunge and ordered a pair of the Minirig 3’s.

Been playing with them as a stereo pair for a few days now. They are actually quite impressive with acceptable sound quality and the ability to fill small to medium size rooms more than adequately. The bass is surprising from such a small package and sounds very good at moderate volumes. Placing them on the floor as Z recommended and letting the sound bounce off a wall yields the best results. For traveling these will work quite well for listening to music or watching a video or movie on a tablet.

Are the Minirigs worth $180 USD a piece? Maybe yes… maybe no. If I had just purchased one I’d say probably not. The sound is good but not all that much better than other Bluetooth speakers at the same price point. As a pair, given their small size and the ability to spread them out to create a wide soundstage is where they shine. I can only imagine adding a subwoofer or two for 2.1 or 2.2 stereo would only make them better.

I got a Minirig 3 as a Christmas gift, and another Minirig 3 as a birthday gift a month or so ago. I gotta say these are really nice little speakers, and they are definitely way better when you have a pair.

Pairing the speakers is really annoying. The way it works is, your device should only be paired to one of them. Otherwise if you turn them both on, it will just connect to both and not play stereo. You have to connect to only one, have the other one turned on (but not paired) and then start playing music… then you double-tap the button and it will start searching for the other speaker. This can sometimes take a while or even fail on the first attempt, the music will suddenly cut out and come back super loud if you’re in low gain, before dropping back down. Lately it has also started disconnecting my phone once it pairs in stereo, so I have to reconnect (and mercifully it is still in stereo at this point).

I am all for minimalist design but only when it works, I can’t help but feel like this whole experience could be streamlined with a little switch on the back of the unit… like “MONO - RIGHT - LEFT” so that it knows what to do as soon as it turns on. It is also tough to keep track of which speaker is left or right if you are moving them around a lot.

Still, the most important thing is, they do sound great and people are always impressed by them. I have mostly adjusted to their little quirks and overall I would definitely recommend them.

I went a little further with the Minirig 3’s I bought a few months ago and added a Minirig Sub 3 for a 2.1 stereo system. The only downside is if you add a sub, you have to connect it via a 3.5mm wire. There is no way to have the whole system wireless.

I agree that the pairing process is very quirky. In theory the Minirig App should make it easier, but in fact the app is almost useless. A few of the app functions work… but you are supposed to be able to link two of the Minirigs together so they will always boot up already paired, but this simply doesn’t work (at least IME, YMMV). I really wish they would get all of the bugs worked out with their app.

Once you get the hang of manually getting them paired for stereo and adding the sub into the mix, the sound is great. They even work decent for playing outdoors. They have a low gain and high gain setting, so you can adjust them accordingly depending upon your location and needs.

There is an odd British fellow named Alan Ross (Alan Ross Reviews) who has put out several YouTube videos on various combinations of the Minirigs which even include sound demos. If you have any interest in these speakers, his videos may be worth the time checking out.

A new (revised) competitor for the Minirig 3’s has just been released by Bang & Olufsen. It’s their Beosound A1 2nd Generation. At $250 USD a piece, they better sound really good if you were to pick up a pair for bluetooth stereo. I don’t know much about B&O products, other than they are quite pricey. But just for fun I would love to hear the new A1’s in a sound comparison to the Minirig 3’s. If they pair together seamlessly and sound even better they may be worth the premium price tag.

Thanks for the update!

I did install the app but pretty quickly decided it was bad and haven’t opened it since. I will have another go at seeing if I can force them to start paired though.

I have been considering a subwoofer as well. Would you say it was a worthwhile investment? I noticed that when you crank the volume, bass is what seems to be sacrificed… so is the sound markedly improved at higher volumes with the woofer?

I would say the bass is improved… is it dramatically improved?.. I would say probably not. But I believe the sub does help keep the overall sound full if that makes sense.

At higher volumes I think I did read somewhere that the Minirigs will begin to sacrifice bass in order to compensate for the higher power demands.

I may add another sub (and even a pair of the Mini 2’s) to my set up to have the “ultimate” Minirigs system.

I might have a sickness, and the only thing that will cure it is more cowbell… lol

To avoid distortion at high volume, make sure they are in high gain mode, use the app eq to reduce the bass a bit (as required to taste) then compensate by positioning near a wall to fill the bass back in.
If you crank the volume in low gain mode the driver breaks up quite badly I found…the above set up cured that for me.

) I went ahead and ordered a pair of the B&O A1 2nd Gen bluetooth speakers to see how they’d compare to the Minirigs. 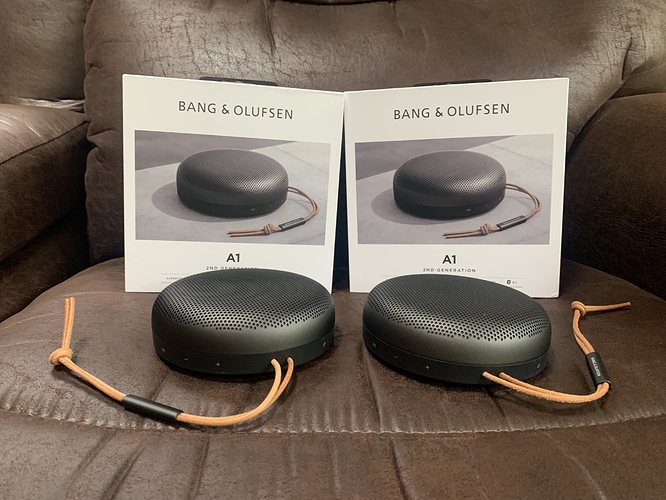 Listened to them outside on my deck in stereo, as well as nearfield and individually for podcasts and phone calls, etc. After about two weeks they are heading back to Amazon for a refund. For now (at least), the current king of this category - the Minirigs - are safe as the “best in class.”

The sound quality is good (by bluetooth speaker standards) but not any better than the Minirigs. If you prefer listening at low volumes they are nice but if you want to crank them up they just can’t compete. With high and low gain setting options, the Minirigs just offer more. They can do low level nearfield listening well AND will impress your friend’s with room filling sound when set to high gain.

The intriguing Amazon Alexa feature built into the A1’s is kind of a joke. It works, but you have to press the microphone button on the speaker to get it to listen to your voice. I don’t know about you, but I don’t want to have to get up and go press a button if I want to use a smart assistant. I can hold my phone in my hand and press a button to use a smart assistant while it’s connected to the Minirig and have a more convenient way to interact with Alexa, but who knows maybe I just wasn’t smart enough to get it to work right. For me, this feature was unimpressive.

Retail price for an A1 2nd Gen at the recent launch was $250. They’re now down a little to $235 ish, but for that kind of money they need to sound better than the Minirig 3 which is priced at $180. They don’t, so back they go to Amazon.