I’m a complete beginner in the audio space (Watching a lot of Z reviews, DMS, Joshua Valour, Crinacle etc) and I’m looking to get an upgrade from my GSP 670 to something quite a bit better. I’m just looking for a closed or open back headphone to become my daily driver. Most of my time spent with it will be used for listening to music (A lot of Hip-Hop & Rap) as well as listening to podcasts and playing mostly open world games. So what I’m looking for is either a closed or open-back headphone that has great soundstage and will give me an immersive experience when playing open world games such as RDR2 and Elden Ring, as well as providing a really solid music performance. I’ve narrowed my choices down to the aforementioned headphones that will be paired with the IFI Zen DAC V2 (Totally open to any other suggestions for an AMP/DAC combo) and I was just wondering if anyone could recommend any of the above or point me elsewhere. Finally my budget is anything up-to $500-$600 total.

I’d skip the Argons (and most other planars) , not because they arent great, but rather because they need a fair amount of power. Getting an amp to power them properly will eat away a lot of your budget.

Havent trying the mmX300 but the Tygr is super solid.

Personally since most of the games you play are more single player experiences, i’d also look into the Harmonicdyne Zeus,it can run on anything (so no amp upgrade needed), it has amazing sound stage, good bass impact and overall a very “fun” and immersive headphone.

P.S you can buy both

Thank you!!! I’ll check out the Harmonicdyne Zeus, they sound really good.

For your music taste the Zeus should be more to your liking another thing would be the hifiman edition xs as an Allrounder, just not sure if the zen DAC can power it to it’s best single ended

You could also get a meze 99 Neo, dekoni pads and have a lot of fun with xbass in those open world games. Your other choices are very solid.

TYGR should be fine for your needs. I wouldn’t go with the MMX300 unless you needed a headset microphone, since they’re a very expensive DT770.

Agree on the Zeus, but there’s another you may want to consider in roughly the same price range – Meze 99 Classics.

Like the Zeus, the 99 Classics have a fun sound signature. Bassy, with decent treble. A V-shaped sound very similar to consumer-oriented headphones, so it could be a smoother sonic transition for you instead of more audiophile cans. New audiophiles are so accustomed to the huge bass of brands like Sony, Beats and Bose – and many gaming-specific cans – that they claim audiophile cans have “no bass.”

Two advantages to the 99 Classics over the Zeus.

One, better construction and build quality. The 99 Classics are all wood and metal. Not a shred of plastic on them.

Two, the 99 Classics don’t need an amp. A phone or PC can drive them to near-peak fidelity and volume. They’re the easiest-to-drive headphone I’ve owned.

The 99s are also a very valid choice (i own a pair of 99 Neos + Brainwavez Hybrid pads).

Personally i still would recommend the Zeus over the 99 beceause they lack the sound stage and overall “impressiveness” that the Zeus have, but that IMO.

I agree that the sound stage isn’t as big but Xspace on the ifi equipment can make up for it…kind of. Maybe I’m just a meze shill now lol, but the build quality for the price is really really hard to beat.
A buddy of mine is trying out my neos right now and first thing he said is “these are great, I can actually hear what they are saying in a video”. He’s comparing them to wired Bose iems.
I don’t want to ruin him yet with my TH900s lol.

I’m in the same position but looking for games that could pair well for fps. Closed and being able to be driven from a phone for passable sound is a plus, here is my list. Any help appreciated. Don’t mean to steal the thread but maybe my question can help op?

In your case i’d say go for the Tygr, no amp needed and its solid overall with soundstage and imaging, the reason i recommended the Zeus over the tygr was the overall impressiveness that is much more potent in the Zeus - however in FPS you want less immersion and more “awareness” - like with the Tygr

Now a few notes about your lists - like i said at the start , dont go for planars without a dedicated and preferably fairly powerful amp (nothing crazy but entry level tend to not be enough though it is case by case).

Just to be clear you can get them to “make sound” but you are somewhat handicapping them without one - so avoid stuff like Sundara, HE400, DCA AEON, Argons etc.

My mobo has a upgraded sound card that says it drives 600 ohm headphones would it be enough just until i get a dac/amp set up?(i know integrated sound sucks compared to dedicated dac amp) It is a SupremeFX S1220A. I know without a amp they will be lacking. It would be temporary. I am using a like 8 year old astro a40 so im thing just about anything will be an upgrade.

With planars its less a matter of Ohm, and more about straight up power - how many watts can it push out (in a clean a clean way).

if you look at the specs of most planars they have a fairly low Ohm load - even powerhungry ones like the Hifiman SUSVARA, which is notoriously demanding. A good indication of the amount of power a headphone needs is sensitivity spec anything below 100 needs power (its not always the case but its a good indication)

they are very low and i doubt that it can output more than even an enterly level amp, so you mobo will probably not be enough to really give Planars the power the need (they will make sound how good that sound is questionable )

Which is why im saying avoid the whole thing all togther and just go for a dynamic driver, there are some really great headphone that are dynimaics like the ones mention here, Tygr, Zeus, Meze 99 and a bunch more we havent mentioned

As much as I love my Argons, I would not consider them as your entry point to more expensive headphones. They have a very singular sound signature, very enjoyable, but quite extreme, son they are not well rounded, all purposes headphones… They are more like a niche headphones for specific moments and music.

And, as others have said, they do really require some power, just a powerful dongle is enough in my opinion, but just a phone or laptop is not enough.

Again, I like them very much, and I enjoy them, but I would not recommend them as your only main headphones for all purposes.

Audioquest Nighthawks are my favorite gaming headphone. The bass sounds amazing, and for FPS it is just mind blowing how they sound, in BF5 at least. I have to say my new TH900 Red cups sound better with COD MW 2019 though, but then again I havent played with my nighthawks with COD much. I do use Equalizer APO though to get even more bass out of my headphones, cuz you know the bass slam while gaming is sublime experience everyone needs to experience with the nighthawks! 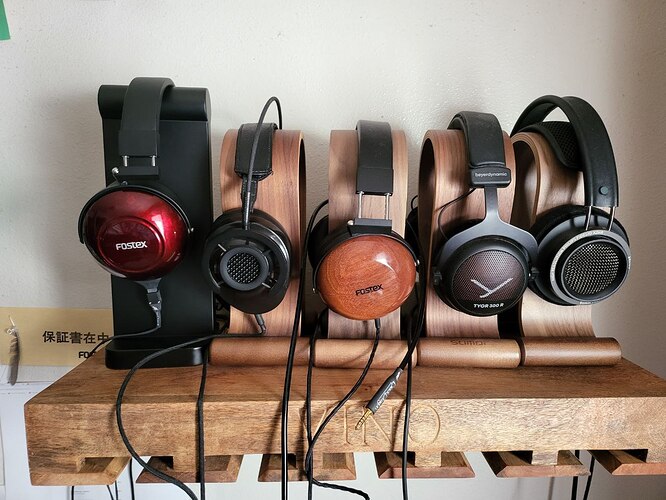 Correct me if im wrong but arent the Nighthawks discontinued?
been looking to try them out myself but havent seen any them at any retail

Yeah and the used price has gone through the roof for them ;( , think you could get them for under 200bucks but those days seem to be gone

I own the Drop 99 Noirs, Harmonicdyne Zeus, Sennheiser Momentum 3s and various other headphones, including planars. The Ifi Zen DAC is perfectly capable of running planars, I use my Ifi HIP DAC to run mine occasionally. There is also the MassDrop Hifiman HE-R7DX with a balanced cable. I’ve lent mine to my son to game with and he says they are fantastic (probably never see them again). Two other options would be MassDrops Sennheiser HD 6XX or HD 58xJubilee (balanced cables). All this being said, if I was forced to choose, I would probably go for the Harmonicdyne Zeus, dynamic, has awesome soundstage, uber comfy and do not need XBass (but I use it anyway).

Thanks everyone for your help, I’ve been thinking about this ALOT lol. I’ve narrowed it down to the Tygr 300r and the Zeus Harmonicdyne. Given my original post as too what I’m looking for, which one do you guys recommend. Also would both of these sound good with the IfI Zen Air Dac or does anyone have any recommendations for any other AMP/DAC combos