Most likely due to resolving power.

great and ejoyable but only a B+? I think is bettert than Timeless!!!

Otherwise the Kato sounds “grown up” with a much more natural sound, especially when it comes to voices.

The bass is more precise and fuller than with 7hz, voices have body and vibrato, wind instruments, stringed instruments and drums are noticeably more natural.

In a direct comparison, the 7hz always sounds a bit “thinner” and bright 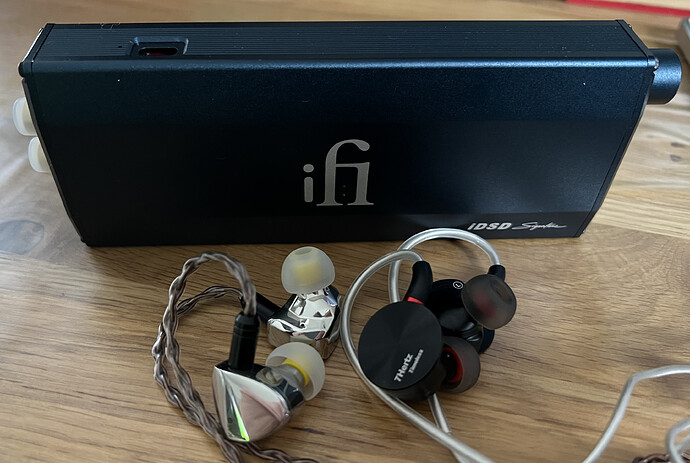 Without the direct comparison, the 7hz is quite acceptable, but I can’t quite understand the hype.

Most likely due to resolving power.

Not realy - The iDSD Signatur has plenty of it, but…no

Probably all, as always, a matter of personal taste

Can you tell me at the scene level how the kato is compared to the tiemless? Especially on the scene but not only sideways but also in depth.

It has been a while since I bought the Katos, and so far it has been my favorite, due to the evidence of me subconsciously going for my Katos all the time instead of the other IEMs that I have and have used a lot before (Yes, and that includes both the Starfields and the Arias.) It’s one of those IEMs where I can say that I don’t have to worry about anything that much and just let the sounds, tones, melodies and richness just go through my ears in an even more pleasurable sense, at least for me.

I think the only downside that I can think about the Katos would be the glossy silver version that I have, particularly its tendencies to be a fingerprint magnet, therefore making me wipe it for every use. Not only that, I also noticed that the glossy silver version I have gets scratches quickly, it’s not noticeable at first but when you look at it close, oh my, the scratches ruin its beauty but at least it’s still shiny at a distance.

Overall, still my favorite though, though I wish I could have had the Matte steel version to resolve those gripes I have mentioned.

It is all matter of taste. They are both good it will come down to your ears. I prefer Timeless but that’s me,

Blessing 2 is more resolving but to me sounds shouty at times. Kato, tuning wise is more to my tastes but not as technically good as Blessing 2.

I also have to decide between these two. But not the normal Blessing 2 but the Blessing 2 Dusk. Don’t know why people would get Blessing 2 when the dusk exist

Because B2 OG corresponds to a different library and different musical tastes.

In my case, the Dusk wasn’t/isn’t available where I’m from. Importing from shenzhenaudio would mean heavy import fee.

All the hype surrounding the B2 might also be a reason for some people.

Lucky you. I got the Kinera Norn recently and like it’s upper mid energy more than B2.

I still can’t decide if I should get Kato or Blessing 2 dusk. I’m mainly listening to male vocals and classical music

For male vocals or more Bass get Dusk, for a more neutral sound get the Kato

DD timbre. Blessings have terrible timbre and coherency, unless that doesn’t bother you…

Yeah, timbre is my main concern. I will probably get the Kato

Hi to all
A question. For those who have tried the newest Aria model (Snow Edition) which uses a new driver and tuning. How close is the gap between this one and the Kato in overall sound quality?

I think I can agree on this one, for I have been getting excellent timbre on both the Kato and the Airships.

Has anyone had issues with humidity/condensation on the Kato? How often it happens?