Hi guyz, looking for an iem since I have two open back headphones that are phenomenal but they aren’t as portable as IEMs and I hey aren’t closed back. So instead of another closed back I decided on an iem for portability. For reference I own the sundaras and carbon Nighthawks and love both since the vocals are either forward or not recessed. I used to have the TIN T2s and blons 03 and loved both but then the timbre of the t2 sounded too off and the blon’w vocals were too recessed and covered by the bass. I didn’t care too much for the T4. And finally I basically want something with good treble for fun music like kpop. Plz help me look for options!

The most forward vocals I can think of come from the Tapes to be honest. Treble is good and bass is good too, Link me some tracks you like and I’ll try listening to my tapes to make sure they are not too laid back in the treble for you.

Edit: they don’t stretch your budget much either so should be gtg if they sound good.

Shuoer Tape??? They do not have forward vocals at all, they are recessed. And they need eq to remove that 3,5khz peak.

I’ve heard good stuff about it, but sadly there are two possible deal breakers. I do love treble but I’ve heard those are hard for treble sensetive people which I kind of seem to be (if not I just have alot of poorly recorded sibilant music) and actually yeah now that I think about it I definitely want ok bass to listen to ALOT of hip hop! The other possible deal breaker is that it will need alot of power to drive, I kind of want to be able to just hook it up to my phone on the go

Honestly I don’t need the vocals to be super forward or anything. Just not recessed. Looking for options to find the fight iem for me

Yea man, they shout like a mofo so vocals are super forward when I listen to them.
1k-3k rise is steep man. like 10db from 1-2 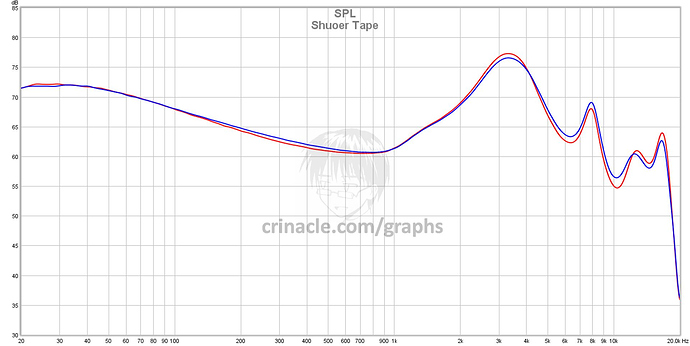 Power is not an issue, and for treble is it lower or upper treble for you since this peak is early it wont affect you as much unless your sensitive to lower treble.

The Tape isnt a good recommendation for the OP, check all the reviews on it and they all agree that the mids are NOT forward.

The Moondrop Starfield is a great pick for them.

The mids are basically the same…the lower treble harmonic shout will make female vocals really forward, so he will be able to adjust listen level to that and then still have all the details of the upper treble on J-pop etc. The bass will give a little more punch which will add the to fun factor.

EDIT: I do not like the fit due to the body having lines that my ears don’t like, but outside of that they are pretty good.

P1s are good but I worry about QC since I had a bad connector and the treble has a metallic sound the longer I’ve listened. So I’m looking to get rid of both my Tape due to fit comfort and my P1 due to sound complaints. I may keep them if my new batch of IEMs are lack luster tho.

EDIT: also you may try the Ikko oh1 since that was even described as an “Asian” sound by crinicle and may have good vocals. The 10s are good but save some cash if you can.

but you do need to spank them power wise

I do have the xduoo plus and they are generally promising from what i{ve heard. ill keep em in mind.

The Moondrop Starfield is a great pick for them

i do keep on hearing about these and they are indeed in the lead! i just really wanted more opinions from other people on what is good out there or if there is something that would work better for me

Edit: added these since you have had the t4 as a reference point. The p1 is deff neutral and mid forward, you have the power to run them so it may be the best bet. For budget the FH1S is a great model that sounds neutral, but can have sibliance, so be careful if thats a thing you dont like.

Jade Audio EA3’s or Fiio FH1s sound up your alley.

Do you have them? What’s their deal?

Best way I can describe them is more controlled low end and excitable treble region over the Blon’s. I prefer my EA3’s over the Blon’s because of the treble sparkle.

Gotcha that makes sense. It’s true that I really dislike now how messy the blons sound. Would you say vocals are still recessed?

Not at all as long as you’re using silicone ear tips. Using foam ear tips on the EA3’s shoves the vocals into the mix.