I need some advice.

So, people say that the Asgard is powerful enough to power even the most power hungry headphones. That’s true for pop/rock where the Dynamic Range is narrow.

However, when I listen to classical music (which is 80-90% of my library), and especially when I use one of the popular EQ settings (oratory1990, etc.) I need to crank the volume up to like 3 or 4 o’clock on some records. Reason being that most classical records have a very wide dynamic range and to get the quite parts to be sufficiently loud, you need to crank up the volume.

Any suggestions or recommendations for upgrades from my current stack?

But back to your question a jot 2 would conserve the look of your stack and give you lots of juice especially from the balanced output but could be a tat bit brighter, if you aren’t in the us a singxer sa-1 could be the better Or if you are tube curious a lyr+ could also be a good choice but it relatively new and not to many reviews are out so maybe a lyr 3 could be had for a good price

What is your budget, and are you planning on switching headphone cables to balanced ones?

I mean, I eventually get enough power, but often times on high gain at 3 to 4 o’clock.

I play my music through the Roon app. The app shows the dynamic range for all albums in one’s library. For example, most of the Rock albums have a dynamic range of 4-7 and are recorded fairly loud to start with. So, I can easily keep the pot at 11-12 and I’m good. A classical album can have a dynamic range up to 25, which means that some parts sound loud at the same 11-12 pot location, but then other parts are barely audible.

Regarding my cans, the HD6XX are known to be power Hungary, and while the Sundara’s don’t need a lot of power “on paper,” I think that planars work a little differently. Regarding the Elegias, yeah with pop music (and before eq) they are fine even on low-gain at 2-3 o’clock on the pot for Rock music.

Regarding pre-gain, I was under the impression that you need to apply it to avoid clipping when you are raising the volume of certain frequencies.

I’d like to spend under $500 dollars (maybe slightly over if I could get precisely what I need). I’d get a balanced cable if it facilitate a overall amplification boost along with the amp.

Also, to save cash, I’m considering just not eq’ing, since I think the HD6XXs and Sundaras sound good enough without oratory’s or (insert internet audio guru) suggested eq settings.

Basically, I wanted to have the option of eq’ing and still having a bit of headroom, but if that’s going to cost a lot of money…maybe it isn’t worth it.

I’m betting it’s cutting the input gain way to much. None of your cans should be hard to drive and none of them need giant amounts of eq to sound “right”. But we do all hear differently, I would add back input gain in small amounts to see if there’s actually any clipping.

I have to ask do you have your Asgard3 on low or high gain??

I was just kind of going off of the settings suggest by oratory.

For example, here’s what the graph looks likes for eq settings for the HD650/6XX (the pre-gain is set to -8.5 decibels). 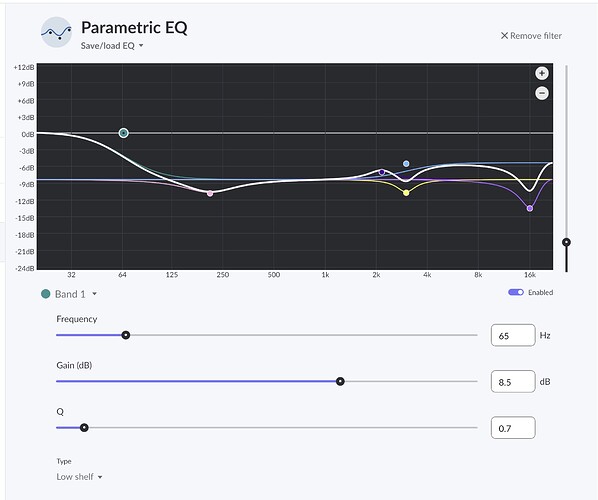 I assumed that if that bass goes above the line, anytime the bass in a music track is prominent I’d get distortion. Am I wrong?

My first thought is if it’s loud enough at 3-4 o’clock, don’t worry about it,
You hear it if the amp was clipping, and that would be the only reason to worry about the position of the volume dial.

Most amps do not use linear pots, so 1/2 volume isn’t 1/2 power, the position of the volume control doesn’t mean anything, unless it’s maxed out, the sound coming out is clipping (you won’t miss this), or it’s so low it’s in the unbalanced part of the pot.

Generally, high gain for the HD6XX and Sundaras. Sometimes high and sometimes low gain with the Elegias.

That makes sense. I’m not too knowledgeable about the fine points of audio, amplification, etc. I just go off of the little bit of research I do online when I’m looking for gear or seeing how I can improve the sound of what I have.

If you don’t have enough headroom then yes it would distort from clipping. The Asgard should be powerful enough. The 6xx are sensitive enough that it shouldn’t be an issue. The sundara wants current so that might be an issue but still I don’t think it will distort with a small bump in EQ.
Looks like you are trying to hit the harmon target.

Oh heads up don’t add a ton of bass to the elegia, it will damage them as focal’s can be fragile when bass boosting.

Yeah, sometimes what I do is I have the Eq suggestions by oratory and then bring up the input gain accordingly.

This isn’t a major issue, I was just interested in what other people thought about my “situation.”

Looks like you are trying to hit the harmon target.

Yes, that’s what they say is “optimal” audio reproduction.

Oh heads up don’t add a ton of bass to the elegia, it will damage them as focal’s can be fragile when bass boosting.

Thanks for that piece of advice.

Definitely play around at low levels, everything should be clean enough that playing with gain is pretty safe.

Meaning it’s okay if the eq curve goes above the 0 decibel line?

Yep but be sensible with your volume while testing.