Idk, kinda making a post about this just to get some impressions, I have the Older HD600s, got them 2-3 months ago, sound amazing, especially on a tube, took the foam inserts off the back and prefer them a bit more this way, although the difference is pretty marginal, and now I saw that the HD600s have a redesign (The Logo is now to the side instead of centered on the headband, kinda gave it away), since I was looking to buy one for my dad since he bought himself a Darkvoice 336SE.

Kinda curious to see if anyone has heard them, if they sound any different, any improvements to the design (i.e. Better Material, Different Foam, Pads, etc).

If they do sound different, how much, is it an improvement or a detriment, or not noticeable without an A/B.

Here is a Pic of the redesigned HD600s: 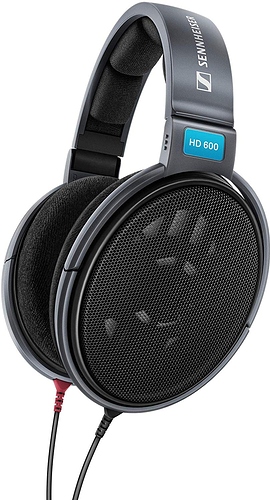 Here’s the buy link from Amazon:[https://www.amazon.com/Sennheiser-Open-Back-Professional-Headphone/dp/B00004SY4H]

I got them and i had the older design for a while. I think they look much better now. that older 90’s style blue marble i really didnt like. they look much more handsome now.

Thing is they sound different. I swear the old Sennhieser veil is not as thick anymore. i was comparing to the 58x and the 58x had more and from all accounts people said it had less veil than the hd600’s.

That’s not really the right comparison, you would have to compare an older 600 to a newer one. Also I don’t think there is less of a “veil” on the 58x, the 58x is just better extended than the 600 at times

I just watched the video, what are you wondering about?

Nothing, just thought i’d post it to the thread. I do agree though thats its too expensive. I think 200$ might be more like it. especially now with the cheaper packaging and no case

Yeah 200 seems a bit more in line with the 6XX and the 58X (Idk, if they wanted to market it as a classic sound then maybe they can go a bit higher, but 300 is a bit excessive either way with the options now a days), especially since they’re being made with the same material as the Drop stuff (I think from the look of it), instead of being “Made in Ireland” like the older stuff (OG 600s and HD650s).

Also since they also don’t come with a case now, 300 is pretty steep for headphone that essentially has an identical mold to it’s more modern brethren.

Also yeah, I love my HD600s, but I prefer the more modern look, idk, the Marble look as you said is a bit odd, then again I prefer the logo in the center, but it’s small beans honestly unless it also improves comfort, which I doubt.

Then again the OGs are relatively comfortable and sound great, so the color doesn’t really bother me since it doesn’t affect the sound (hopefully???).

From my understanding the 6xx is roughly equivalent to the original 600, and the 58X is closer to the 650 or 660s. I could be mistaken.
I do agree that I would like to hear the new 600 put head to head with the old 600 (maybe something @ZeosPantera could look into)

The 6xx is just a 650 essentially, the 58x has a close tuning to the 660s but not the same technicalities or driver

I always thought the HD58X and HD660s used a modified HD700 Driver? Would make sense though since the 660s are ALOT more expensive.

The 58x use a modified hd5 series driver if I recall correctly. The 660s might use that tho

Would still like to see the old and new 600 put head to head.

Huh, well makes sense with the 58X since it also starts with a 5.

Same, I have a really old one with the blue speckled pattern before they made it black and grey

Dang, mine are Blue and Black, idk if speckled, looks more like cammo design to me, bought them a year ago.

Oh also, getting my Phonitor 2 tomorrow, I’ll be at school doing a Psych Exam but I’ve got a friend to sign it while I’m out, I wonder how it’ll Pair with the HD600s.

Joshua Valor didnt mention any sound differences. So i think they most likely sound the same

They are different color, sound has to be changed…
Vibes are obviously different when they are used.

Nah just slap a black paint job on the revision, and the good review vibes come flowing in. Totally.

Nah just slap a black paint job on the revision, and the good review vibes come flowing in. Totally.

It can also make things even worse. Double edge sword.
Adding more mass to frame is totally going to effect the sound and how the drivers function on heavier frame. Also they get more closed, since more material is added to the normally fully open area.