As the new console generation is slowly rolling out to living rooms across the world, it’s still not fully documented how to get the full audio experience from these consoles. Having researched the topic, I’ve gathered my findings in this thread to help all of you to get the best audio experience out of these new machines. Note: this guide is mainly aimed for casual/single-players. I have no experience with the in-game voice chat of these games.

A simple way that the console manufacturers promote is using the headphone jack on the controllers. DualSense and the Xbox controller both have a 3.5mm jack. This is of course not the best choice. Both controllers are bluetooth enabled and can only power weaker headphones. In a bind, this works.

One of the big caveats from these new consoles is the lack of an optical out port. Most of the audio is supported through HDMI-ARC, which suits for most use cases. Not everyone has an HDMI enabled receiver. One solution is to use the optical out of your TV which, depending on your TV is good enough.

The support for USB dacs is also severely limited. The PS5 only supports UAC1 -dacs, which limits the choice of dacs. Many of the most recent DACs are not supported. On the Xbox side, the situation is even more dire - you can’t use anything that is not licensed by Microsoft.

One of the big features of the next gen consoles is the HRTF audio features. Xbox Series X has a dedicated audio chip for handling audio, whereas PS5 promotes having it’s own proprietary Tempest 3D Audiotech. On the Xbox side this is offered via Microsoft Sonic, DTS Headphone:X or Dolby Atmos for Headphones. Xbox offers HDMI passthrough for the headphone audio, enabling you to use any type of audio stack, such as the optical out of your TV.

On the PS5 side, Tempest requires either a headphone plugged into the controller, USB/Bluetooth headphones or a USB dac. There currently is no HDMI passthrough, but Sony is reportedly looking into implementing it into a future update.

Here are some options for getting the most out of your existing stack:

TV connected to a dac. This supports the VSS/HRTF features of the Xbox:
Console → TV → Optical out into DAC → (AMP)

For those of you who wish to use tempest, this is a simple stack:
PS5 → USB to DAC → (AMP)

For the cases where you want to use your existing DAC/AMP while using Tempest:

Questions and comments are more than welcome.

Syba sonic works with the ps5 also and it has a optical out so you can use a external dac.

Thank you! Added it to the list. Seems like a very affordable option for getting the audio out optically.

It’s an interesting product, but I wonder what the switch on the back does. One of the reasons G6 is good for my use cases is that I don’t need to switch the inputs - the card automatically takes all inputs as needed.

I think they are are trying to create a non-proprietary Astro mixamp which also has the switch (which also doesnt do anything really). I have both but I haven’t tested USB out on Xbox SS but Creative confirms to me that it’s compatible

Let me know how the Xbox test goes with the GC7. Will add it to the list if it indeed works via USB.

Creative’s webpage only lists PC, Mac, PS4/5 and Switch. I haven’t seen any combined audio products that would work with both Sony and Xbox.

Will do, yeah I noticed that before I ordered and I specifically asked them, they said it’d work. I’ll get back to you with my findings

What I can confirm tho is that it definitely works with optical in (with HDMI audio extractor) whereas Astro Mixamp PS version won’t work with Xbox even with optical.

Did you manage to test the USB connection? The optical stripper is a solution for most of the tools, but native audio connection obv is key for gamechat.

Just did, you’re right haha I can’t get the USB to work, in fact I don’t even know if the new Xbox (I use Series S) supports audio/mic over USB. On the Astro MixAmp I have always used optical as well because the USB audio sounds super weird to my ears, and I don’t use the chat function within Xbox 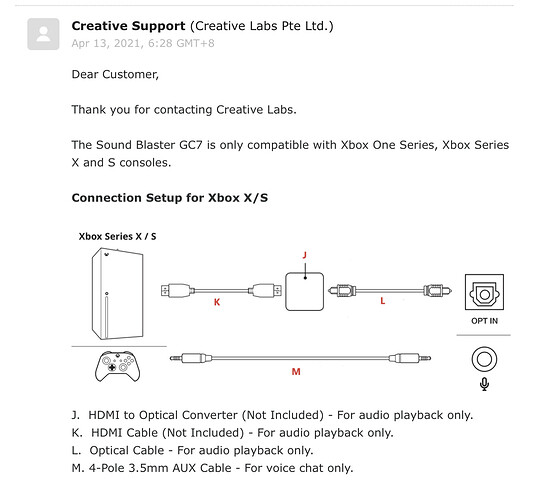 Does anyone know of a good USB to optical converter that works with the PS5?

Thanks I may end up going with that if I can’t a dedicated one. But according to some reviews, this one should do the job. I ordered it and will update later with the results. 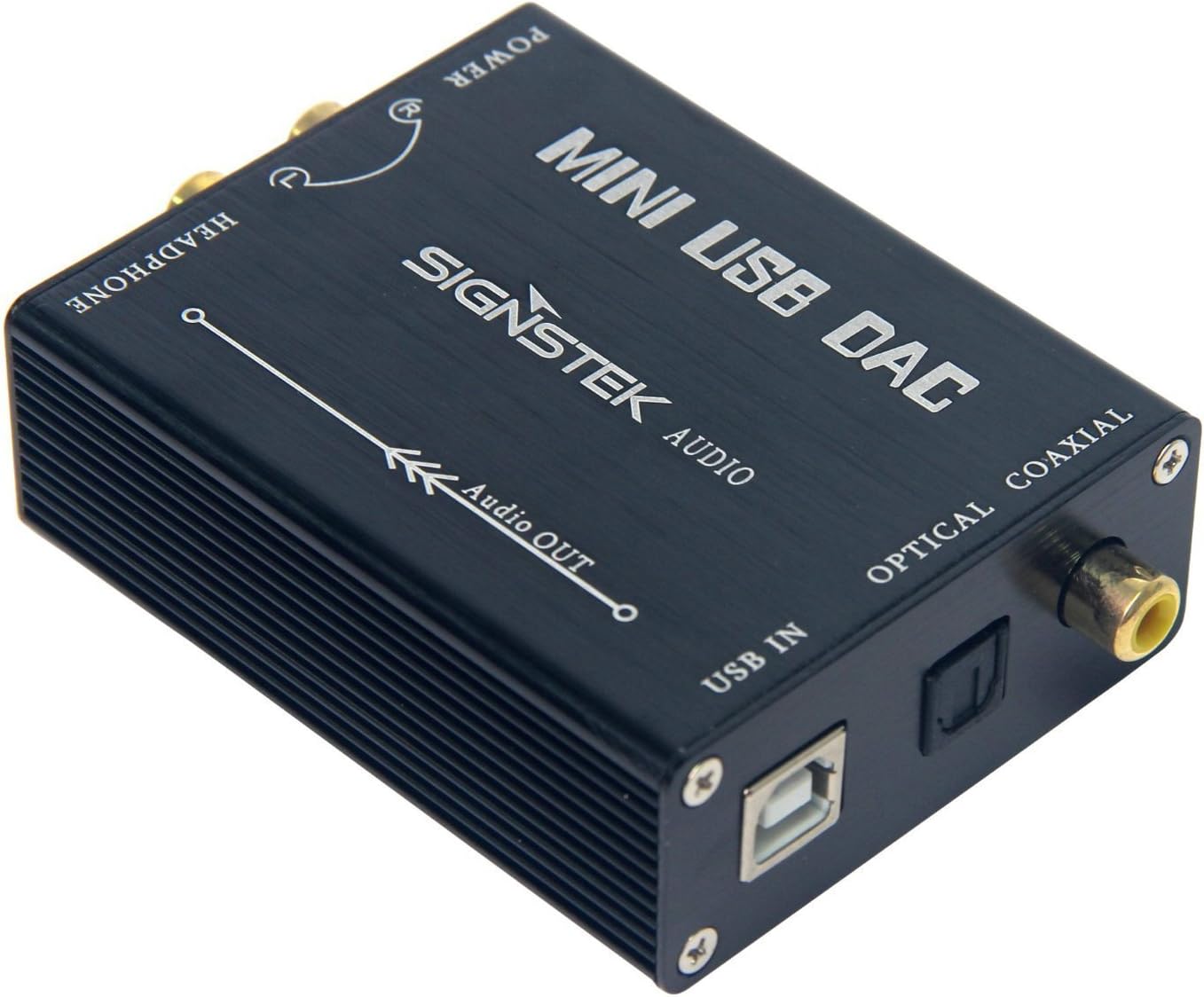 Anyone has experience with the fx dac x6 on ps5? It’s what I’ve been using for my ps4

It works. the DAC>DAC>AMP combo is what I have right now and it works with PS5’s 3D audio. I eventually want to get a Hel 2 or something because that stack on my desk is an eyesore.

If it works on the PS4, it should also work on the PS5. Both systems have the same UAC1 limitation.

I use it through optical on ps4 though, anyway I’ll report back when I try it

So, I been messing with it, for me the biggest thing is actually getting audio to an old sony boombox (that only has 3.5 in) that I use as a soundbar of sorts, do have demanding headphones, but mostly play with porta pros tbh and those work wonders from the controller.

-fx dac x6 and random ugreen usb A to 3.5 dongle, get recognized and get audio through usb, but the volume is messed up, I need to turn it up way too much, which makes it useless for demanding headphones, even the boombox i have to boost too much, not really usable.

So the only solution I found was to just set the console audio to hdmi and get the output from my TV’s optical out to the fx dac x6, there’s 3 settings for hdmi, av amplifier, soundbar and tv, I think soundbar just passes stereo and av does something weird to compensate for the speaker position, didn’t like it, specially with headphones, so the best setting I think is just “TV” cause that does get some of the 3d audio stuff, still wouldn’t use with headphones, with the boombox it´s pretty good…

So my conclusion for headphones is to just get ones that can run off the controller, for example hd660s sound fine, maybe lack a bit of punch, but it´s do-able, that would be the limit imo anything harder to drive will lack substance, just do koss bros.

And if you’re aiming to connect speakers, you’re basically gonna have to do it externally through the TV or an hdmi extractor, it works fine, I actually think I hit lucky there cause the tv 3d features work fine on my setup, if you do decide to use this signal for headphones it works but it’s meant for speakers so it sounds kinda off.

The Qudlix 5k works great via USB on my PS5. It even has an option in the app especially to prevent the volume drop you mentioned.

And the best thing of course, PEQ for your headphones.