The Serial is currently my favorite IEM, and if I didn’t mind the slight difference in timbre, and slightly less defined (but still well textured) bass, that spot could easily have gone to the Canon. So in answer to your question, I think the Serial and Canon are fantastic choices, and at the very top of my IEM recommendations.

I’m only slightly interested in the Vortex because I doubt it will cost much less than I paid for my used Serial, but I just can’t see how it could achieve the same or better tuning with 1DD than the Serial is doing with 3. I think the best case would be that it matches the Serial as best they can, with slightly less extension or resolution here or there because it would all have to be squeezed from 1DD. And in that case, I’d just keep my Serial anyhow. If it’s a bright neutral tuning, that’s what many single DDs are tuned to and it’ll have tough competition. If it’s bass-centric, then they are undercutting their own Fan. So I’d imagine it’s a more affordable version of the Serial, going for neutral with bass-boost?

I’m a bit clueless where it will fall in their current line-up.

The Serial has the timbre and coherency I’d want a single DD for, but the extension and overall sound is more than I’d expect from a single DD.
By contrast the Canon had remarkable imaging and a very engaging tuning but lost some of the viscerality and timbre of DD. There have been other sets that had the same “uncanniness” for me - notably the planar Timeless, or full BA T800 - where I love the tuning, but because the sounds are teleported to my brain without the physical air being pushed to do so (slam, etc.) they feel like they lack breath/weight, and I’m constantly distracted from losing myself in the music. Instead I end up impressed with the sounds, or the IEMs themselves… the saying goes “Listening to headphones with music instead of listening to music with headphones”.

This doesn’t mean the Canon’s timbre is bad, far from it, I doubt I can actually word the precise difference, it’s just something I subtly notice in the experience that feels different to the Serial. If all Serials vaporized tomorrow I would go about my life very happily with the Canon, once again this is not a quantum leap in “superiority” between one set or the other. Each has a different feel. 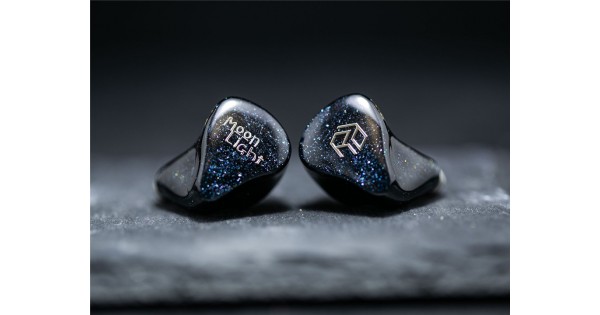 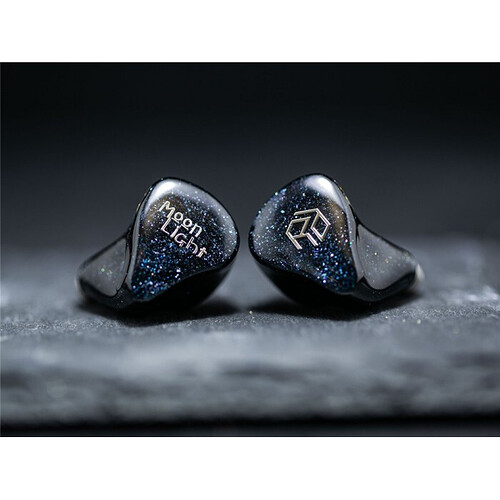 That makes complete sense. I actually follow about 5 reviewers, and he is the only one that I view as similar on music tastes. Having the ability to see what works for different genres is a good thing. I find Crinacle and Super Review to like brighter tonality than I do, but when they like something that is darker, it is usually a great sign for me.

I run my Olina with the double mesh mod ( two of the stock filters ). Since I did the mod, I haven’t noticed the 5k peak. I tend to listen to an IEM for a half day at at time, typically at lower volume levels, which probably helps.

If a peak gives me problems, I am not afraid to EQ it out. I find that I don’t EQ as much with my current IEMs. I used to do this a bunch with the KZ sets, but now I find that I leave things mostly alone. I do have a bass shelf I throw on the S12 at times, and when I have a migraine I have treble filter that helps me if I have a zoom call.

I run my Olina with the double mesh mod ( two of the stock filters ). Since I did the mod, I haven’t noticed the 5k peak

Makes sense for the Olina with two filters. When I tried this mod on Oxygen i found to make the sound too muffled.

I am not afraid to EQ it out

I tend to not EQ usually.

It no denying interesting but time will tell and my patience to wait. It could be quite good given the Canon and Aladdin efforts. I hope it’s is better than the ISN 50.

Stumbled upon a shop that already lists the BTR7.

Not too much info. Doesn’t say how much power but it should be available in June 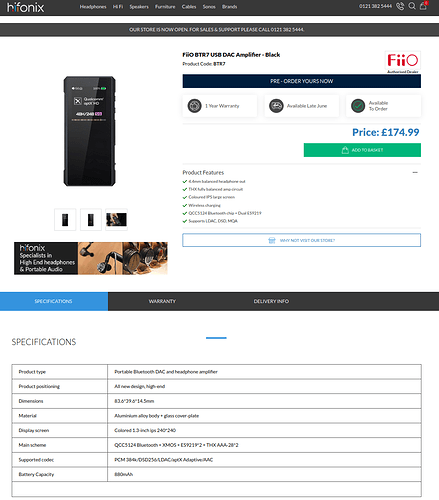 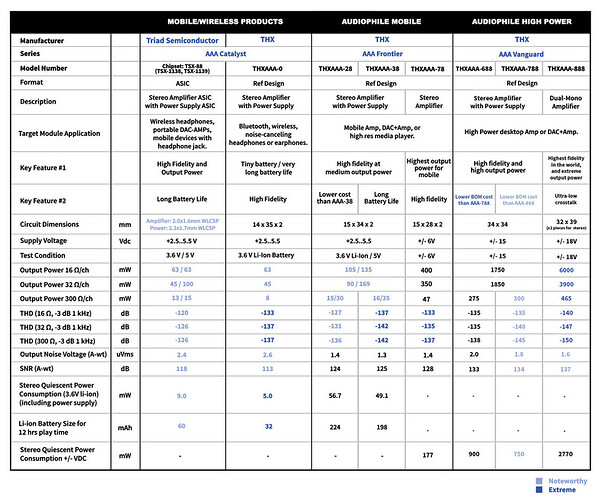 that amp module produces 90mW into 32 ohm. and it looks like it has 2 of the modules, 1 for each channel.

edit: though, im not sure why it has 2 amp modules as those are stereo amp modules already. they may have the channels bridged to get more juice/channel.

4 amp module/chips would make sense. For a true balanced circuit you need 2 amps per channel (push pull). But 90mW / 169mW would be lower than the BTR5 with 220mW at 32Ω. Would not be the biggest surprise tho, they did the same with THX amp module for the M11, had less power too.

So it’s 360mW balanced in the best case. Still not comparable to brick size DAC amps. And not enough difference to replace the BTR5 imo

Of course, one amp “pushes”, gives out positive voltage, the other “pulls”, negative voltage. Double the voltage is four times the power. Got confused by the double value “90 / 169mW” but I guess 169mW is a peak value.

the 169mW value is for the thx AAA 38 amp module, which is more powerful. that spreadsheet is done a little weird. since they have the same values on some between the 2 amp modules, they use 1 column. where it has 2 numbers with a / inbetween, dictates one from the other

Sieveking, authorized importer for germany, is also talking about a Ananda Version 2 with stealth magnets. Still can’t find a dealer though.

The Ananda magnetostatic headphones replaced the Edition X model in HIFIMAN’s portfolio. Meanwhile, there is a new edition of both. ANANDA version 2 now comes with the technology of stealth magnets in addition to the NEO “supernano” diaphragms of its predecessor. So HIFIMAN’s all-rounder can now do even more.
Inside it, ultra-thin diaphragms of the latest generation perform lightning-fast work. The NEO “supernano” diaphragms are 80% thinner than previous developments. This is combined with newly designed stealth magnets. They literally no longer stand in the way of their good sound. No more sound waves break on them, which would lead to distortion. The Ananda’s characteristic sound pressure level is 103 dB, enabling impressive sound even at low output voltages.
Ananda version 2 shines on smartphones or portable music players without significant distortion. Of course, it becomes seriously dreamy on a high-quality headphone amplifier or a headphone output of a good hi-fi amplifier, provided that the output is not only to fulfill a token function on the device. Here, its sound unfolds: open, rich, warm and balanced on a wide stage.
At 440 g, the headphone is not heavy. The headband and driver suspensions were designed to ensure long-wearing comfort. The asymmetrical ear pads follow the natural shape of the head and ear. The headband is made of flexible steel and can be adjusted to fit the head size. The included cable is very flexible, does not tend to tangle and is optimized against microphonics.

First German hifi shops have the Ananda version 2 in stock. Any US shops too? Only checked headphones. Com, they don’t mention a new version. 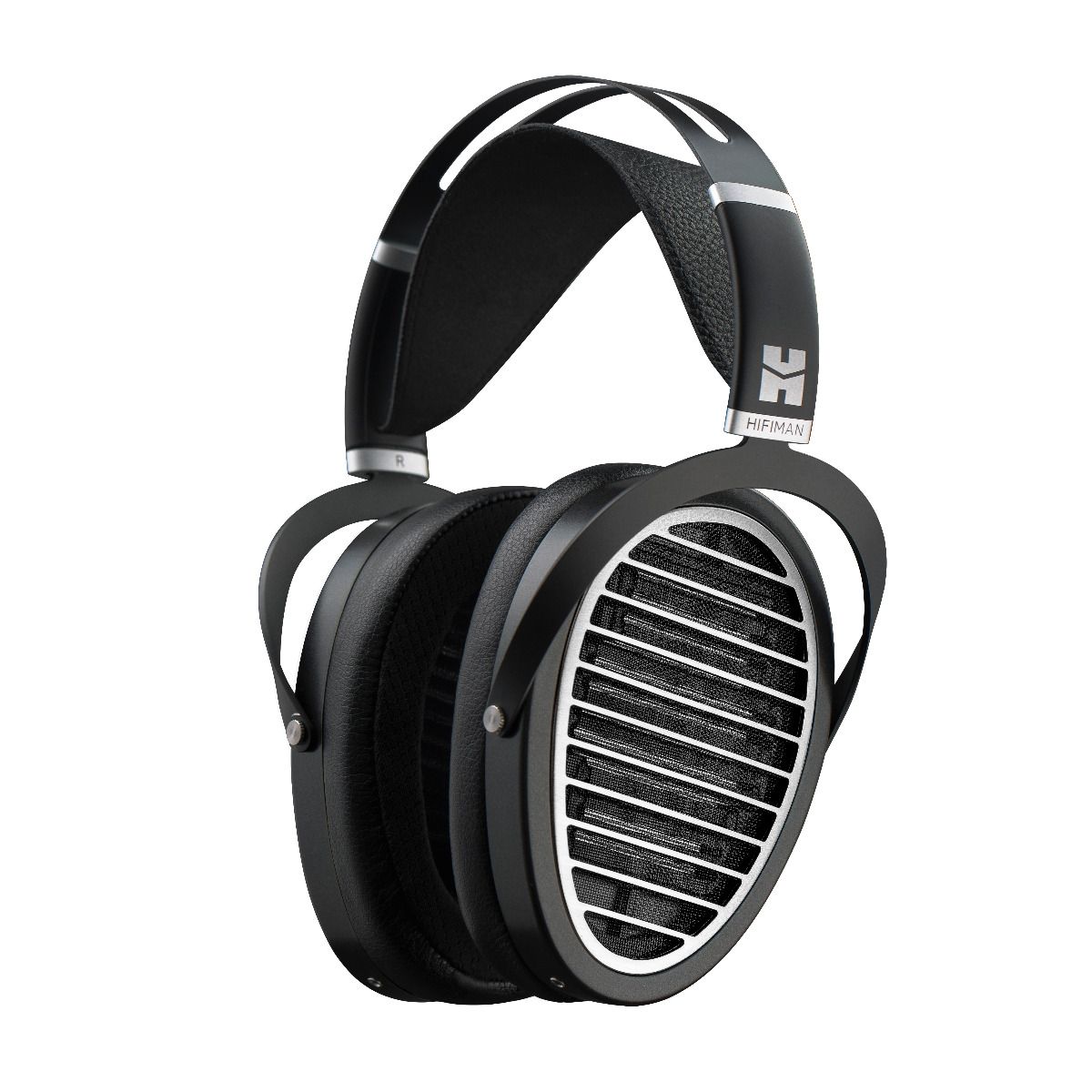 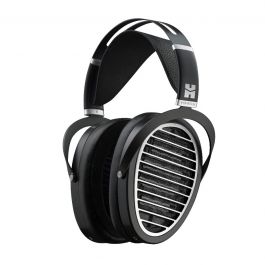 Wonder why hifiman is not advertising anything so far… They make it a silent revision?

hifi im hinterhof always has really nice deals. Got my LS50 from there for 666€

New AKM DAC chip. 64 bits, which is kind of pointless to state, but a 50dB improvement in S/R over previous AKM chips is mighty impressive. Hopefully, this translates into some good products down the line.
Also, going to a 64-pin package can become an issue for implementation. More pins are harder to route and may need more layers in PCB, which means more cost. This however can push some other improvements though. 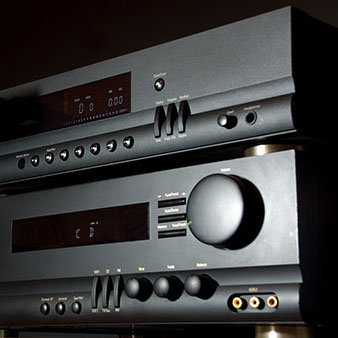 Besides the BTR7 a Fiio Q7 is also in the making. Supposed to be a M17 without the DAP features. Sounds like a contender for the iFi iDSD micro and Diablo. 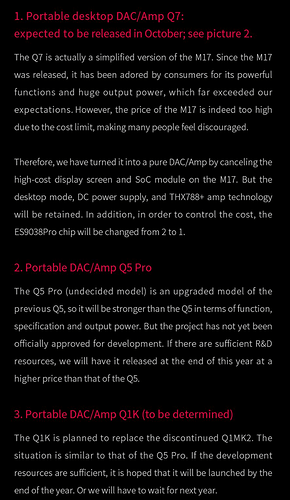