My girlfriend and I love house and rap music. I own many older speakers from Energy (RC70, Pro 22, RC 50), Mirage 390is, etc. The Mirage 390is is our favorite because the bass is in your face and makes us dance. I think I prefer a slightly warmer sound to avoid fatigue. I haven’t tried a horn I like.

I’m shopping for small bookshelves for my bedroom. I have to hide them under a 12 inch high bed-frame due to WAF. It’s the only room I’ve had to compromise on, all the others have huge speakers. Price limit is 1000$ but I want kick-ass bass!

I assume many of you will suggest non-powered speakers, I am okay with this, I have a NAD and Nuprime IDA-8 that are possible pairing options. I’m leaning towards a powered speaker largely to try something new. I’ve heard the KRK ROkit 5 G3 at a couple parties and was extremely impressed but they are older and I’ve heard a lot of great things about Kanto, Fluance, and many others. What should I get? (12 inch height maximum)

Also would getting a powered monitor with room correction help with being hidden under the bed?

Hello,
I am also looking for which are currently more passive speakers for my media room.
I could hear some of your selection on Youtube and found the bass a bit thin.
Otherwise your choise is not bad.
Have now come up with something like Quadral Phase 190 with great mids and highs but bass very thin,two much kickbass for me.
Nubert 383 quite neutral quite heavy block with a lot of bass potential but in the end too neutral.
Then I had a short listen to the Elac debut 5.2 in a shop with a fairly large open sales area, and I was quite impressed by them.
That I have decided on the Elac debut 6.2 or Elac dbr 62 and that I will come next.
I found the bass in the Debut 5.2 more natural and honest than I heard you briefly.
And also not this bass plob where you can hear when the speaker reaches its limits. I personally find that annoying. Even if it is clear that the small housing quickly reaches its limits and is far away from the floorstanding speaker.
I also heard a few active loudspeakers and found the development not bad.
I just found a few things annoying.
The separate power supply, and Dac or amplifier where omitted. For some I found the tuning not so great.
The best I’ve heard of so far have been the Nubert A200.
Overall, my heart beats more towards the Elac Debut 6.2 or the Dbr 62, which are simply more coherent in the tuning, warm and Elac typically quite high-resolution.

TUK = bass is in your face and they are on sale right now. You probably won’t be satisfied with our YU6 unless you add a sub. Keep in mind TUK is tuned to be bright out-of-the-box so take the treble down about 3 or 4 notches to get a warmer sound. Feel free to PM me if you have any questions about our speakers.

Which is your favorite? I’m guessing you’re an EDM fan?

Im everywhere, produce techno and some bass music but i listen to alot of deep dub, dubstep, electronica, i would go Kali’s or Mackie’s or something with at least a 6.5 driver, Kali’s are front ported so helps if ur against a wall 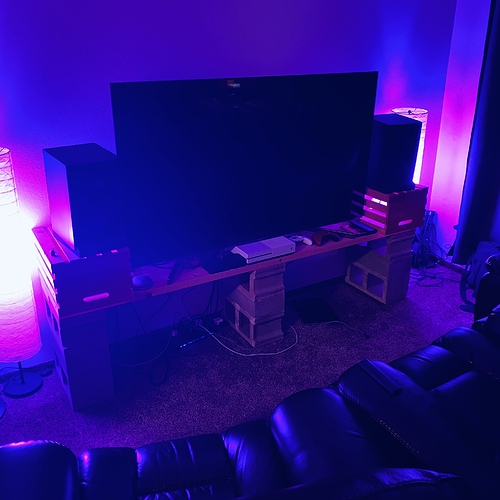 AFAIK KRK Rokit 5s actually suck for producing, because they have too much bass. A lot of producers that use Rokits say that they tend to turn down the low end when they are using headphones.

I would also suggest looking into Adam T5Vs, iLoud MTMs, Vanatoo T0 and T1. I can’t say much about iLoud MTMs or Vanatoos, but MTMs are auto room correcting. I mostly listen to techno, electro and house. I own T5Vs and think that they could use a bit more bass, but that ribbon tweeter works wonders on high end. Adam also makes a down firing sub for T-Series speakers, but it wouldn’t fit since it’s 15.4" high.

I have zero interest in producing music… The Rokit 5s bass is why I think I’ll like them. I’ve heard them at parties but that’s not my listening environment.

Do any of the speakers you suggested have a reputation for bass?

I should also mention that I have the level knob turned to about 12 o’clock on my T5Vs and I’m generally afraid to push them since I have already gotten one noise complaint, shout out to my upstairs neighbor.

Seriously considering the Tuks, mostly because the value in Canada on them is legit. You mentioned they are on sale, is that ElectronicsForLess? I want a retailer with a good return policy in case I don’t like them. I’ve never tried a ribbon tweeter before.

I can’t tell you anything about the other models you’ve listed, but I have the KRK RP5 G3s, and I despise them.

Not in terms of sound quality because that’s decent enough, but because KRK added an in-built power saving mode in the G3s that makes these automatically shut themselves off when they detect no audio being played. Sounds great in theory, but unfortunately they somehow managed to absolutely mess up the tuning of this threshold.

So when you’re sitting at your desk, 30 inches away from the speakers, or even when you’re on the other side of room reading a book on the couch, and you have these monitors playing at a low volume for background music (which is what I use them for 99% of the time), they will automatically shut themselves off every 30 minutes and you have to raise the volume to wake them up them again… rinse and repeat.

I’ve had 'em for 4 years now, and they have honestly driven me up the wall. I’ve tried experimenting with different gain levels and I’ve even contacted KRK about it, but nothing has really helped to solve this issue for me so believe it or not, I’ve actually taken my old G2s back out of their boxes so that I have a pair of monitors that don’t have a life of their own.

Sorry for the rant, but I still just don’t believe that they put these things on the market like this. I can only assume that this has at least somewhat improved in the recent G4s, so if you’re going with KRKs, I’d definitely skip the G3s.

Edit: The 5s aren’t really that bassy either. I used to listen to a lot of bass heavy electronic music back in my day, and I had to add the KRK 10" woofer to my setup because just the monitors alone didn’t give me nearly as much bass as I wanted.

Terrific points, thanks. The Tuks are the front runner, all the reviews I’ve read and watched talked about the bass.

When our speakers go on sale they should be on sale everywhere at the same time. Electronics For Less is an authorized re-seller but there are a bunch more like Ayreborn Audio, Bay Bloor Radio, Funall Audio, etc. Check out our list of retailers here:

The Tuks are the front runner

You know what, I think that’s what I will replace these yellow bastards with too.

Nothing is really going to sound that great under a bed unfortunately. Just go with loud and cheap. The more money you spend the more you will be wasting because you won’t get the full value. I personally would consider the Infinity R152 for $160 here:

Great value for the price. Not very bassy, but you won’t get satisfying bass without a sub.

But when Zeos reviews theeze and asks himself if he left his subwoofers on… you know you won’t need a sub.

Ordered Tuks from Newegg yesterday morning, no shipping notice yet. They have the longest return policy I could find. EFL and others were only 14 days.

Tuks arrived, worked for about 3 days then the internal amp died and I get no audio out of them. They are getting returned today. My newegg return label says they are going straight to Kanto.

It’s been a rough year for me and defective brand new hardware, I bought an Nvidia Shield Pro 4k and it was dead on arrival. I wonder if Covid is ruining quality assurance.

Hello,
No this is not because of that, but because of Made in China, cheaper production, mass instead of quality, selection of components as cheap as possible and so on.
That’s why you don’t do anything wrong when you find boxes from the 90s on the used market.
If you have someone to solder the crossover to a newer high quality capacitor, the coils may be replaced and a frequency input measurement is done before and after.
If you have the better and more qualitative speakers that are superior to the new ones, you will have the better and more qualitative speakers for the most part.
I have here a few old Elac El 50 MK 2 for 80 € on Ebay in top condition.
And I found someone who would revise them for me and told me that they are top speakers and were way ahead of their time.
He also assured me that after the revision I would not have to worry about it anymore.
So with 100-150€ for the revision plus 80€ selling price I have Super speakers for not even 300€.
Where you can hardly find anything reasonable in comparison to this sector price.
And in those days the speakers were mostly built to last forever if you handle them well.
YOU will be amazed if you find a good pair what came on the market in the 90s where was very good compared to today.
The only condition is that your amplifier fits where it can drive.
A Denon PMA 600 or Pma 800NE or the Atoll in 80 Se is enough for your plans.