This is the official thread for the Sony MDR-1AM2 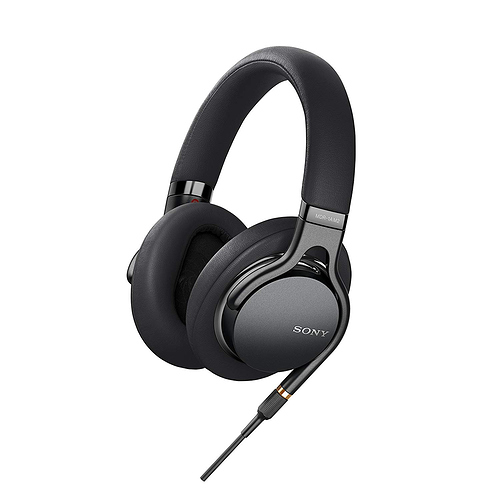 Do these really require an amplifier?

No, that’s why it says amp recommended lol. I do think using them balanced though, I think it helps them out

Oh okay. What do you find the advantages of running them off an amplifier are, assuming you have used them before?

They tighten up a bit, get more detailed, I think they just get more refined. This is using a m11 with the 4.4mm balanced cable that comes with the am2

Would be nice to have some 1AM2 owners chime in here

Found this FR graph of the 1AM2: 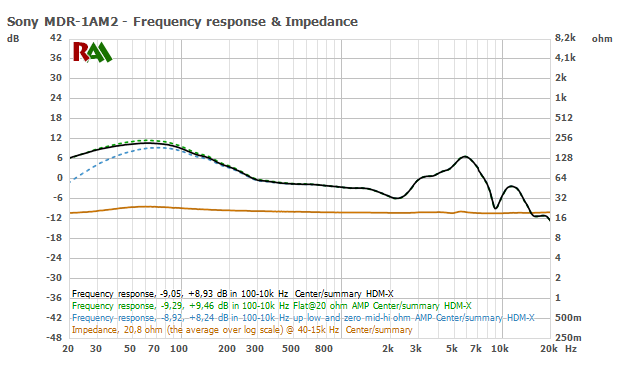 I’m listening to these headphones now.

These headphones are impressive for what they are. Especially for lower volume listening. As far as need for a headphone amp? RNHP is uncomfortably loud for me at the 9 o’clock position. Essentially take the 7506 and make it so the mids and highs are more pleasant, tone down the bass a tiny bit. On this chain of gear, these things sound REALLY GOOD. Clamping force is perfect, super light and comfy. I’ll let people know more of what I think but… for the $300 these things sound like a steal so far.

have you by chance heard the mk1’s and how they compare?

I have not, I only own the 7506’s and that’s the only other Sony product I have here. Personally I have the LCD X, Blon B20, Ether CX, and Koss kph30i I’ll be comparing to.

I couldn’t put finger on it… but I finally have the best way to describe these MDR-1AM2’s… They sound like how you want the NDH20’s to sound like with the drivers able to resolve more freely. They’re resolving without the driver feeling like they’re restrained. They’re an intimate but fun headphone. If you like the KPH30i’s but want something more of a studio sound and less fatiguing on the highs. These headphones are it.

Bass: Fat, but still resolving. Hits nice if you like EDM or house music. It hits like a dynamic should when the bass drums hit.
Mids: Clear and very forward.
Treble: Right where you want them without to be fatiguing.
Sound stage: Seems wide enough for a closed back. If someone adds some air to the tracks its noticeable.
Imaging: I’m going unrealistic here but

Only after swapping headphones a bit… I’m calling these baby LCD X’s. Which I’m not really surprised. The drivers look like borrowed tech from Sony’s much more expensive offerings made smaller and lighter. The power consumption of them make them easily driven off of FiiO Btr5 or a Dragonfly Cobalt easy. If you want a taste of what Sony could offer without being confused with their cheaper offerings.

Where do these headphones fit in a collection? Multiple places. If you want to introduce someone to hifi, this is an easy entry level step that won’t disappoint. Do you have a set of Sony’s yet for your collection? If not, you should because they are a goto for an obscene amount of recording studios and sometimes certain music recording in Sony’s only sound the best played through Sony’s. These headphones are at a price point where they don’t suck, I’ve spent more on more expensive headphones that sounded much worse. For low volume listening, a must as they really don’t seem to leak sound that much. And most important of all, these headphones are COMFORTABLE, especially given the size. I would say DEFINITE candidate for office headphones especially given their lower power.

Side note: Music and game play in Doom Eternal with these were SO MUCH FUN.

It’s an ok write up. I am just playing around and had to share since these and other Sony hear doesn’t get much love. Like Audeze I swear there is a house sound and when you hear music mixed with a Sony, you are blown away.

Honestly though, I like Sony as a brand a lot. I have trust in their products as a reputable company, and none of the Sony products I have had so far have broken down prematurely or been cheaply made.

Well… if you spend more the $20 on a pair of Sony’s it’s not bad. At certain point you can’t ask for amazing for cheap. Koss managed to pull it off with enough products but they’re an enigma.

Unless you are talking about the Sony MH755/MH750 IEMs for about $20 and $10, respectively. Those things are awesome for the price!

I’ve been though the 770 (too much treble, tight headband) and the Meze (great sound but uncomfortable), and I’ve been tempted to try the DT 177x, but haven’t managed to convince myself, esp. at the current $470 price point…

I have not had the M2, but I had the original MDR 1A and I think the are fairly similar. It was a very comfy headphone. They are light and the headband and ear pads are very well padded. They are not built nearly as solid as the DT770 but they have a nice clean look and they are sturdy enough. Speaking about the sound from memory they have a nice warmer sound signature. Not as detailed as the Beyers but also the treble is much more tame. They had a good amount of bass. Probably not quite as impactful as the Beyers but it’s pretty prominent. I don’t remember their imaging or soundstage to be stand out characteristics so I think they were probably average. It’s been a while since I’ve heard them and I’ve owned several headphones since I’ve had these, so hopefully my memory is serving me well.
Do you need a closed back for isolation? If not the AQ Nighthawks are the most comfortable headphones I’ve ever worn and you could find them used cheaper than the DT177x. You could also try to find a pair of Nightowls if you really need a closed back. Not the same sound as the Nighthawks from what I’ve been told, but still probably a solid choice.

If you didn’t like the treble on the 770’s then you definitely won’t like it on the 1AM2’s. It can get peaky (and harsh if you’re treble sensitive) at times. I’d stick with the MDR-1AM (the one with the red accents), but also check out the V-Moda M100’s if you want gobs of bass and relaxed treble.

I haven’t heard those headphones but in the end, the 1AM2’s are just a comfortable headphone. As for the comment as not resolving as well as the Beyer’s, I can’t say personally but I can say my issue with the 1AM2’s over time is the resolution just doesn’t compare with my other much more expensive stuff.

But… I do say enough artists record with Sony gear so 1 set of Sony headphones is ideal. I’d just be torn against saving money and going with the MDR-7506 (which I have) instead.

What are some similar headphones to the 1AM2 in terms of sound signature? I’m planning for an upgrade for better overall resolution, but it seems like there aren’t many headphone models for the mainstream at the upper price echelon…