I am looking at getting my storage all sorted out. Right now I have things spread across a few drives, usb sticks, and 2 daps. I want to do some centralizing, redundancy building, and organizing while also making my files available much more freely on all my PCs, and future streamers, etc. This will be mainly for music but i want to make it available for general documents, pictures, and video (i dont even know if i have videos but maybe this is an excuse to rip the old dvds). I will probably save most things locally and on the mass storage to double up. But man itll be nice to not ferry files across the usb sticks on new builds and reformats.

My biggest question is how should i go about this. I figured i would use FreeNas, put two drives in raid1 and that is that. Now i see so much integration and helper apps and addons its a bit dizzying.

UnRaid seems extremely compelling as well and i see it works a bit different, but once again there are so many ways to do this and the internet is filled with so many new but suddenly outdated guides i just dont even know whats relevant.

Here are a few other things that shape my needs:

Please guide me here or point out anything i should consider. For this i am more solution based than how to do it.

Thanks to all in advance

I run a windows box on an old I3, integrated graphics. I made no attempt to make it small, it’s in a smaller Lian Li case I had lying around.

If performance matters, Windows CIF implementation is significantly better than any of the Linux (or for that matter Mac) variants (I did this benchmark a few years ago for work), and it’s only interesting if your clients are Windows boxes.

My File Server is hardwired to my router, and most of my clients are Wifi.

You need a backup solution even if you have raid, the google data center studies pretty much showed Raid doesn’t add significant redundancy, because drives manufactured at the same time are extremely likely to fail very close in time to each other if they have the same workload.

Unless you need your data to survive your house burning down, the backup solution can be as simple as another drive in the same PC, that you backup to. So when one dies you still have the other.

I wouldn’t bother with Roon (and I’m a roon user) unless you also have a streaming service, it’s real value IMO is seamlessly integrating streamed content with local content.

I recommend Unraid. FreeNAS is on a level the overwhelming majority don’t need or want on a home server. A guy on youtube makes a ton of tutorials for Unraid that make things relatively simple and understandable.

The good thing is these all have a bit of youtube tutorials. UnRaid seems to be beaming with it as even LTT and GN Steve have recently done builds with it. GN did it with a zfs something or another. Also if its not apparent, a good part of this thread may be learning terms and what they mean in more lame language

I’ve used both UNRAID (purchased a Pro license) and FreeNAS/TureNAS Core. I’ll agree with @givemebeer that UNRAID is “easier” to deal with. Though if you start getting more advanced TrueNAS Core might be the way to go.

UNRAID did everything I wanted/needed until I started my VMware Homelab. That’s what pushed me to switch to TrueNAS Core.

Unraid all the time, just watch spaceinvader one channel on youtube and you’ll be good to go. I use plex and roon in a docker for my music, and a vpn to access it outside my network.
If you want put 2 drives as parity and your data will be perfectly safe and if you want more do a back up on the cloud with mega, gdrive, onedrive, etc

So the little things i want is to be able to have my pictures, docs, recipes available and backed up. But if that was all i would probably just grab an extra drive. I would like to grab those things where i want in house (honestly online recipes are taken down so much)

The biggest thing is my music. I really want my stuff available so i dont have to constantly drag around a drive or copy things all over. Its just centralized and i connect to it. Pc, streamers, whatever.

It looks like unraid is the first thing i should pursue. I also like its nature that i can add drives as i go as i will be starting small. I think the next step, and what ive been doing in the background is finding out how all the things i want will connect. UPnP/DLNA is on most things. minimserver, minidlna i see a bit in my searches but they tend to be on threads of “why wont x work on version y now”. Also some things support SMB, which i had no info on until just a few minutes ago.

While I am researching in the background I am very open to any guidance here. I do fear some of this may become hours searching some highly technical forum and then using someones github project that i barely understand.

Really the only thing right now you need to worry about taking into account how UNRAID’s parity system works when purchasing your storage drives. Just remember you’re going to lose one of those drives to parity so purchase accordingly.

Re Roon: i was hoping instead of Roon where it feels like there is a high subscription fee (and the lifetime is a tricky call) i would score a Nativ Vita.

Its a bit higher priced but ive seen them used for around the price of a roon lifetime sub. It seems to do a good job of having everything available on one device. It looks like choosing between streaming vs a network storage may be going out then in of some “apps” where roon may more seamlessly merge them.

I couldn’t justify the Roon lifetime sub, it’s basically 7 years of subscription, I have no idea how they are funded, but 7 years is a long time for a startup with a niche business model to be around. My guess is someone would buy them, but I also don’t know what other options will be around in 7 years, or what I’ll be using.
Their model is subscription because they have on going server and development costs for what they do with Metadata, if they were relying on one off purchase costs, I’d be even more sceptical about their business model.
They require the services they support to provide metadata, so they can match the libraries together, which is apparently the issue with not supporting Amazon Streaming, (Amazon isn’t interested).

The value is in usability and more specifically how it organizes libraries across services in an actual useful way. Exploration tools are also nice especially if you are fond of classical and want to get lists of recordings for a particular piece in a catalog.

Yes, i am watching some videos on unraid parity now actually. It looks like i may be buying more drives than i thought but they may not need to be as big for equal storage. I do see unraid is a bit more limited to drive speed than zfs, but i guess that is rendered null if im using SSDs

Yeah, you’ll be fine if you’re using SSD as your storage. I was running SSD cache when on UNRAID (and still do on TrueNAS Core) and transfers are plenty fast (full disclosure though I’m running 10GbE).

I see something noting you cant make SSDs your main array but i left some questions on that on the spaceinvader one video. But i am trying to sponge things up as much as possible

I was wondering if that was still a thing. I hadn’t mentioned anything about it because I’ve not been following UNRAID changes since I swapped over. I assumed they’d have gotten past that by now. Honestly though, you could get a couple of monster HDDs and use a 2TB SSD as cache, set the mover to auto and you should end up with really fast reads and SSD speed writes to the NAS.

As for 10GbE, yeah, supporting infrastructure is usually people’s bottleneck, but if you really wanted to go for it getting everything from eBay is relatively easy, and inexpensive. I ended up rolling my own routers, started with PFSense and then decided to move to Untangle. That’s running in an older Supermicro server with a 10GbE NIC. All my 10 gig hardware is split between a Mikrotik 4 port switch and an Aruba 2500P (has 4 SFP+ ports). Pic of the Aruba and router below (back of router is on top, switch on bottom). The 2 ethernet ports on the router are for connection to the cable modem and IPMI: 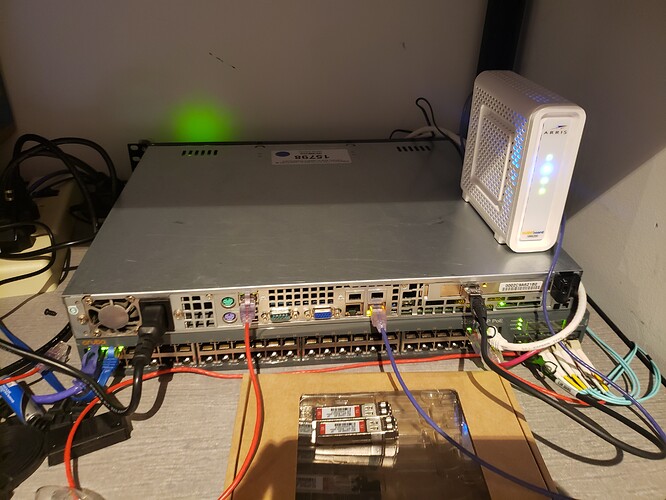 If you want easy storage expandability and overall usability, unRAID is a good option. I’ve been using it for a couple years now. I haven’t used any dockers much, but it’s generally not to difficult with the help of video guides on Youtube. The GPU you use doesn’t matter at all unless you want to run VMs or perform GPU accelerated tasks. You can probably remove the GPU and use it something else once you get it up and running.

I see something noting you cant make SSDs your main array but i left some questions on that on the spaceinvader one video. But i am trying to sponge things up as much as possible

It’s generally not recommended to have SSDs in the main array. But the current version of unRAID has multiple ways of doing SSD only storage folders.

I was referring to your recommendation of removing the GPU…

The avoidance of HDDs is two ( a few ) fold for me. I havent used an hdd in at least 6 years and when i do im reminded of why im glad i went full ssd on my pcs. Theyre just loud to me now, and i dont use that much storage where the big drives are needed and unraid should solve that if i need to add in the future when in sure SSDs will be large bois.

They also just will not fit in the case i have. The ssd sleds are easy to get to and i think i may of honestly tossed the HDD cages when i was cleaning up.

I do have HDDs i can use to set up and dangle out the side but if i use them to set up, put the SSDs in a pool, then yank the HDDs i get the feeling it will break stuff.

And yes it looks like the dedicated gpu should work ok, i saw a lot of threads saying use the integrated but even spaceinvader ones vids explain that away.

For today though i have taken allllll the music ive had scattered around and have put it on a drive in my old machine. Tomorrow i go through it all and clean up the duplicates and embarrassing windows media formatted files from my early teen years. Windows XP said it was “best” quality though!