The most stupid thing that you ever did

This week, I can say so far is that I forcefully removed my RAM kits’ heat sink each in order to replace it with an another heat sink, therefore I now have a bunch dead RAM sticks with different heat sinks, and what takes the cake is that I bought those RAM sticks as well…yeah

It was stupid of me to do such a thing but luckily I have the same spare RAM sticks that I fucking broke, therefore I still have a PC to use. Yeah, if it ain’t broke don’t fix it. So guys, what is/are the stupidest thing/s you ever did? Regardless if it was back then or today, I just feel like sharing mine because it’s so damn stupid of me to do.

Because… oh, boy I’ve got a lot of each.

There is nothing specific tbh, it can be a small mistake that lead to bigger mistakes just like I did xD (Please don’t do what I did back then for they are too many to mention after all.) or you know just a single act that only ends up in embarrassment and not financial ruin or something similar to that scale.

Cut a live power cord with scissors. Probably in the top 3.
Smaller things. Put a remote in fridge while getting something and wonder where the damm remote it is…

I’m a rather physical person, worked on my machines and whatnot, also I like to handle stuff. This leads to many injuries. LOTs of stupid injuries with my fingers.

When I was a teen, I saw a burning-red-hot brake disk and thought, “What if I touched it?” and now I have a perfect 1cm line down my right index finger that has no feeling.

Not many burns from that, but many scars.

I’m a “turn a bad situation into a good one” type of person, so this is give and take.

Short wrap up of it all: Worked and lived in Japan, decided to move back to the states after my contract was up.

Twist: Dated a Japanese person after I decided this, we agreed to keep it friendly/playful… but it became more serious than we thought due to chemistry. Kept to my plan until the night I was due to leave and we both broke down. But they told me it was better for me to go home.

Reason: I wanted to enter a new career field, and couldn’t get the proper schooling/time in Japan due to visa stuff. Either work in Japan or study at home. So I returned home, we went long-distance.

Kicker: This was last August, in the midst of Covid. So we’ve been this way for a while. But I did break into one career field, and have been studying/learning to get into programming for a while now.

Good parts: With my connections, savings, and unemployment, I’ve been able to thrive quite well at home to prepare myself. Learning programming to break into the web development field, which is big in Japan and with a spousal visa (via marriage, which is a given now) it’s easier.

Bad parts: Covid, still. Japan is very hesitant to open borders, which is totally reasonable and I’m glad for them to be more cautious to keep my SO and my friends safe. Still just a waiting game. Japan’s programming field doesn’t pay as much, not so many remote jobs (very Tokyo focused), and there’s slim English-only jobs (my Japanese is conversational, but not exactly job-ready).

Dumbest life decision i made was jot going military after college. They offered me more than I made at my first job, I would have had 0 expenses, and they would have paid off my studen loans for 2 years of office work (im an engr) wherever they sent me. It ended up fine cause I got dumb lucky but that was a very dumb choice to have made

Here is an another stupid thing I did, I mistaken salt for sugar while adding it to my coffee, and god the coffee was damn salty for me even to drink it. Also I have mistaken my Topping NX3s for trash because I threw it in the bin without even realizing out, now I had to like dig through the bin to get it again, with my hands pretty much tainted, it sucks xD.

Yeah to be honest working in a place like Japan is very difficult, also the work culture there from what I have heard can be so overwhelming that it’s not uncommon for couples there to cheat on each other since there are so many husbands/wives that are so absorbed to their jobs that they cannot pretty much do anything lovey-dovey or private time to one another. Another one what I have heard is that there is this thing in Japan, that after work, you need attend to a drinking meeting where you need to since it is a way to please your boss and not given that “look” by your workers, not much of a help since those drinking meetings are not getting you paid, for it’s basically a mandatory meeting that should not be mandatory in the first place.

I could ramble on about what my Japanese friends have said and asked about America, the same you have.

The grand answer: It depends. It always depends. I know half a dozen different ways to say “It depends” in Japanese to combat this.

Work culture is different, not exactly difficult. And it ultimately depends on where you work and what industry. The difficult part is making your job look hard and tiring, when it’s not.

Cheating, it happens. Probably the same as America, but it’s a bit more open and just “put up with” instead of shoving someone out the door. Debatable if that’s better; a few married couple I know handle it for the sake of their children. Why not avoid the issue over a dead bed and just let your married partner do whatever within reason so long as it makes ends meet?

I will say the “live for work” lifestyle is more prevalent for some. But I think this is more due to the extreme focus on work from childhood through adulthood. Again, depends.

Drinking parties are a thing, and they can be expensive. They can also be great fun and one of the best ways to establish relationships. Think about it: Would you rather do a potluck in the park in America, or get fucking smashed with some guy in accounting you thought was a total loser and learn he’s one of the most interesting and wildest people you’ve ever met? Personally, I didn’t go to many as I often had plans of my own, but they are an experience.

Remember this: Viewing other cultures is seeing encapsulations of generally negative aspects of a culture, and we often compare these to our culture we deem as “better”. These things are true in many ways, but often not as common or unique to the culture as many people think.

Yes, that’s true. Not entirely what I said about it is true. I mean it’s not only Japan tbh, it happens to every place but we don’t know it happens since we’re too focused on our things to give such care to matters like those.

Since this thread exists, I’m going to tell y’all about the experience from a guy I have met in a offline audio meeting a long time ago. He has a very young daughter (age 5 iirc) who mistook his expensive headgear as “pancakes” since it was his favorite food and usually compare to it, put it in the fridge overnight. He found out the next day and you guess it, it’s gone forever. The man didn’t even mad and still displays it in his own garage.

Oh and my own stupid experience related to audio: Forgot to take out the first IEM I bought within weeks from the jean and threw it in washing machine without checking.

Freshman yr Uni - had this obnoxious wall mounted lamp hanging over the single bed in shared dorm I kept hitting my head on. While removing shorted on tool and ended up blowing out the system of 4 dorm buildings… No power for 2 days for 500 + students and the dorm cafeteria

No one ever found out it was me …

Oof, this is why I always double check my pants before throwing them in the washing machine, are those IEMs still alive today or is it now dead? Gotta’ suck if it did died.

They survived, it was the blons.

Although I have better sets to listen to, I still put it on a hanger to display it. 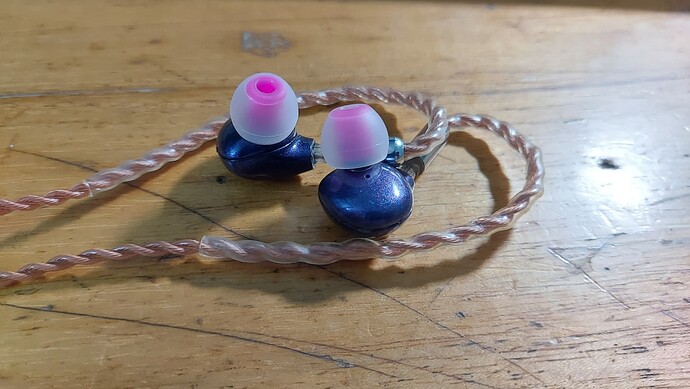 My photo skills suck ass, so

Ooooh nice, also LOL we got the same BLONs and the same ear tips! What a coincidence.

Turned on a power amp before plugging in all the cables feeding it with audio.
TRS (and TS) on insertion, short out various parts to various parts… Combine with over 1kW in brute force for massive BWAAAAAAAHT!!!

Perfect alarm clock right there, also a risk of blowing your ear drums out xD

I just graduated from Uni. The factory I was working in had a problem with a motor starter. I had to diagnose the problem. Without power, everything seems good. I feed power and then decide to remove the cover to use the multimeter. A cable was loose and stuck to the cover somehow. Fireworks! the cable touch the housing (Grounded), a big flash that illuminated the entire room! . I fixed the problem afterwards. Everyone was looking at me like “noob”