Ah so it’s a more budget version of the existing amps. It’s got hard competition from the atom and heresy if they are aiming for the 100 usd mark which I would assume they are

It has a dedicated button for switching to the preamp out. I wish that was a more common feature. I normally just leave my headphones plugged in unless I’m switching them.
And it looks like has greater power output than the 789 single ended out.

I think they swapped the numbers at 16 and 32 ohms. Otherwise it has twice the output at 32 than 16, and would make more powerful specifically at 32 ohms than the 789. Which would also undercut the price to performance level they are going for by being too competitive with the 789 on paper.

The 789 also has balanced input/output, something that tends to add a good chunk of change on it’s own

Is balanced audio even worth it? doesn’t the THX tech compensate for it?

Not sure. Apparently the new amp also has more power at 300 Ohms. 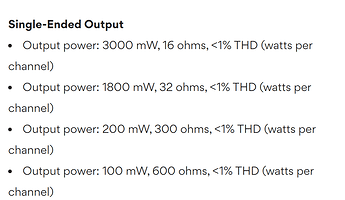 Is balanced audio even worth it?

In the budget realm no imo. You can get just as good single ended performance as you can balanced if the designer designs for single ended

interesting, will probably buy one for my work desk.

The only advantage of balanced is more power for harder to drive stuff, at least with thx tech. If it’s ez to drive then won’t hear much difference

funny…rather than complicate things with the circuitry for balanced out put…why not just add a gain switch? lol

On both units already

And apparently I got a 10$ reward from Drop. I don’t even know how, lol!

now if they could release a good dac to stack on top of it.

Airist r2r if it ever comes back? Seems like it would stack nicely

That form factor though. Feels like the feet is as thick as the body.

I already actually own one for my Massdrop 789 but the R2R was marred with QC issues and controversies about copied tech. Would be nice if it came back but I don’t see it coming back.