Was over at the Darko site. he says a USB SPDIF converter. Improves sound in some DAC’s:

“essentially it’s down to a combination of re-clocking – that erodes phase-error inducing jitter – and (some degree of) isolation from the host computer’s noisy USB power supply. In short: re-clocking and power supply. Clocks and power.”

When to use a USB to S/PDIF converter? | Darko.Audio

Not all DACs benefit from external USB-S/PDIF converters. It'll depend on the (re)-clocking and power supply of your DAC's existing USB input.

Is this true? if so how big a improvement is it? Would it be a good idea to use one with a SU8 or D10?

7 years ago.
Wondering the situation now.
Also: Why not just buy gear with needed and decent connections on good dac at start and not fiddle on the way?

It can make a difference, it’s the reason some people prefer spdif on some DAC’s.
The differences are marginal on most DAC’s.
It certainly isn’t really worthwhile on something the price of a D10 or an SU8.
In fact I’ve seen the D10 recommended as a USB to spdif converted since it has spdif out and runs entirely off USB power, so it’s electrically isolated from the actual DAC.

If your spending 2K on a DAC, you probably try it and see.

Whats a good cheap USB to SPDIF converter i could buy?

Schiit sells one, though it’s EOL, because their higher end DAC’s now have electrically isolated USB solutions and with unison I believe they also have multiple clocks to better match the difference between the 44.1K and 48K base clocks.

hmm. I wanted to try the enog dac. but i cant seem to find a reasonably priced converter

The Schiit Eitr is still available for $100, you could also use a D10, but for something the price of the Enog, I’d just run spdif out of my computer motherboard.

I dont have one

Doesn’t Zeos use the Micca Origin to convert USB to SPDIF?

I think this is the one he uses. 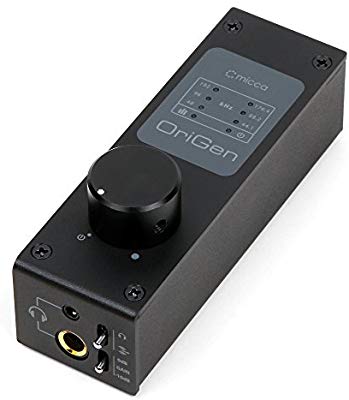 At around 15 minutes, he explains how he uses it for USB… then converts it to optical spdif for all his other DACs.

If memory serves correct. Z wanted the Origen so that there is only one device and one driver that works and no other devices/drivers are needed. Plus the multiple and multiple amps/dacs he uses with signal splitters. Same source and songs, same times on different devices.

He has or had problems with his pc and different drivers.

yeah, that’s what he says in the video. Exactly. Micca is the only USB device with drivers installed on his laptop. Then he uses the Micca to output a SPDIF Optical signal to a splitter/repeater… which he can then send the digital signal to multiple other DACs

he uses the Micca to output a SPDIF Optical signal

This is what i dont get. It has its own DAC. and a pretty cheap one at that. Isnt that gonna change the sound? before its gets to another DAC? Also its 100$ kinda expensive for a adapter. Mon said i could find a converter for 50$ i was hoping i could find one even cheaper. But every time i do it has its own shitty DAC.

cheap soundcard with spdif out

I use a laptop. Dont have a desktop

I use a laptop. Dont have a desktop

This is what i dont get. It has its own DAC. and a pretty cheap one at that. Isnt that gonna change the sound?

Proper or good functioning DAC’s that have digital output. Signal should always be in digital mode, between digital devices (Without any signal changes or reclocking etc.) -> until the final dac or amp when it need to go analog.
It does (should) not change the audio, sound or signal. Just ones and zeros nicely in line between devices. Audible? Maybe.
It should not change from digital to analog, then send it forward from analog to digital then there might be small changes. Audible? Probably…?

Origen 2
" OriGen functions as a USBto-S/PDIF transport and does not perform any signal decoding or volume control function."

Whats a good cheap USB to SPDIF converter i could buy?

It has an XMOS U8 chip handling your USB and it is pretty isolated for what you are looking for.

It was Plug N Play for me. It is what i got for when i get my Enog2 or need Optical out of my laptop since it doesn’t have it built in but i would not use SPDIF/TOSLINK from a laptop directly anyway.

You are just passing along a digital signal, I don’t see an issue, you aren’t using the laptops dac or something. But jitter could be a concern

Proper or good functioning DAC’s that have digital output. Signal should always be in digital mode, between digital devices (Without any signal changes or reclocking etc.) -> until the final dac or amp when it need to go analog.

SPDIF has no clock/time signal, so it relies on the signal being sent at the right rate, that’s why more expensive DAC’s have reclockers, they take the incoming SPDIF signal, buffer it, then re-output with reduced Jitter.