Where do people get their FLACs?

I want to listen to music as best I can now that I’m pretty deep in on gear, so I was wondering where I should go for the best (preferably free but cheapest is good) FLAC files to really get my feet wet with the higher quality audio recordings. Of the FLAC files I have listened to I never get weird buzzes and pops but listening even on Tidal I hear weird poppy clicky noises occasionally that I don’t hear on YouTube videos ever so I’m wondering if it has something to do with my source or what it could be. I wanted to try out FLACs to see if I’m just hearing the compression or what the case may be.

Do you use USB for your DAC? If you do try another cable or experiment with the usb drivers (USB can be a b****)

I do uae USB on my Jotunheim balanced DAC. I’ll buy a new USB cable and try that first, thank you!

Qobuz subscription and a downloader. Unlimited flacs up to 192khz with digital booklets and art for only the cost of an album every month.

What is the downloader that you use? That sounds like the type of thing I could get behind.

is piracy against TOS here?

FWIW I put my phone on the opposite corner of the desk from my Jot after looking on Schitt’s website and it hasn’t done the thing so I think my phone was interfering with the signal. I have a bad habit of putting my phone all over the place but now with that little piece of advice I read I’ll be more conscious about it.

I get most of my stuff from Bandcamp and Beatport

Make no mistake, pops and clicks are not a fault of the format. Even very low quality MP3s don’t introduce such artefacts (they just take away stuff, not add extras). You hear extra clicks and pops because of either of these 2 possibilities:

The 2nd case is far far more probable, I have heard it many times. I usually need to de-clip music using Audacity, but it doesn’t work all the time as that information is lost forever.

I use p2p sharing sites such as soulseek

I usually rip CDs for my FLACs, or stream TIDAL. WiFi/Cell signals can introduce some of the pops and noises you describe, so I make sure my DAP is offline with used with an amp.

I get my FLACs by ripping from CD using XLD, CUERipper or dBPoweramp.

I usually rip CDs for my FLACs

I’m kinda noob on the formats, but ain’t the CD quality “inferior” to FLAC (lossy, idk)? I’ve ripped somy CDs for FLAC, just because my entire library is in FLAC and the OST was only available in CD, but told myself it was “placebo”.

CDs are .wav, .flac are actually slightly compressed versions of that, and only remove “empty space”, making them slightly smaller with bitrates from 850 ish to 1400 ish. (Not an expert, just self taught, and these have been my conclusions.) CDs are 16bit/44.1, and there is a huge debate whether anyone can hear beyond this range. Personally it is enough for my middle-aged and highly damaged ears.

I’ve bought a few albums on HDtracks.com but most of my FLACs are ripped from my cd collection. I ripped all my albums once before to .mp3 192-320kb/sec (vbr) ages ago, but last year i re-ripped all to FLACs. I did have a few albums that had gotten unreadable though (CDs bought in the early 90s, so i guess age is a factor), so i had to rebuy a few of them. Sadly the new version had in some cases been “digital remastered” and compressed to get louder (ACDC - let there be rock as a prime example, the waveform in foobar is almost a solid wall on that one).

Buying new music i would really love to get FLACs, but not sure where prices and availability is good so i guess CDs is still preferable, but i must admit i have bought quite a few albums on itunes for the convenience of getting it instantly in a digital format i can copy to my computers and phone at once…

If you have a CD but it has errors ripping, there is a chance the FLAC can be repaired using CUETools (http://cue.tools/wiki/Main_Page). I get a lot of used CDs and lots of them have scratches that would leave me with an imperfect rip otherwise.

I’m kinda noob on the formats, but ain’t the CD quality “inferior” to FLAC (lossy, idk)?

Most FLACs are CD Quality. When hard drives were much small than they are today, it was the only practical way to store lossless copies of a CDs.

I will try that once i have the optical drive attached again. The CDs surface was not scratched though, looked very clean and pristine, so i guess the problems is in the data layer and not surface scratches.

One CD (iron maiden - fear of the dark live - cd single, seems to have self destructed with the surface looking this: 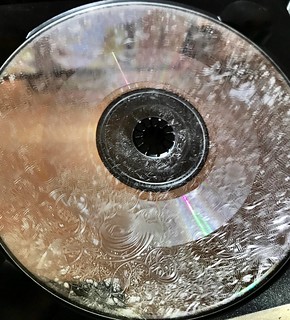 (sorry for the image quality, iphone didn’t seem to manage to focus correctly on that reflective surface…)

None of the other CDs had similar damage, and all the CDs have been stored in the same shelf for the last 20+ years, so no clue what hapened to that one

The important thing to keep in mind, (contrary to what some people have alluded to in the above posts) is that just because it is in flac, does not mean it is better than a CD. Flac is a format, simple as that. The intention of flac, (which stands for free lossless audio codec if you were wondering) is to exist as a format free of any licensing requirements that allows for a somewhat reduced file size, but that maintains the full integrity of the original recording it was ripped from. When accomponied by a .log and .cue (heck, come to think of it maybe the .log file isn’t even required) the original audio can be reconstructed. But sometimes people are idiots and convert lossy formats such as mp3 into flac because they are idiots. Also, is it not uncommon for even the official publisher of the .flac (such as bandcamp) to release a .flac that is from a lossy master. It seems especially common with the soundcloud artists.

Having said all of that, .flac is awesome. There are some great sites that enable sharing of .flacs where the intention of the site is to only have legitimate files. But moderation of that takes a lot of time and effort, which is community driven.

One of the main advantages for .flac is that it’s a standard format that you can reliably use for archiving. If you don’t need the full lossless audio (such as to store on your phone or DAP) you can encode some mp3, ogg, alac, or whatever other formats exist in future from the flac. Think of it is a more efficient way of copying the cd in a raw format (which would be .wav)
TLDR: Just because it’s a flac, doesn’t mean it’s perfect. It just means that it CAN be perfect.