The sale only lasts for another 5 days so I have to be quick about my choice.

But on paper this seems like a great deal, 7.2 channels, Dolby Atmos, 8k passthrough. As well as a bunch of quality of life features that I’d make good use of.

Right now my 4k TV doesn’t even support HDR but if I got this receiver i’d definitely be looking at upgrading to it.

My main reason for wanting to upgrade at all is the lack of HDCP 2.2 compliance in my receiver, so at this point I’ve been getting by with a compliant HDMI splitter for my firestick and two separate HDMI’s coming from my PC, both scenarios of which, come with their own set of issues and annoyances.

The only other reason big reason I’ve considered upgrading from my receiver is for Dolby Atmos functionality.

All the other reasons are minuscule like support for streaming Tidal, bluetooth capability, etc.

But this Yamaha seems to tick all the boxes for me!

The only thing that worries me is if there’s an underlying reason for what seems to be a great deal.

Is there any reason I should stay away from this receiver?

Is this really even that good of a deal? or are there other options with the same features for a similar or better price that I’m not aware of.

Here’s a link to my ongoing set up configuration thread in a few different places:

What am I doing wrong with my set up / Whats the biggest...

What am I doing wrong with my set up / Whats the biggest bottle neck of my set up? General HT Discussion & Setup

This is gonna be a long post because I’m gonna try and put in as much relevant information as I can but I’ll try my best to keep it structured and succinct. I’ll start with as much relevant information I can think of before getting to the actual meat of it. Setup: TV: 55inch 4k Sceptre LCD Receiver: Denon AVR X2000 connected as 6.2 channels Fronts: Klipsch R-14M Subwoofers: Left-Klipsch R10SW / Right-Polk PSW10 Surround Sides: Velodyne CHTSBV Surround Backs: Sony SS-B1000 Fronts are on s…

r/hometheater - What am I doing wrong with my set up / Whats the biggest...

I’m not sure if the Yamaha is an upgrade over your Denon. Specs seem mostly the same: your Denon outputs 95 W in 8 ohm, the Yamaha advertises 100 W (guessing also into 8 ohm).

I’d pass for one reason: the Yamaha doesn’t support height channels. It doesn’t amplify them or have pre-outs for them. Dolby Atmos & DTS:X are slightly better for correcting placement errors in a home theater setup, but not having the option adding their biggest appeal (3D sound) is a major letdown.

if HDMI passthrough is important make sure the chips used are cabable of true 2.1 with uncompressed signal.

for “future-proofing” eARC and full-speed (48gb) hdmi2.1 would be a minimum and i heard it could be 2022 before new stock is available with the correct chip

Ok I just bought the receiver and am trying to set it up, but what you mean it doesn’t have height channels, I thought that’s what atmos was, I feel like such a noob now what did I just buy lmao

I’m having trouble setting this thing up, menus aren’t nearly as user friendly as the denon but I’m sure I’ll get used to it
I do wonder though, do I have to set up my atmos channels in the way the manual states? Essentially above my front speakers?
I’d rather just put them on the ceiling to my sides pointing down and I feel like that would make more sense too

Since you have 4 speakers on sealing. Correct? Front and back.
You kinda have 2 channels less than what is needed for upper surround to work correctly, like it should and the processing is done right.
Amp should support 5.2.4 configuration or 9.2 or more.

That’s what Aldarrin probably pointed out.

The 6.2 setup with 4 surround speakers is bit strange if they all connected. 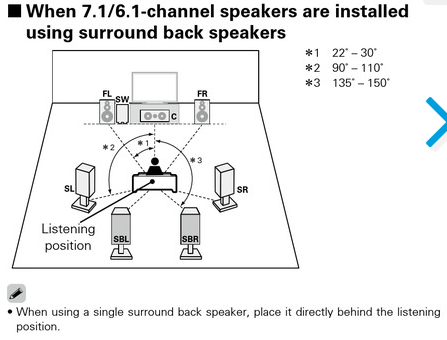 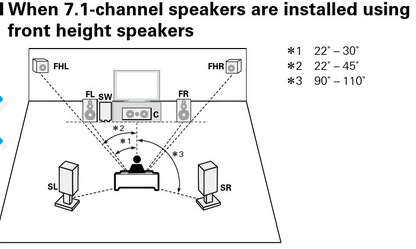 The two side speakers on your ceiling will be your atmos channels sorry to tell ya but you got to climb back up and mount the speakers in that position and your side ch which you mention you brought down from the ceiling are now your back ch. In the menu go to setup than layout-front presence select “middle” run ypao and the reciever will detect youre running atmos. Also go to amp assign and choose “basic.”
Youll understand after you run YPAO.

Its a new setup we all go through it. Wecome to atmos. Hell your setup is more within spec than mine. Im only on wall not on ceiling.

Sweet thanks man, I’m trying to figure out the best place to put my surround speakers if my atmos speakers are gonna be hanging on the ceiling where my side surrounds would be, right now I got the left surround on a foam block on my desk, and the right surround on a speaker stand pushed further back, it takes up a bit more space than I’d like it to though, so maybe I’ll hang my surround channels on the wall just a bit higher than ear level?

its hard to decide but i’ll run the ypao again and see how that goes, thanks for the help with the settings, I gotta admit, it is quite unintuitive coming from the Denon.

I know this may sound stupid and I think I remember hearing that running 4ohm speakers, on a receiver rated for 6 and 8 ohms, can damage the receiver.
And I did find this on Yamaha’s website:

but I had two more velodynes that match the side surrounds, one of them had a damaged woofer though, so it sounded horrible. But the matching velodyne center channel was just laying around, and I realised it uses two woofers exactly the same size as the surround speakers, so I swapped the woofers out of the center channel and two surrounds.

I realise I should have done more research before swapping woofers around in my speakers but i’ve only used them on a cheap bare pcb amp I got off amazon for 20 bucks, reason being was that I was worried the speakers might damage the amps in the receiver.

Play with the setup, speaker placement is *Recommended long as YPAO isnt sending back an error reading find what is the best placement for your room.

As for the ohm remember zeos mentioned should be fine although might not get full wattage. Also the link you gave indicates you can run 4ohms, think its fine. 2 4ohm might double to 8ohm ?

Sure someone will chime in.

so im guessing this makes the surrounds 4ohm each, and the center channel 16ohm
fine to use those frankenspeakers I made

If you have or can borrow a multimeter, it’s easy too the ohm load or resistance.
Until that. I would not use them.
But if something goes borked, then can look for 9.2 or 11.2 receiver.

In the link it only says front channels are supported for 4ohm, and I intend to use them as surround or atmos channels, so I’m not too sure

Im a little dissapointed about the whole 9.2 deal, I guess I hoped it wasnt as substantial of a difference, im about to find out though.
It almost feels like this receiver totally could have the ability to run in 9.2 or 7.2.2 it has front L&F preouts so it doesn’t seem like a physical design limitation
Maybe with a firmware update?

Basically it might do it? If the processing and coding power could… but they will not give or make a firmware so it would do so. lol
That’s why they have different receivers for different purposes. This is for 7.1 usage.
Would be easier somehow to get everyone you meet, give you 20$. For no reason.
But that might not happen ether.
TSR-700 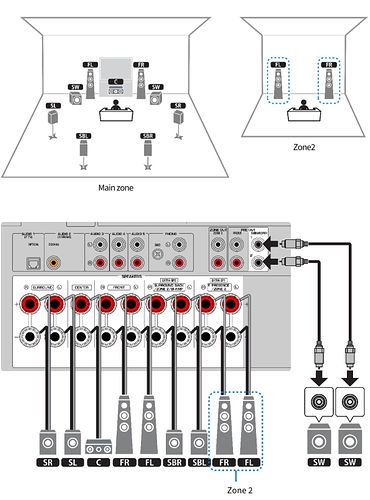 If you enable everything. The “upper rear surrounds” or Zone2 will not play the surround effect, it should be playing. You would have front speaker audio, coming from sealing back surround… and that ain’t the thing.

Right i see. Micca covo-s $59 throw them up there. Got a pair for test speakers they have a mounting hole in the back. If you do score the miccas maybe not turn the level to +9 think i burnt mine from doing that.

Micca OoO are MTM 3in speakers with mounting holes $79 renewed but out of stock on amazon until march. Using these for atmos now, they are a good alternative to buying atmos speakers like the SVS or klipsch. Speaking of klipsch R41 is going for $89 use the sonys for atmos. Shaping up to be a nice little 4.2.2 setup.

Dont think higher than ear level is too much of a problem. measured wrong on my speaker mounts for back ch. Its 2ft above ear level

. In fact remember hearing on a podcast with the trinnov engineer that little above ear level is acceptable to compensate for mutiple listening positions when configured in a HT in two or more rows.

Try the zeos method and flip the speakers upside down.

To answer your question about what Atmos / DTS:X is, it’s more than anything an object-based audio system. Instead of just having audio streams for each channel, sounds are encoded with positional information; make the sound come from X amount behind, Y amount to the left, Z amount above rather than Surround Left and the processor will mix the sound accordingly (it’s fucking neat). That’s what allows them to use height channels (or if you want a stupid amount of speakers in a system). For the content that out there (stereo > 5.1 > 7.1 > Atmos > DTS:X), you get your biggest improvement improving the perceived positioning of your speakers. The same 3D sound processing that enables height channels also allows it to adjust volume and timing to the various speakers to account for less than ideal setups (like it can send some sound to other speakers to make up for positioning errors, delay sounds sent to speakers placed to close to the listening position, etc). It’s kinda like keystone adjustments in a projector; never as good as a proper setup, but a fuckload easier to deal with (and for some rooms unavoidable). Use the YPAO auto-calibration in your receiver and it’ll make the sound blend much better; you’ll have more of a sound stage and less of sounds obviously coming from this speaker or that.

Another thing ive heard in a podcast, the rep from trinnov mentioned for HT you want to use a coventional speaker for the surround channels in a atmos system indstead of dipole-bipole-“surround” speaker. You want discrete directional sound from each speaker and not the traditional dispersed non locatable channel for surround sound. For the atmos channels you want a speaker that can point the tweeter to the listening position.

IMG_20210204_0228571846×4000 2.31 MB
Before I actually had atmos, I used the atmos demos as my reference media for 7.1 (6.2) and I gotta say, although there is definitely a lack of sound behind me, it still does make it feel like sounds are coming from behind me, just not as profoundly.
Which makes me wonder, if I had left it as my old set up in the traditional 7.1 configuration, would it still do the atmos decoding when I play media with an atmos track? It would mean that the receiver would be set to 7.1 as opposed to an atmos configuration, but since my surround speakers are all on the ceiling, would it still have an atmos effect?
next page →