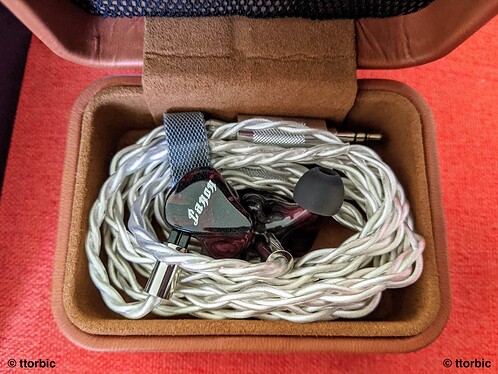 Context
I had been eyeing an “end-game” set for some time before taking the leap and purchasing the Canon (note: end-game for my budget). I really enjoyed the Aladdin, which is a 1 DD + 3 BA set, but felt it was time to upgrade. A shout-out to @rattlingblanketwoman and @hawaiibadboy who took the plunge before me and shared their impressions with the community. When I received the Canon, I had already sold my Aladdin, which is why I am only including comparisons to the Olina (with some against the S12 as a bonus). 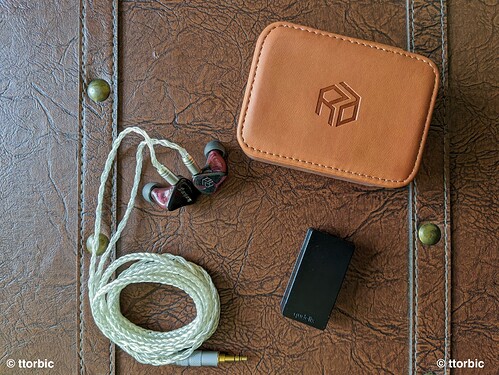 General impressions
The Canon has 3 tuning switches per channel that actually do something (~2-3 dB increase; check out HBB or other people’s graphs that I shared in this post: 🔶 Yanyin Audio Canon - #2 by ttorbic). This means there are 8 different combinations to choose from, which is a great feature but a nightmare for reviewing. For the sake of my time and simplicity, I have settled on 010 (so mids boosted) for the rest of the impressions and comparisons. Why? I found 000 to be fun but a little too much bass for me - female vocals like Adele and Agnes Noble were slightly recessed when the songs had drums/guitar tracks. It wasn’t always an issue, but personally I prefer 010 for general listening, and 110 if I want a more fun bassy sound.

Overall, the Canon sounds amazing. Bass extends very deep, has excellent rumble and impact, and has a great organic sound. It’s not fast like planars, but it adds musicality to the bass. Mids are forward with 010 tuning, no issues there. Treble is also well-extended without any sibilance. I wrote down two observations over and over again:

The Canon has a decent stage, but the sounds are dense within that volume - good note-weight plus good imaging and layering bring out intimacy (from the vocalist) yet nice reverb/echo and placement of instruments. The Canon sounds like it has Oxygen-like bass (note: I sold my Oxygen prior to getting the Canon, but I do have the Olina and am basing my thoughts on the extensive A/Bing I did with the Olina and the Oxygen), and imaging that is better than the Olina.

I couldn’t find any faults with the timbre apart from the upper registers of the violin, which sometimes sounded a bit plastic-y. I don’t know how obvious this would be to others, so YMMV.

Detailed impressions with songs & comparisons with the Olina and S12

Brief comparison against the S12

Conclusion
It’s difficult to find faults with the Canon because it is better than anything I’ve listened to until now. Sure, I could try to compare with my Sundara, but that will really be apples to oranges! So based on the IEMs I have and my music tastes, the Canon is excellent. The tuning switches make the Canon a great all-rounder - I can essentially apply a hardware-based EQ to fit my mood. More bass? 110. More mids? 010. More treble and air? 001. Yanyin knows how to tune, so you start with a solid foundation, then you can customise to your tastes - what more can you ask for? (I mean, you could upgrade the individual components and throw in more drivers maybe…but not sure I need to one-up the Canon for a good long time!)

As always, thanks for reading, and happy listening 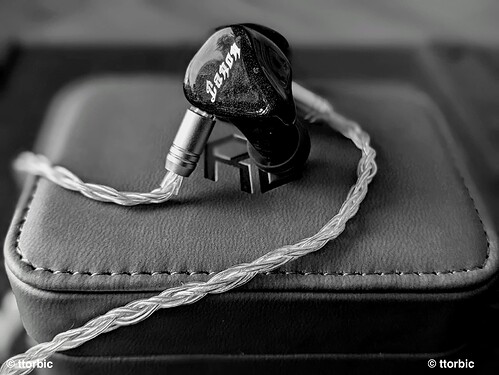 A lot of work, great specific examples well done! This is going to be incredibly helpful to curious buyers.

Awesome job! Would say the Olina complements the canon in any way or does the canon just win out in every category?

Yeah I would list the following pros for having the Olinda:

So do you notice a coherency and timbre difference? I’m pretty much looking for the Olina with more resolution and detail and not sure if that mean hibrid/tribrid or if I can get that from the Serial (current top choice)

I can’t hear coherency issues with the Canon. I guess that’s a combination of the Canon being a very good IEM and the fact that I haven’t heard a terribly implemented hybrid.

Timbre? Yes, a little bit, but i’m being fairly nit-picky here. For some tracks with the violin, I can say the upper register sounds a bit unnatural. But YMMV - I suspect many won’t hear any issues. Also, bear in mind that I really have to be critically listening to discern minor differences in timbre between Olina and Canon. There are much more noticeable improvements in the Canon: bass quantity and texture, note-weight (as a by-product of that bass), imaging and layering, and cymbals. I picked up these differences immediately when I first listened to the Canon.

In terms of Canon vs Serial, well, that’s a tough call, and there have already been some posts by @MMag05 and @rattlingblanketwoman who have or have had both. @hawaiibadboy has both but I think he’s still working on a review where he compares Canon vs Serial vs other hybrids. 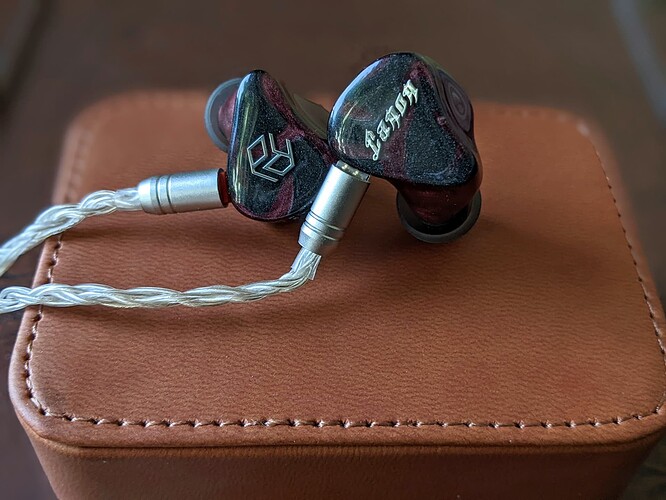 Did some tip rolling on the Canon today. Don’t really have many to try other than what came with other IEMs. I knew my issue would need a wide bore tip seeing the treble had a bit to much of something. Super happy to say the tips that came with my Urd have resolved my issue with the treble. Any idea what tips these are or a very similar one?

This new discovery has now gave me full love for the Canon. Seeing tips fixed my issues I’m inches from blind buying the Moonlight. 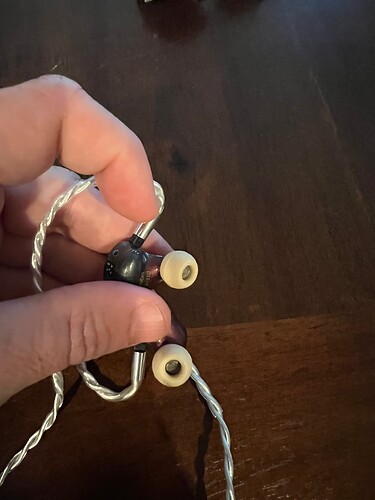 Oh nice, so it’s not timbre but a treble peak somewhere!
Can you post pics of just the tips, side and top view?

Oh nice, so it’s not timbre but a treble peak somewhere!

They can be related, not just the speed. It’s also a reason why some darker iems pass through the rain drops timbre wise. 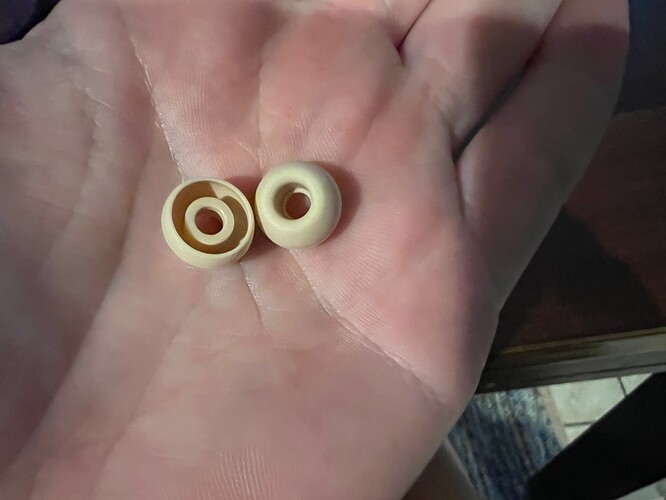 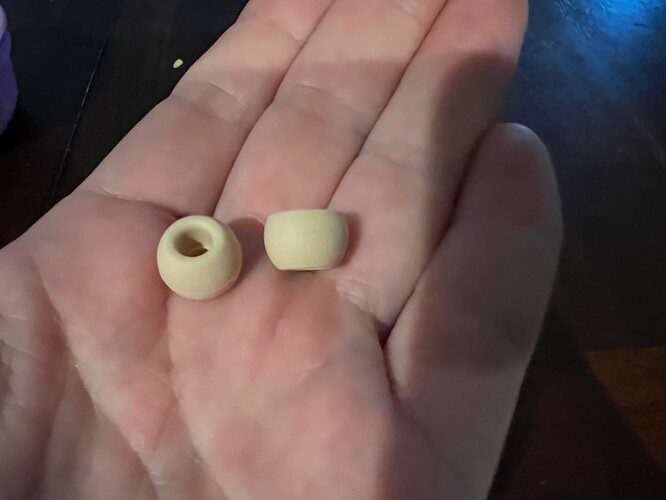 Lol I knew this would happen I tried bgvp tips ,not the ones NYMz loves but bet they work on Canon, but the EO1s on timeless and suddenly it had note weight and details. Imaged better and I already liked them. Tips can be huge.

Dang I have no idea what these are. @nymz @Rikudou_Goku any thoughts?

Just to add:
Sadly the Canons suffer from driver flex. Both channels sound ok when inserted, but if I push them in a bit more (past where they fit comfortably), then the volume decreases. I don’t mind it as I get a good seal with stock silicone tips and I get balanced volume if i don’t fiddle with the shells too much

in bore width? the shell material looks weird…like overly smooth. could be the colouring that’s throwing off the shading, though.

Yes. Sedna short and e-pro horn EP00 should be close as well!

Are you sure it is driver flex causing that and not that you start to deform the outlet of the tip decreasing it\s diameter?

The tips i’m using have are stiff and relatively thick stem, so I doubt i’m managing that. but you’re right in that i’m not 100% sure it’s driver flex; Canon shells are vented, so i’m not sure. i tried with other tips and could reproduce it

they look identical to the ones that come with the Kinera IDUN 2.0, which they call “K-285-02 Vocal Eartips”, since they’re using the accoustone tips from that one it’s likely it’s either another accoustine tip, or you could try emailing them to find the original

edit: didn’t realise you already said they came with an Urd, regardless you have the name for it and can maybe go off of that, i tried searching but couldn’t find anything