I’m just curious to hear people’s experiences of hype trains new and old. Have any of them ever lived up to the hype for you?

From my experience most if not all hype trains don’t really live up. Nothing else much to say on my part lol

The worst buyer’s remorse hype train I bought into were Monoprice M1060 and the Vokyl Erupts. I thought both were among the worst headphones I’ve ever listened to.

I also was a kickstarter for F13 the Game on PC and even played with the developers during the beta. The game actually got worse when it was released as the beta was actually more fun. The game was a huge disappointment, especially for me being a gamer and huge horror fan.

After resisting the hype on the Blon’s for so long, I got myself a pair about a week before the T4 drop. I just thought I’d ride this wave of IEMs that punch above their listed price. NOPE, paid $70 for trash, but at least I had a gift to give someone on x-mas.

Oh shit, I just realized that I still haven’t gotten my Erupts. I guess I should check up on that.

I agree even though we appear to be in the minority…I actually dislike Tin IEMs all together with exception of the Tin T2, no bass or low mids, all treble, cheap build and just not worth the price.

I’m never buying a Tin Hifi IEM ever again. Don’t get me wrong, the T2’s will have a special place in my heart because I came from using some Klipsch’s and KZ’s and it was a bit of an eye opener when I put the T2’s in my ears. Personally I think Tin’s living on borrowed time because everything outside of T2 just hasn’t been very good, IMO of course. P1’s would’ve been a debacle if I didn’t make them work for myself. P1’s with Final Audio E series tips, medical tape mod, crap ton of EQ to bring back the mids and highs, while listening on a tube amplifier (portable or desktop) is actually enjoyable.

Again, I fully agree with you. Ikko, Moondrop and other chifi iem companies are knocking it out of the park, so Tin will have to do something significant to compete at that level.

I seem to be in the minority of not enjoying the Tin T2 at all. I bought it cause of the hype and although I don’t think it’s particularly bad, perhaps I had too high of expectations for it. I just found the sound very unremarkable and not something that made me want to listen to them at all. I also find most IEMs uncomfortable. I can only wear the cheap apple earbuds for prolonged periods of time, and those are only for podcasts and calls. I guess IEMs just aren’t for me.

Ditto on the M1060. I improved them with mods but those midrange peaks are just a baked-in fatal flaw.

I’m not a huge fan of the Tin T2, but I do think that of all their IEMs, those sound the best comparatively speaking.

My most negative hype experience was the M1060. The Modi 3 and Magni 3 probably also on the negative list. They’re not THAT bad, but they don’t live up to the positive reviews they were getting from many sources, and within months it competitors were stomping their performance at the price point. The Modi 3 is definitely the worse of the two.

Both good and bad is the SP200. I love its power. But, I never had a WOW moment it with it. Probably because I moved to that from the Atom. Those two sound similar enough where the SP200 wasn’t an upgrade that really impressed me.

On the good hype side, I’ve had really good experiences with more established gear that was hyped. The SU-8, Atom, Liquid Spark, 6XX, 4XX, DT880 600 ohm have all been worth every penny and are all deservingly well-regarded products.

[edit: forgot to include DT880 on original list. Def belongs]

pretty cautious of hype trains coming from the PC and game world. Generally speaking I tend to be against early adoption of most new products let the brave souls with expendable income test it first lol. That being said i just preorderd an s20, hope it doesnt explode.

For Audiophile stuff. I jumped on the BLONs which i think live up to the hype. I’m not really in love with them but i do think they are an excellent value for the price although the price is a little deceptive because most people change the tips and wire.

Also the BTR5 not sure if this counts but there’s a lot of positive buzz around it. i would say this again very much deserves it’s praise really awesome device

I don’t form any expectations on unreleased products.

Hype kills products, as per this chart: 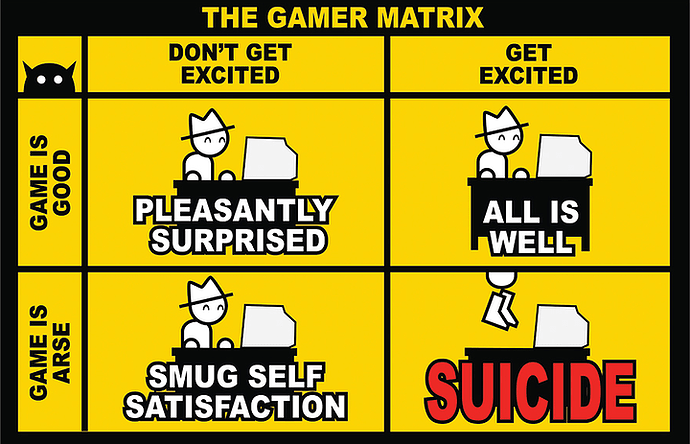 The DT 880 600 ohm is awesome. If it had a detachable cable, it would be the most sold in it’s price range imo. I used to own a pair and did a simple 3.5mm detachable cable mod using a dremel. Was totally worth it.

Very much agreed. I want to install a removable cable, but am terrified I’ll mess something up. On the plus side I have an older 32 ohm 990 that I passed down to the kids for gaming. Maybe I can practice on that one

Not a bad idea on the 990. I had a minimal knowledge and experience of soldering and dremel use…but there is a good tutorial by Demevalos on doing a detachable cable mod, just have to google it.

Side not that I had a cold solder joint on one wire in my left earcup. Thank God I did a listening test before moving forward.

I was thinking I might try splicing into the stock cable an inch or two from the ear cup and solder a female 3.5mm connector on it there. Might look like ass but should also be effective.

Yeah, the old superlux cable mod would work, but it does weigh down the rest of the cable from the driver solder points, so have to be careful.