Ant's Review of the Sennheiser HD58x

This is another of those headphones I keep hearing about. Often recommended to audiophile newbies this headphone retails for about 150$ They say it shares a sound signature with the HD660. Many people are saying this is the best deal for a cheaper headphone right now. 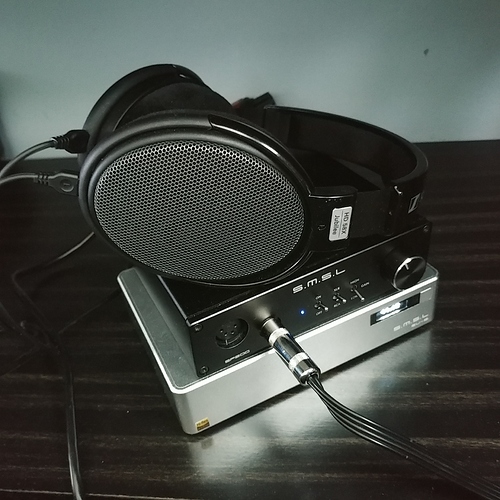 Neutral warm bassy. Bass on these is just great. great sub bass doesn’t bleed into the mids. I actually heard rumble on these. Mids are also great and forward. Vocals sound great. Though not as good as the HD600. Treble is fine, no sibilance. Detail is good. Imaging is great. Dynamics are great. Soundstage is close/medium.

Ive never heard of people having too much trouble with Sennheiser headphone builds breaking. Like its brothers and sisters in the HD series its all plastic except for the grill. These headphones need an upgrade. More metal and swivel would be nice. The age of plastic is over. Even STAX are introducing metal into their headphones. These cheap bastards.

These headphones have one of the tightest clamps in the world. I dont remember the HD600 being this tight. However these headphones could be a headbanger’s delight. They can Bob and throw their heads around as violently as they like and these headphones will not come off. Their brains take damage but these headphones certainly won’t. And the veil would work well with the distortion in the guitars.

we need more sweet and succinct reviews like this! more reviewers with this style, the easier it is to get a basic understanding of the pros / cons of a headphone to make a relatively educated buying decision.

however, I would point out that they are nothing like the HD660s and most talk of them being similar has discontinued…it’s the HD6xx and the HD650 that are twins, which is where that misinformation started / came from I suspect.

I thought a lot about it and worked on it to be so. and yeah in my research i heard people say it was like the 660. Zeos himself was also saying. hmmm interesting

Very nice, works for simple folk like me. I own them and pretty much agree, all pertinent points were hit.
All I would add; They are 150OHM and take well to power yet still manage to work well out of lightly powered sources.

I agree with your review. I think it is a nice sounding, very capable and cheap headphone. I may end up selling or trading them off down the road, but I am not looking to. I like putting them on every week or two to change things up.
I like them better than the HD600, but of course I do not have a tube amp to make the 600’s sing.

Thanks guys. fyi shane Mon thinks the hd600 sounds better on a tube amp than the 58x. i got my Dark voice coming but i got it on sale through drop. so not sure when thats gonna happen. i ordered it Jan 24. it still hasnt shipped lol

He mentioned the same to me when I traded for my 600’s. I am gun shy. I went out a few years ago and bought the HD6XX’s and an amp to power them. I was VERY underwhelmed.

My headphones are so efficient (except for the two Senns) that none of them would benefit from a tube amp. The thought of buying a DarkVoice, LD, etc. for just these 'phones and being underwhelmed again just pisses me off.

But I look forward to your review and comments.

the HD600’s are well thought of by all…just ask on Reddit and you will see what M0N feels is backed up by the community at large.

since the HD600 seem to fit my style of music (instrumental / strings) they’re my next headphone. I hope I can generate the funds to buy them with the ‘old’ version being reduced in price. I’ve seen them for as low as $400 CAD. alas, my cats are costing me…kitten came back yesterday after $960 of blood work and xrays with nothing conclusive found. he’s much better today, but was vomiting / diarrhea for 3 days and couldn’t hold even water down. poor guy was in rough shape. vet thinks he likely has some sort of intestinal inflammation, so he’s on a broad spectrum antibiotic, probiotic and something to help with the nausea. really feel for him as he was just neutered last Weds, so quite a lot to deal with. anyhow…I digress.

I hear you on the cats front. 2019 was an expensive one. Not even counting the monthly food/litter/medication costs.

Interested in doing any trading? You can message me, if you like. We could get you in those 600’s faster than you were planning!

are you in Canada, Shane? I’m not afraid of shipping across the border…but it costs more and can be a PITA

right now I’m content with my headphones I’ve got…do need to get a DAC n a couple amps…SS and Tube.

I do not have a pair of 660’s to verify with, but it was siad that the drivers in the 58X are exactly the same as the 660. I think this is where that comparison comes from.

That is not true, it uses a modified 5 series driver

That is why I offered. It wouldn’t be worth the hassle of going cross border.

well, only thing I have right now that I don’t want are the Blon BL08’s. I much prefer my Visio HP50’s to them, which is why I got them, to compare too.

I am not familiar with Blon BL08’s. The B20’s look interesting.

theyre an inexpensive closed back over ear. I bought em off Drop for $60 USD. they’re not bad, but not as good as the HP50.

Did you try popping out the foam behind the grill? A small amount of bass is lost but they sound more natural and open.

I think zeos was referring to them sounding closer to the 660 when that foam is removed. I wouldn’t know because I haven’t heard the 660. But I do like them more with the foam out.

I even kinda prefer them to my 650s to be honest. My 650s have a bit more detail and resolution to them but I think that 58x’s are a bit more fun. And appeal to different genres better. But that’s just me. They are a bit easier to drive as well so they sound better off of lower powered equipment.

My 650s have a bit more detail and resolution to them but I think that 58x’s are a bit more fun. And appeal to different genres better. But that’s just me. They are a bit easier to drive as well so they sound better off of lower powered equipment.

Yeah I think the 58x and 660s do better with more modern genre, also not as amp picky as you mention

Definitely. I use my 58x more but I can’t get rid of my 650s. I was lucky enough to pick them up new for like 150 4 years ago. Amazon messed up an order of mine once, and back then they made the mistake of giving percentages off of future orders instead of 10 dollar coupons lol. I got these and a 800 dollar monitor like 40 or 50 percent off.

I was surprised it worked! Lol.

Good little review. I got HD58Xs too and agree with that.