Short story: these are amazing. Get them or the Drop version

Long version: New job duties have me in front of my desk less, so I’ve been spending more time using my iems than usual. I’m not the biggest iem guy. I own Andromedas, BL03s, and P1s and a few others I rarely use. The Andromedas have always been my favorite iem. I think they sound closer to a full headphone than most of the other iems I’ve tried, but they are bright and can be a little fatiguing. I decided I wanted to look for something else, but I didn’t want to spend a ton of money-nothing close to the cost of the Andromedas.

I think my issue with iems is the way BA drivers sound. It’s pretty refined on the Andromedas, but still not my preference. I guess its the timbre? I tried the P1s hoping the switch to a planar driver would work for me the way it did for other people, but it never grabbed me. I thought about the Shouer Tapes, but I remembered I had done a little research on single dynamic drive iems and read how some people raved about them. I prefer dynamic headphones to planars, so I figured I’d give it a shot.

The JVC HA-FD01 is a weird idea. It shipped with 3 interchangeable nozzles-steel, brass, and titanium, but other than the metal it was made out of there was no other tuning done with each nozzle. So all 3 sound exactly the same. Pretty stupid, but if you do the simple mod spelled out by james444 at SBAF here https://www.superbestaudiofriends.org/index.php?threads/jvc-fd01-a-new-contender-for-best-dd-iem.6500/ , these go from super bright to pretty incredible. I may only be using these for portable for the foreseeable future and may end up selling the Andromedas. This tiny strip of rolled up gauze combined with whatever it is the dynamic driver is doing fixes all the issues I have with most iems. I’ve been listening since Friday and I prefer them to a lot of my headphones too.

Drop has them in stock for $240 right now. They also supposedly had their own version- the DROP + JVC HA-FDX1, but I don’t know that they will drop again or what the cost was. The difference is they apply the mod themselves so you don’t have to. If it costs any more than $250, I’d honestly just do it yourself. I’m not the modding type, but this took me a total of 2-5 minutes mainly because of my big dumb fingers. For $240, I couldn’t recommend these more

Thanks for bringing these up, I’ve perused them a few times. I noticed on Amazon they have two versions, one is a Japan Import ($310 US) and one is JVC USA ($290). Is there a difference in production or is it just color or something? Do we know which one Drop is selling? I’d assume it’d be the Japanese one, but assumptions get people in trouble. lol

The Drop version (FDX1) should be the same, the only difference is that they pre-install the mod. Their version is currently unavailable, and the version on Drop at the moment is the one you’d have to mod yourself. I’m not sure of the different listings on Amazon, but as long as it’s the FD01 and not the FD02 you should be good to go.

I can’t say enough good things about these. As good as or better than many $500+ headphones I own

Good deal man. Thanks for the info!

If you can, buy them from Drop. $50 cheaper and they are in stock, so they ship immediately

I’m listening to them right row at work, and I still love them. The Drop FDX versions only cost $10 more than the JVC un-modded version so it seems as though that’s the way to go if anyone is on the fence

Of all of my audio purchases, I think these may be about the best value performance for price of just about anything I own. I’d really love to hear if anyone else has had a chance to check these out?

Can you describe how they sound?

I’m currently saving up to purchase some new IEMs, and these are on my short list. Hopefully Drop will still have them when I’m ready to buy. The only problem is, I’m also saving up for a portable dac/amp and I’m not sure which to buy first.
I also own the BL-03s as my current daily driver IEM. I know you have commented on a thread of mine before to recommend these. (Thanks!) How would you compare the sound of these to the BLON?

Very good bass and midrange, and the mod tames the treble perfectly for my tastes. The stock version is way too bright. I went with the relaxed mod vs the reference one and don’t feel any more need to experiment. If I had to compare them to something else I owned, it would be my Fostex Ebony or E-Mu Teaks. It’s not quite the same, but has a similar timbre, probably from the dynamic driver. I personally just find DD iems to sound much more natural than BA iems. They aren’t as heavy as they look either if that’s a concern

It’s just a way more refined sound. The bass is there, but it doesn’t overpower the sound the way the Blons do. Both perform way above their price point, but the JVCs are significantly better

Anyone who owns these, I’d like to hear your opinion on the included cable and tips. Did you find a need to replace either?

The included cable is pretty decent to be honest. It’s not balanced, but it also has no memory wire so you can wear over-ear or down. The included tips are Spiral Dots, and I want to say I got 5 pairs with the non-Drop version. I like them, but they are wide-bore and can tend to emphasize the treble. I tried switching to a narrower Spin-Fit and it boosted the bass more than I’d like, but your preference may differ.

Thanks for the response!

Just wanted to know which filter you used for the mod? I have these coming tonight out of sheer curiosity (possibly a catch and release).

I got the non-Drop version and modded myself, so I’m not positive, but I think Blue is the filter equivalent that I use. Whichever filter has the most dampening. I wouldn’t bother with the stock tube, but I did hear that they tuned it to tame the treble compared to my non-modded version, so maybe it’s better. The partially dampened filter (green?) may give you a little more treble, but I didn’t need it personally. I own a lot of headphones and iems and these are definitely among my personal favorites, so I hope you enjoy them just as much. The sound they deliver is much closer to a headphone than most other iems I’ve used

@Nick_Mimi Hey Nick, have you had a chance to try the JVCs yet in your new iem trove?

Yes, and i swapped out thru the 3 interchangeable tips while listening to them but have not settled on a sound signature yet. They are a good value, actually all the IEM’s in the pile seem to be a good value respectively for their price points. I very much like the fact that i can swap the tips out and change the sound up. I have not listened to them long enough to speak to strengths or weaknesses but found nothing offensive about them. I also swapped ear tips for comfort and fully admit that the small tips i use that fit my stupid little ear canals best, I am using solely for comfort and not necessarily because they sound best. I find that if i can manage to stuff an IEM deep enough in my ear i get a particular fullness in the sound that i crave. I get complete isolation and a deepening of bass frequencies that i find enjoyable.
Thank you for recommending them i was not sure if i wanted another massdrop enhanced/made product, but these i am pleased w/and have no desire for the originals.

I have managed to get a few hours in w/ these tonight listening to old school blues, the old stuff thats got lots of flaws in the recordings no matter how much it’s been re-mastered. Absolutely no complaints, and really enjoying them.
I really like the fact that using the open tips opens up the high end and I like having the ability to modify the sound seconds away and at my fingertips. I put tiny little ear-tips on to manage to get them nice and deep in my tiny little ear canals and that’s how I find them most comfortable with full rich sound. 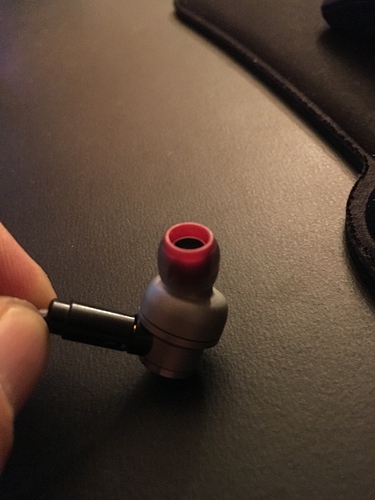