EDIT: According to John Yang this is solved in the 2012 batch.

Hey everyone, I’ve been seeing and hearing reports of topping L30 amplifiers blowing up and taking headphones with them.

I would ask that anyone who has experience with this problem contribute to this thread so we can get all the information in one place.

AS ALWAYS I encourage you all to do your own research on this! Resources will be attached for you to look though.

From what I’ve read a few instances seem to be random and a few seem to be from ESD (small static discharge).
Reports in Z’s telegram chat of HD600’s Focal utpoia’s, w5000, LCD-i4, and many other headphones damaged.
I’ve been TOLD but have not personally confirmed that topping is claiming no liability for people’s damaged headphones.

There’s a number of people in these threads who claim to have experienced their amps blowing up and sometimes frying headphones in the process.

r/headphones - My Topping L30 went out with a bang and killed one of my...

So sorry for your loss! :( I hope the company provides good customer service and compensates you for the collateral damage their product did to your headphones. Hopefully they will want to investigate what caused the problem so they can put the right...

Well, the L30 failed me in the worst possible way.... in a puff of smoke and taking my LCD-i4 with. Flipped it on and it was over that quick....

If you stack them I would buy RCA cables max 20 cm long. I got Straight wire cables, very nice. Schiit sells them too: Schiit Audio: Audio Products Designed and Built in California I also know a shop in the Netherlands that sells them: Straightwire... 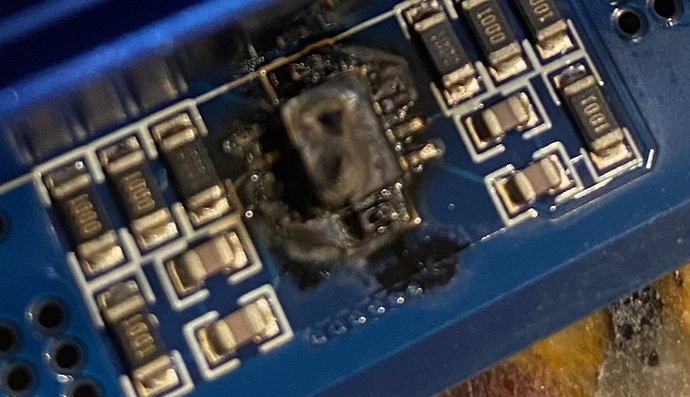 EDIT: IF THIS HAS HAPPENED TO YOU OR SOMEONE YOU KNOW: It’s been suggested that people list the last 4-5 of their serial number so the community can identify a range (or batch) that’s at risk of this problem.

one thing to consider is the E30 DAC uses a DC power supply, as is normal, and the L30 Amp uses an AC power supply, which is rare, and then uses a standard DC port for it. a potential reason for these being fried would be either upgrading the power supply without realizing it’s AC and not DC, or accidentally using the E30 power supply for the L30. I would still hold off on using the L30 at all, but it is an avenue for investigation

Yeah, I actually saw someone on reddit admit to doing that on accident. 16VAC vs 5VDC isn’t a good mix-up.

Thanks for getting more eyes on this, @DMS. @MazeFrame was the first to sound the alarm on this forum in the official L30 thread:

On the 7th January 2021, reports about faulty L30’s causing damage to headphones were posted to ASR, Reddit and SBAF. The cause of the fault are up to speculation, the nature of the failure suggests start-up current surge or electro static discharge to be the cause. Edit: One more report on head-fi

Although having a thread dedicated to this issue is a good idea.

My l30 went a few weeks ago, 2007 number and went for seemingly no reason. Was just plugged in to the wall, not in use. Ac adapter was what went in mine tho, not sure if the unit itself was damaged and i didn’t wanna test it (heard a pop and smelled the electrical burning smell). Got it replaced thru amazon and got a model number 2010 but still thinking about returning it.

Return it and get something else. Better safe than sorry.

just to confirm - you were using the correct AC adaptor? cause that throws that theory out, then

There are way too many cases at this point for that to be a possible cause.
I think it’s unlikely user error is the issue here, based on others accounts apparently this is not the first topping product that has destroyed headphones the original DX3 apparently had the issue and was redesigned to fix it.
plugging 5VDC into something expecting 16VAC would just result in no power anyway, the other way around could be an issue.

But the Topping guy said that it was only 4 out of 10k units that exhibited this issue. Now there’s more? How can that be?! /s

Schiit Asgard 1and Lyr 1 back then can kill headphones when power switch was switched off and on. They rectified that with issues with Asgard 2. These days though, Schiit's ESD problem should be minimal but nothing is guaranteed of course. I've had...

yup! i was using the one that came with the l30. The one that comes with the e30 is just a usb cord which i plug into my pc (edit. as an addition, my AC adapter came in bad shape, with the box having holes and dust in it. This is not the box the topping l30 itself came in but the internal box of the ac adapter)

I don’t know if this will help, but I’m posting anyway.

I’ve been using it daily as my main Amp (paired with the E30 DAC). So far, no issues, and this unit went through A LOT of power surges/outtages.

Maybe the ones that are having issues are from a very specific batch?

Schiit Asgard 1and Lyr 1 back then can kill headphones when power switch was switched off and on. They rectified that with issues with Asgard 2. These days though, Schiit’s ESD problem should be minimal but nothing is guaranteed of course. I’ve had…

FWIW Schiit actually paid to replace headphones when that happened.

There’s a number of people in these threads who claim to have experienced their amps blowing up and sometimes frying headphones in the process.

Looking at the picture posted by user “M3NTAL” to SBAF (the same that is in the OP here), I would say that is more than a claim.
I got another 2 pcb photos showing the same chip (probably an Op-Amp) blowing up.

Here is the photo of the back of the PCB by “M3NTAL”. The black spot in the Serial Number spot indicates something got pretty toasty. This is the only photo I have of the back (of a blown up L30). 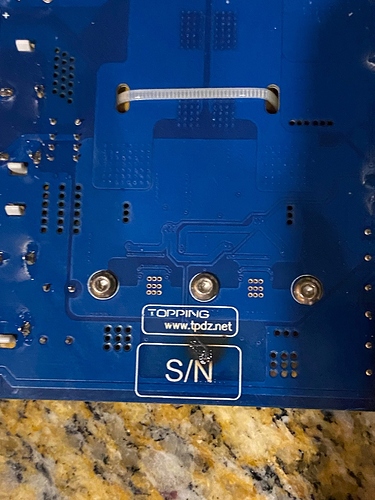 Concerning the layout of the L30: I looked at it a bit now trying to figure out how these can blow up. As I don’t have one myself (or access to my unis electronics labs), I am flying somewhat blind here, so take a grain of salt with the following:
(Picture from ASR review, with my markings) 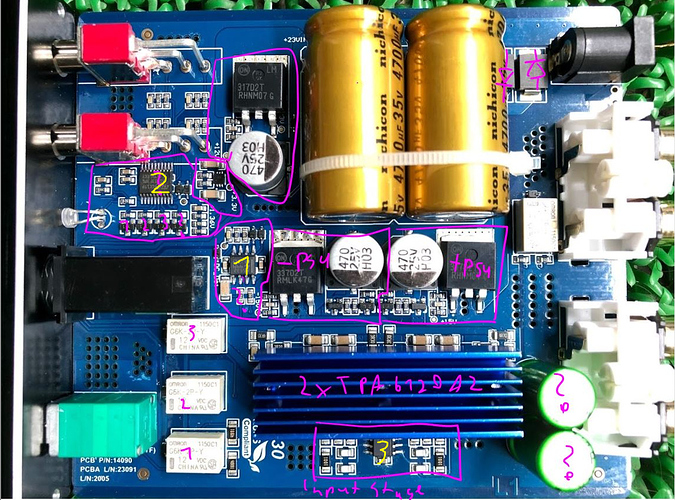 Concerning some of the theories I found on various sites:

Yeaaaaa I just returned my whole Toppings stack because of this concern…it may be an isolated incident but it is rather worriesome which is a shame because I actually liked it a lot the form factor and use of it is nice but the customer service side of things has me a bit worried.

I have already written in the L30 Thearth.
At the moment, China is on Christmas break, which means the whole of January.
And that as an L30 owner you should not use it until something new has been announced as a precautionary measure.

Furthermore, you can’t believe everything that has been written - a lot of it is exaggerated.
Especially in the Asr forum they condemn the L30 and almost sue John Yang.
Of course it is regrettable that the only statement is that only 4 units were affected and that everything was not so bad.
That is certainly not good and does not serve the interest of the owners.Then it would have been better not to write anything and to clarify the case carefully.
But he will also be on holiday.

At the moment, we can only wait until February for news.

As I read it, the warranty only covers the device but not the headphones if they are damaged.
Of course, that’s also bad and makes things even worse.
Which is understandable when a Focal or Audeze goes up in smoke that cost money.
One could now ask the question why one thinks to buy such headphones and connect them to a Chifi amplifier that is susceptible.
But you should not do that either, because it only leads to unnecessary discussions.

Hey! I’m the guy from the reddit post: not much to add to the story, the only thing I can add is that topping did not get my unit back to analyze since they could not arrange a pick up, and I’d have to arrange shipping to China ( I’m located in the EU).

I could not fully disassemble my unit, the pcb would not slide out. From what I’ve seen the caps were ok, no obvious damage. Since it’s going back to Amazon I did not want to go any further.

Hope it helps, please be safe with your L30, mine popped the coil from the driver, would not be great if against my ear.

What was the serial number and how long did it last?

Furthermore, you can’t believe everything that has been written - a lot of it is exaggerated.
Especially in the Asr forum they condemn the L30 and almost sue John Yang.
Of course it is regrettable that the only statement is that only 4 units were affected and that everything was not so bad.
That is certainly not good and does not serve the interest of the owners.Then it would have been better not to write anything and to clarify the case carefully.
But he will also be on holiday.

At the moment, we can only wait until February for news.

Therein kinda lies the rub though. Most people if they bought it recently like myself have a short window to return it. If it is such a small issue if they offered to compensate people repairs to their headphones (Or replace) then I would feel a lot more comfortable with them but that is not the case. Instead you are left with a gamble. If one can return it then it makes sense to do so and mitigate the risk. If one cannot then you are left with a quandary of should you then replace it? To me that is the bigger issue. These are budget amps so people who are using them presumably do not have the luxury of disposable income to sit there and replace their headphones that died simply because of a faulty amp design. All hardware fails in some capacity its just a matter of life that this happens. It is how the companies respond to it that matter.

Sorry I did not check before shipping it back, stupid mistake. Bought it for 11/11, used it daily without any problem till the 31/12, when it died.